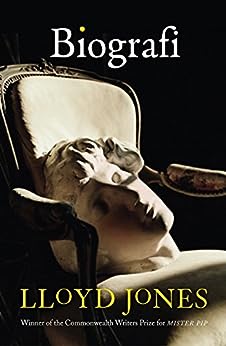 by Lloyd Jones (Author) Format: Kindle Edition
See all formats and editions
Sorry, there was a problem loading this page. Try again.
Biografi is an imaginative melding of travelogue and fable that sparked controversy on its release.

When Lloyd Jones visited Albania in 1991, six years after the death of dictator Enver Hoxha, he heard rumours of a village dentist who looked like the dictator and had been forced to give up his identity and become his public double. Jones' quest to find Petar Schapallo gives shape not only to an intriguing traveller's tale, but a story about identity-changed, lost or falsified-in a country where identity was strictly controlled.

Part travel narrative, part imaginative fiction, Biografi is an inquiry into the nature of identity itself.

'A fine piece of work, rich in startling detail.' Age

If I had not myself witnessed the lengths to which regimes such as Hoxha's are prepared to go to cheat and deceive, I should have been inclined to dismiss Shapallo's story as fanciful, and Jones as naïve for believing it (A. M. Daniels, Times Literary Supplement)

'Biografi starts big and then zooms in. This is Jones's skill: to draw tiny details that contain the world' (Katy Guest, Independent)

A gem of the genre (New York Times Book Review)

'This is a clever, surreal and mysterious read, certainly worth resuscitating' (Zoe Strimpel, City A.M.) --This text refers to an alternate kindle_edition edition.

From the acclaimed author of Mister Pip. --This text refers to an alternate kindle_edition edition.

Lloyd Jones is the author of ten novels, and is the winner of the Commonwealth Prize, the Montana Medal and the Tasmania Pacific Fiction Prize among others. In 2007, his first book to be published in the UK, Mister Pip, was shortlisted for the Man Booker Prize. He lives in Wellington, New Zealand. --This text refers to an alternate kindle_edition edition.
Read more

Lloyd Jones is the author of several novels and short story collections which include Mister Pip, winner of the Commonwealth Writers' Prize best book award and shortlisted for the Man Booker Prize in 2007, The Book of Fame and Hand Me Down World, which was shortlisted for the Berlin International Prize. He has also published a memoir, A History of Silence. He lives in New Zealand.

ND
4.0 out of 5 stars Biografi
Reviewed in the United Kingdom on 23 September 2012
Verified Purchase
Interesting concept of chasing the double of Enver Hoxha, an invented person, but entwined with an actaul journey of Albania in the immediate aftermath of the fall of communism. It gives a very good picture of what it was like at that time with people still worried about their biografis. The journey the author undertakes gives a picture of Albania in terms of its run down state, lack of food, bad roads, agriculture and some interesting characters met along the way including some living in exile villages where political exiles are sent, some new democracy leaders, dirvers, translators, ordinary people and a gathering of aid workers, many of whom gather in the Dahti hotle in Tirana. If you want to know about immediate post communist Albania and its characters, or what present Albania developd from this will give you a good understanding.
Read more
One person found this helpful
Report abuse

Rubik
4.0 out of 5 stars Albania in a nutshell
Reviewed in the United States on 7 December 2009
Verified Purchase
I was a Peace Corps Volunteer in Albania from 2008 to 2009 and in my opinion this book is still current. Reading it I was struck by how accurate and true-to-life a lot of his impressions are. The main drawback was a slight incoherency regarding his experiences outside of Albania, back in New Zealand, before and after the main body of work. This book should be required reading for anyone heading to the Balkans who wants a better idea of some of the hardships the region went through; obviously centered on Albania as it emerged from dictatorship and continues to struggle with free market entry today.
Read more
4 people found this helpful
Report abuse

Dana S. Stinson
4.0 out of 5 stars Easy, fun read about Albania
Reviewed in the United States on 30 September 2017
Verified Purchase
Fun travel-log about post-communist Albania
Read more
Report abuse
See all reviews
Back to top
Get to Know Us
Make Money with Us
Let Us Help You
And don't forget:
© 1996-2021, Amazon.com, Inc. or its affiliates