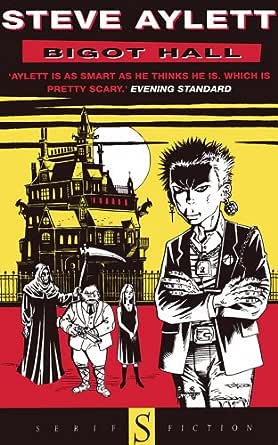 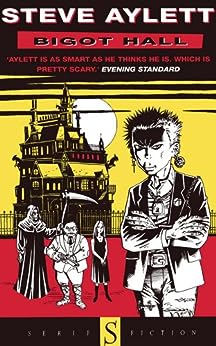 As English as marmalade and as crazy as California, a blisteringly sharp novel from the author of The Inflatable Volunteer

The Hall is a giant ascension machine in which the characters - Castanedan dreamers and stalkers all, except for our hero Laughing Boy - are the juice. Inside the escher folds they sit around talking bollocks till the cows come home.

Are the uncles really interchangeable? Will the annoying Roger Lang ever fuck off? Is deja vu really caused by people stating the bloody obvious over and over? Is Nanny Jack dead? Is the dog's opinion valid? Are there itches in the sky? Is the brain a parasite? What's with the Verger? Early pasta-hostile jokes mixed with body-horror, lucid dreams, etheric architecture and a few bits of satire. All disguised as a kid's book.

'Steve Aylett is without doubt one of the most ambitious and talented writers to emerge in England in recent years. While his work echoes the best of William Burroughs, it has the mark of real originality. It's hip, cool and eloquent.'
Michael Moorcock

'Aylett is one of the great eccentrics of British genre fiction.'
The Guardian

'The most original and most consciousness-altering living writer in the English language, not to mention one of the funniest.'
Alan Moore

'Shrewd and savage wit that scales astonishing heights ... A cult classic in the making.'
Melody Maker

'Aylett's distorting mirrors are crueller than most ... It's like the Addams family written by Peake on ecstacy.'
New Statesman
See all Product description
click to open popover

S. Michael Wilson
5.0 out of 5 stars "We are all God's children... whether he likes it or not."
26 January 2000 - Published on Amazon.com
Verified Purchase
Steve Aylett is one of those author's who are best recommended to others by merely pointing to his book repeatedly while nodding wide-eyed. Nothing you can possibly say can prepare someone for the twisted tales from Bigot Hall, although an easy attempt would be to describe it as The Addams Family, only darker, British, and considerably less polite. If you like black humor in a gothic vein, mixed heavily with poetic pseudo-logic that makes your eyes bleed, than this is the book for you.
As Laughing Boy so eloquently states, "The most amusing thing about a pantomime horse is the necessity of having to shoot it twice."

I spent the first few pages of this book alternating between offense and amusement. After a while, it hit me that I hadn't laughed out loud this many times per page at any book in quite a while, so I dropped the offense.

Imagine In God We Trust - All Others Pay Cash (the book that inspired the classic film A Christmas Story) jacked up on PCP and going on a crime spree and you have Bigot Hall, Steve Aylett's impressionist biography of hands down the most interesting family in all of literature. The narrator, a nameless adolescent called "laughing boy" by friends and family alike, turns his jaundiced eye upon most every family member and lodger at the family's country estate, a living (or at the very least highly unstable, from a dimensional perspective) mansion known as Bigot Hall. Amidst the witty repartee (and this would make a good handbook for those who like to find stultifyingly obtuse .sig files) these rather twisted characters come to life quite nicely, to the point where one can almost believe some of the book's most outrageous moments. I won't spoil them for you, you'll have to read it yourself, but let's just say Aylett pulled off a pretty nice chunk of real estate in making the Verger's predicament seem not only plausible, but completely in line with the rest of the doings about him.

As with all books of the "selected glimpses of life" genre, there's no plot here, so the book must rely on nothing but character development to succeed, and it does so quite nicely. It's also choke-on-your-manacles funny from beginning to end. ****

P. Godin
5.0 out of 5 stars Wacky
19 February 2003 - Published on Amazon.com
I laughed out loud many times when reading this. I became a huge Steve Aylett fan after reading Slaughtermatic and this collection of stories certainly doesn't disappoint. The episodes with Roger Lang and in general anytime Snap and the Verger get together are hilarious.
Read more
One person found this helpful

zmason@servicesoft.com
5.0 out of 5 stars An irony fractal mapped to the agony plane
8 March 1999 - Published on Amazon.com
If reading Borges, playing with the Mandelbrot set, and maiming mimes are three of your favorite passtimes, you may be so taken with this book that every other author starts to read like Jane Austen. Aylett's prose is a finely-crafted caustic, guaranteed to give purulent hives to every patch-elbowed realism Creative Writing workshop leader. Clever yet not unbelievably insipid. If every author less interesting than Steve Aylett was stacked like cordwood on the moon, Id be the last to ask questions.
Read more
6 people found this helpful

Eon
4.0 out of 5 stars Welcome to Steve Aylett.
3 March 2007 - Published on Amazon.com
This book will make you laugh, because it is very, very funny. I firmly believe this.
Read more
Go to Amazon.com to see all 6 reviews 4.1 out of 5 stars
Get FREE delivery with Amazon Prime
Prime members enjoy FREE Delivery and exclusive access to movies, TV shows, music, Kindle e-books, Twitch Prime, and more.
> Get Started
Back to top
Get to Know Us
Make Money with Us
Let Us Help You
And don't forget:
© 1996-2020, Amazon.com, Inc. or its affiliates