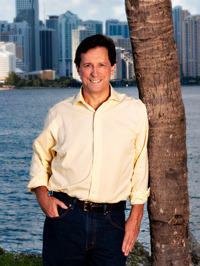 by James Grippando (Author)
4.3 out of 5 stars 221 ratings
See all formats and editions
Sorry, there was a problem loading this page. Try again.

"Miami attorney Jack Swyteck, boasting impressive success defending underdogs, takes up MacLeod's defense, but this may be his biggest challenge yet...Thriller veteran Grippando puts a strong criminal spin on the current political environment in this compelling entry in the long-running Swyteck series."

James Grippando is a New York Times bestselling author with more than twenty books to his credit, including those in his acclaimed series featuring Miami criminal defense attorney Jack Swyteck. Grippando was a trial lawyer for twelve years before the publication of his first novel in 1994. He lives in South Florida with his wife, three children, two cats, and a golden retriever named Max, who has no idea he's a dog.

Start reading The Big Lie: A Jack Swyteck Novel on your Kindle in under a minute.

4.3 out of 5 stars
4.3 out of 5
221 global ratings
How are ratings calculated?
To calculate the overall star rating and percentage breakdown by star, we don’t use a simple average. Instead, our system considers things like how recent a review is and if the reviewer bought the item on Amazon. It also analyses reviews to verify trustworthiness.

Mrs M . Waite
2.0 out of 5 stars Disappointing
Reviewed in the United Kingdom on 16 January 2021
Verified Purchase
I’ve read every Swyteck novel twice while waiting for a new one to come out as I didn't fancy this one but in the end thought I would give it a try and I wish I hadn't bothered. Difficult to follow the politics being a non American and got bogged down with an un -interesting story line and dumb characters
Read more
Report abuse

Kindle Customer
1.0 out of 5 stars First book I've ever returned
Reviewed in the United States on 1 March 2020
Verified Purchase
I read to get away from the current political nastiness. Surprise, surprise... James Grippando decided I needed to live it in fiction also. To say I'm disappointed in this book, is an understatement. I even pre-ordered it. First time I've ever requested a refund on a book.
Read more
48 people found this helpful
Report abuse

Kindle Customer
1.0 out of 5 stars Headlines
Reviewed in the United States on 28 February 2020
Verified Purchase
Cropland took today's headlines and tried to make a story. He failed. Charlotte is one of the dumbest characters I've read. The caricature of President Trump is ludicrous. And Jack can't get out of his own way. Sorry I wasted my money
Read more
42 people found this helpful
Report abuse

Mark Melum
1.0 out of 5 stars Triggered
Reviewed in the United States on 2 March 2020
Verified Purchase
Nothing more than a sad political statement. I enjoyed these books until the apparent need to make everything these days political.
Read more
33 people found this helpful
Report abuse

Amazon Customer
1.0 out of 5 stars Waste of time
Reviewed in the United States on 15 March 2020
Verified Purchase
I’ve read all the jack Swytek books and generally liked all of them which is why I preordered this one. This is Just a poor attempt at trashing President Trump, with a ridiculous storyline . Hope I can get a refund, and this author is off my list in the future.
Read more
29 people found this helpful
Report abuse
See all reviews
Back to top
Get to Know Us
Make Money with Us
Let Us Help You
And don't forget:
© 1996-2021, Amazon.com, Inc. or its affiliates