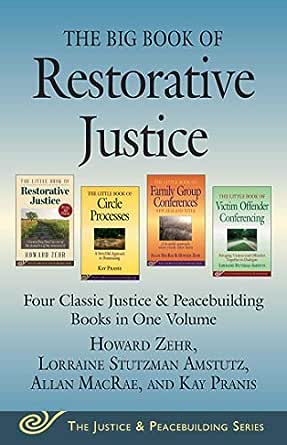 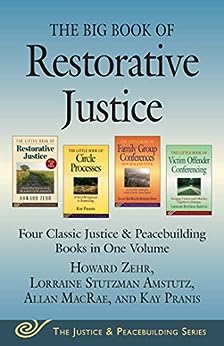 Howard Zehr directed the first victim offender conferencing program in the US and is one of the original developers of restorative justice as a concept. Zehr is the Distinguished Professor of Restorative Justice and the codirector of the Zehr Institute for Restorative Justice at Eastern Mennonite University. He lives in Harrisonburg, Virginia.

Allan MacRae is the manager of coordinators for the southern region of New Zealand, overseeing Family Group Conferences for both youth justice and care and protection. After receiving the National Supreme Award for Innovation, Allan developed a program in Wellington, which emerged as a leading model of youth justice. He lives in New Zealand.

Kay Pranis served as the restorative justice planner for the Minnesota Department of Corrections for nine years. Pranis has conducted circle trainings in a diverse range of communities—from schools to prisons to workplaces to churches, and from rural towns in Minnesota to Chicago’s South Side to Montgomery, Alabama. She lives in St. Paul, Minnesota.

Lorraine Stutzman Amstutz is the director of the Mennonite Central Committee’s (MCC) office on crime and justice. Lorraine has worked in the victim offender field since 1984 when she began working in Elkhart, Indiana, the site of the first Victim Offender Reconciliation Program (VORP) in the United States. Lorraine currently serves on the board of the local victim offender program in Lancaster County, Pennsylvania, where she lives. --This text refers to the paperback edition.

4.8 out of 5 stars
4.8 out of 5
66 global ratings
How are ratings calculated?
To calculate the overall star rating and percentage breakdown by star, we don’t use a simple average. Instead, our system considers things like how recent a review is and if the reviewer bought the item on Amazon. It also analyses reviews to verify trustworthiness.

Punt Mucker
5.0 out of 5 stars EXCELLENT INTRODUCTIONS
Reviewed in Australia on 21 August 2017
Verified Purchase
This is a compilation of four titles from the Little Books of Justice and Peacebuilding Series: the Little Book of Restorative Justice, Circle Processes, Family Group Conferences, and Victim Offender Conferencing. In concept and execution, each 'little book' explains the nuts and bolts of the framework to which the title refers, and provides further reading and notes for more detailed research. Excellent introductions to an important area of justice work.
Read more
Helpful
Comment Report abuse
See all reviews

Mary Louise
5.0 out of 5 stars Integrity Means Everything!
Reviewed in the United States on 29 May 2020
Verified Purchase
Excellent read! The book was a fast delivery.
Read more
Report abuse
See all reviews
Get FREE delivery with Amazon Prime
Prime members enjoy FREE Delivery and exclusive access to movies, TV shows, music, Kindle e-books, Twitch Prime, and more.
> Get Started
Back to top
Get to Know Us
Make Money with Us
Let Us Help You
And don't forget:
© 1996-2020, Amazon.com, Inc. or its affiliates