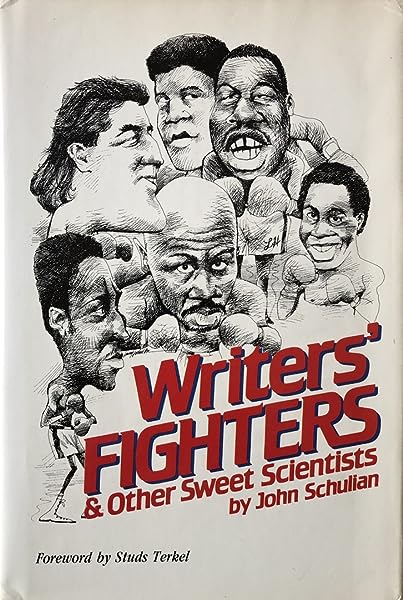 by John Schulian (Author)
4.2 out of 5 stars 14 ratings
See all formats and editions
Sorry, there was a problem loading this page. Try again.

Nick Pafko knows he can't be a professional boxer forever, but he never guessed it would end so quickly. Broke and unemployed, he has little choice but to work security for a massage parlor owned by a washed-up B-movie actor. Jenny Yee doesn't really mind massage, until the day she finds her coworkers robbed and assaulted. Fearing for her safety, she resolves to never work without security again. When Onus DuPree, a ''friend'' of the parlor's owner, decides to rob the joint, it's the perfect opportunity to beat up Nick and take advantage of Jenny. Can Nick stay true to his promise to protect Jenny? Can he protect himself?
Read more
Previous page
Next page

John Schulian has written for numerous newspapers and magazines, including the Los Angeles Times, the Oxford American, the Chicago Sun Times, the Baltimore Sun, and the Washington Post. In 1985 he won the Nat Fleischer Award for Excellence in Boxing Journalism before being recruited to Hollywood. There he wrote for LA Law, Miami Vice, and Wiseguy, before he became the cocreator of Xena: Warrior Princess.
Tell the Publisher!
I’d like to read this book on Kindle

Barely three months after his first novel, "A Better Goodbye," was published, John Schulian heard his name called as the winner of the 2016 PEN ESPN Lifetime Achievement Award for Literary Sports Writing. The book and the award caught up with him on the turf he staked out with yet another chapter in his career, a 20-year run as writer and producer for some of TV's most memorable dramas. Schulian spent a decade wandering the publishing industry's wasteland with the noirish "A Better Goodbye" before he found a publisher and saw his refusal to surrender rewarded with stellar reviews.

"Goodbye" is the tale of lost souls in rarely-seen precincts of Los Angeles, a melting pot stirred by a tragedy-haunted boxer, a college girl moonlighting as a sensual masseuse, a failed actor turned pimp, and a prison-hardened sociopath.The novel marks the latest turn in the career of the L.A.-born and Salt Lake City-reared Schulian. Before establishing himself as a nationally-syndicated sports columnist at the Chicago Sun-Times, he was a copy editor at the Salt Lake Tribune, a cityside reporter and pop music columnist at the Baltimore Evening Sun, and a sports writer at the Washington Post. He moved to Chicago in 1977 as a sports columnist at that city's Daily News. When the paper folded 13 months later, he shifted to the Sun-Times, where he won a National Headliner Award in 1979, was regularly in included in E.P. Dutton's annual "Best Sports Stories" anthology, and published a highly-regarded collection of his boxing writing, "Writers' Fighters and Other Sweet Scientists." Rupert Murdoch purchased the Sun-Times in 1984 and Schulian left less than six months later after a dust-up with one of Murdoch's editors. He landed at the Philadelphia Daily News long enough to win the 1985 Nat Fleischer Award for Excellence in Boxing Journalism, and then took off for Hollywood at the invitation of Steven Bochco, creator of "Hill Street Blues." Schulian broke into TV with an "L.A. Law" script and moved on to work on the writing staffs of "Miami Vice," "The 'Slap' Maxwell Story," and "Wiseguy." He was a writer-producer on "Midnight Caller," "Reasonable Doubts," and "Hercules: The Legendary Journeys" before he struck gold as a co-creator of "Xena: Warrior Princess," which became, for a while, the world's foremost syndicated TV series. He later wrote and produced such series as "JAG," "Outer Limits," and "Tremors" before shifting his focus back to prose.

Before, during and after his adventures in show business, he wrote for Sports Illustrated, GQ, the New York Times, the Wall Street Journal, the Los Angeles Times, the Oxford American, Inside Sports, Sport, Playboy, Deadspin, and msnbc.com. A collection of his baseball writing, "Twilight of the Long-ball Gods," was published in 2005, followed six years later by "Sometimes They Even Shook Your Hand," a gathering of his best work on all sports. His journalism has been anthologized in "The Best American Sports Writing," "Reading the Fights," "Sports Classics," "Sports Illustrated's 50 Years of Great Writing," "Sports Illustrated's Great Football Writing," and "From Black Sox to Three-Peats: A Century of Chicago's Best Sports Writing." Schulian was also editor of "Football: Great Writing About the National Sport" and "The John Lardner Reader" and co-editor, with George Kimball, of two anthologies, "At the Fights: American Writers on Boxing" and "The Fighter Still Remains: A Celebration of Boxing in Poetry and Song from Ali to Zevon."

Fiction took its place on Schulian's list of credits after the turn of the century, when he published short stories on the websites Thuglit and the Classical and in the Prague Revue. His novel "A Better Goodbye" was published in December 2015, a month before his 71st birthday. He is presently at work on a second novel. You can keep track of what he's up to at www.johnschulian.com.

Robert P. Brown
4.0 out of 5 stars Not Ellroy But Still Pretty Good
Reviewed in Canada on 28 May 2016
Verified Purchase
A washed up TV actor who owns a massage parlor in Los Angeles, his sociopathic ex con friend, the parlor`s security guard, ex boxer with a troubled past, a Korean masseuse with a rich client; all of them mixed up in a robbery scheme.

Since most of the action centers around the massage parlor, there`s a lot of sex involved, and since the author writes for TV, the dialogue is entertaining. Not a lot of suspense as one can pretty much see where things are going, but a nice depiction of the underbelly of L.A. life. Not quite in the class of James Ellroy, who made a career out of L.A. noir, but pretty good just the same.
Read more
Report abuse

Jim Thomsen
4.0 out of 5 stars A Cut Above More Clichéd Crime Fiction Fare
Reviewed in the United States on 28 June 2016
Verified Purchase
A BETTER GOODBYE is an uneven but never uninteresting debut crime novel.

Jenny is a little too smart and decent for the cynical, manipulative world of shady massage operations in which she makes her halfway way through life. Nick is a washed-up boxer who needs work — and beyond that, needs purpose. Onus DuPree is a stone thug looking for the next big score, and Scott Crandall is a fading pretty boy who no longer has Hollywood to fall back on. The four are on a collision course, and all trajectories lead to a high-rise "jack shack" in Los Angeles.

There's a "but" for every bit of praise or criticism I could offer for A BETTER GOODBYE. The prose is electric and kinetic, but occasionally sounds like a parody of Raymond Chandler. For every great line like "Dupree had ... elevator-shaft eyes that went all the way to the basement" there's a cringe-inducing sentence like "She came a heartbeat later, and then he did too, with cries that had their origins in primordial ooze."

The characters are all interesting, particularly Scott as the actor who doesn't know how to do anything but act and can't even act all that well. But it's hard to forget that for the most part, they're types rather than people — Nick as the down-and-almost-out boxer is every alienated-man redemption trope ever written; Jenny is every hooker with a heart of gold, or at least gold plating; and DuPree doesn't have much for the reader to connect to beyond a screenwriter-fantasy snarl.

What ultimately makes A BETTER GOODBYE worth reading is its insight — into the pathos of the fallen athlete, and especially into the shadowy world of massage that operates beyond the law. The types of men who patronize such places, the way they relate to the women, the way the women have seen it all and done it all and still make the stupidest possible choices about who to see outside of work. Author John Schulian is a career journalist of high renown, and his cultural anthropology reflects a deep and careful and unsentimental study of worlds you and I will rarely if ever see. That, and the occasional bit of singing prose — "It was a cold piece of blue steel with a snub nose and no serial number, and it made him forget about McQueen and feel more like Robert Mitchum or Lee Marvin back when film noir has hair on its a--"—make this noir-baked novel a cut above more wholly derivative fare.
Read more
One person found this helpful
Report abuse

Legal Thriller Reader
5.0 out of 5 stars A Sizzling First Novel that Packs a Wallop
Reviewed in the United States on 4 December 2015
Verified Purchase
It's hard to believe this is John Schulian's debut novel, though he has had a long and notable career as a sportswriter and television writer. "A Better Goodbye delivers a wallop, and not just because a protagonist is an ex-boxer who once killed a man in the ring. "Goodbye" is a searing examination of lost souls, wrong turns, and forgotten dreams. It’s a collision between the haves and have-nots, the has-beens, the wannabes, and the never-will-bes. Set in the sex trade that straddles the worlds of entertainment and crime, the novel is L.A. noir at its most keenly observed. Think Michael Connelly meets Elmore Leonard for a Metro ride from Universal City to Compton. Settle back, enjoy the view and listen to the sizzling dialogue. In Schulian’s world, nearly everyone has an angle in the hopelessly misnamed City of Angels. A confident, well-paced debut that will make you yearn for Schulian’s next novel.
Read more
One person found this helpful
Report abuse

Joshua Lurie
5.0 out of 5 stars A Better Goodbye. I never quite knew where the characters ...
Reviewed in the United States on 2 August 2016
Verified Purchase
Schulian built a growing sense of dread throughout his debut novel, A Better Goodbye. I never quite knew where the characters were headed, but I knew that they would eventually collide, and that it would get ugly. Along the way, I wanted to spend time with these people despite the fact that I never would have wanted to find myself in the same room as most of them. Onus Dupree, Jr. was especially menacing, and he didn't even need a pitbull, or weapon, to intimidate. I'm a fan of noir and (hopefully) an Angeleno for life, and A Better Goodbye captures the genre and city beautifully.
Read more
Report abuse