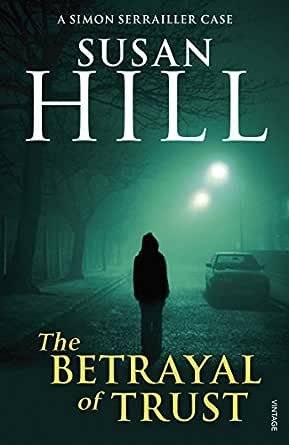 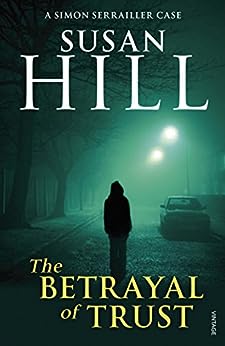 Susan Hill's novels and short stories have won the Whitbread, Somerset Maugham and John Llewellyn Rhys awards and been shortlisted for the Booker Prize. She is the author of over fifty books, including the five previous Serrailler crime novels, The Various Haunts of Men, The Pure in Heart, The Risk of Darkness, The Vows of Silence and The Shadows in the Street. The play adapted from her famous ghost story, The Woman in Black, has been running in the West End since 1989; it has also recently been made into a film starring Daniel Radcliffe.

Susan Hill was born in Scarborough and educated at King's College London. She is married to the Shakespeare scholar, Stanley Wells, and they have two daughters. She lives in Gloucestershire, where she runs her own small publishing firm, Long Barn Books. --This text refers to an out of print or unavailable edition of this title.

"Her intellectual stance is engaging, her plot unpredictable and her detective a likeable presence" (Hannah McGill Scotland on Sunday)

"Far more than a whodunit...written with a novelist's flair, in that the characters, however fleeting, are carefully drawn and believable" (Leslie Geddes-Brown Country Life) --This text refers to an out of print or unavailable edition of this title.

A cold case comes back to life in this sixth book in the highly successful Simon Serrailler detective series 'eagerly awaited by all aficionados' (P.D. James) --This text refers to an out of print or unavailable edition of this title.

'Susan Hill's Serailler novels, with their persuasively drawn copper and his equally well-rounded family, are a real treat.' Daily Express

'A crime series that specialises in sidestepping conventions, always to exhilarating effect ... These books succeed in harnessing all the genre's addictive power while maintaining a complexity and fascination entirely their own.' Independent

Simon Serailler is faced with that most complicated of investigations - a cold case.

Freak weather and flash floods all over southern England. Half of Lafferton is afloat. A landslip on the Moor has closed the bypass and, as the rain slowly drains away, a shallow grave - and a skeleton - are exposed.

It doesn't take long to identify the remains as those of the missing teenager, Harriet Lowther, last seen carrying a tennis racket while waiting for a bus. But that was sixteen years ago.

How long will it take to trawl through the old, stale evidence and assess it anew? The Lafferton force is struggling with staff shortages and economies, and Simon has to do a lot of the legwork on his own. Meanwhile, his sister, Dr Cat Deerbon, is fighting for extra funding for the hospice which is threatened with cuts and closures.

All of the Simon Serailler novels offer more than merely a murder mystery, and The Betrayal of Trust is no exception: it takes a brave, truthful look at old age and the associated problems of terminal illness which, in the future, will bring our society to the brink of painful conflicts of conscience.

Susan Hill's gifts are displayed here to dazzling effect: her empathy and understanding of the human heart, her brilliance when evoking character and her tremendous powers of exciting storytelling.

4.4 out of 5 stars
4.4 out of 5
495 global ratings
How are ratings calculated?
To calculate the overall star rating and percentage breakdown by star, we don’t use a simple average. Instead, our system considers things like how recent a review is and if the reviewer bought the item on Amazon. It also analyses reviews to verify trustworthiness.

Dr. Patricia M. Vezgoff
4.0 out of 5 stars The Betrayal of Trust
Reviewed in Australia on 3 July 2020
Verified Purchase
I have now read the frst six books in this series. All have explored current issues using the Serallier family as the background to present themes in both medicine and crime. Interweaving of the particular themes highlighted in each book, in this case euthanasia, a cold case, and the personal problems of the Serallier siblings allserve to keep the reader interested. However, if you want a book which neatly resolves all the issues presented in the body of thhe work yu have chosen the wrong author. Hill believes in leaving the rader hanging.
Read more
Helpful
Report abuse

Marilyn Andrew
5.0 out of 5 stars Didn’t want it to finish
Reviewed in Australia on 1 February 2021
There are several story lines going on.kept in the dark how Susan was going to pull it all together. She does it with great skill. The pace characters and plot are well,constructed and have you guessing to the last page. Read and enjoy!
Read more
Helpful
Report abuse
See all reviews

ChrisT
4.0 out of 5 stars a lot of loose threads................
Reviewed in the United Kingdom on 5 September 2020
Verified Purchase
So far, all the Serailler books I've read have three main threads, the crime or crimes that are being investigated , Simon's complex relationships with his family and various social issues. In previous books these have been drugs, prostitution, racism, alternative therapies - in this story its motor neuron disease and dementia, the hospice care available to sufferers and as a final resort, euthanasia. It says a lot for Susan Hill's writing skills that she manages to blend all these elements into the story although I sometimes find it disconcerting when she jumps from one sub plot or character to another. Anyway at the end of this book the identity of the murderer is revealed but a lot of questions remain unresolved - I'm just about to start reading the next in the series 'A Question of Identity' so I'm hoping at least some of them might be answered!
Read more
One person found this helpful
Report abuse

Ellie Hasard
3.0 out of 5 stars Too many themes - overall lack of balance
Reviewed in the United Kingdom on 7 May 2018
Verified Purchase
I find this series quite compelling because of the ongoing storylines about Serrailler's family, which often take over from the detective elements of the plot as regards tension and readability. In this particular episode, the murders really take a back seat; towards the end Serrailler almost seems to lose interest in them.

I would like to know what made Susan Hill paint quite such a bleak picture of the Swiss clinic where one of the characters goes for the purpose of assisted suicide, only to change her mind at the last minute and return to Lafferton. This is a very complex theme to tackle within the scope of a detective novel, especially when intertwined with another sub-plot involving dementia and an unscrupulous care home owner. It seems a rather heavy burden to lay on the reader.

In comparison, the portrayal of the rapidly-burgeoning love affair between Simon and Rachel seemed to me trite and cliched. I couldn't quite believe in it, and was rather bored by it. In fact this was the point at which my interest really switched from Simon to his sister Cat and the rest of the family, and it will be to find out what happens to them that I carry on reading.
Read more
4 people found this helpful
Report abuse

M. Harris
4.0 out of 5 stars Cold Case Conundrum
Reviewed in the United Kingdom on 26 January 2021
Verified Purchase
Yet another well written tale that kept me hooked from start to finish. Serrailler and his family are at the heart of this book. Cat struggles with life without Chris. Serrailler struggles to investigate a cold case with limited budget and team to support him. The relationship with his father and stepmother throw up issues as does his barren love life. Other stories around dementia and end of life options run parallel alongside the main plot. As often with this series it had an abrupt end and left me wondering and somehow cheated. What happened to Jane and is Rachael going to disappear? Recommend
Read more
Report abuse

Sandradan1
4.0 out of 5 stars A thought-provoking drama about the bonds between us
Reviewed in the United Kingdom on 25 September 2015
Verified Purchase
The trust betrayed is marital, parent/child, doctor/patient, in a thought-provoking drama about the bonds between us – personal and professional – and the responsibilities we bear.
Exploitation, dominance and manipulation should not belong in the patient/carer sphere, but here Hill examines the difficult zone of terminal illness.
Heavy rains and floods reveal first one skeleton, then another. The first is identified, the second is a mystery. Simon Serrailler must investigate, working almost on his own as police cutbacks see drug busts getting more staff than his investigative team. And then at what promises to be a dull evening, an official dinner at which he wears his police hat, he falls instantly in love: never a convenient time, for all sorts of reasons. In the midst of love at first sight we see a different Serrailler, not in control of the situation, distracted, wracked by longing.
This is the sixth in the series, but unlike other crime series you can read these in or out of order. Of course there are references to long-running storylines – all related to the Serrailler family - which may pass you by if you read them out of order, but that will not affect your enjoyment of the story. Susan Hill crafts her book well, as both stand-alone detective story, and long-term story arcs. But if you can, read from the beginning.
Read more
2 people found this helpful
Report abuse

The Cosmic Whelk
3.0 out of 5 stars highly unsatisfying ending!
Reviewed in the United Kingdom on 30 January 2013
Verified Purchase
i'd liked the other Serrailler novels so much - and i was thoroughly getting into this one and enjoying it, when... it suddenly came to an end! there were so many loose ends left hanging i don't know where to begin - in fact i won't even try, because i don't want to spoil this book for anyone.
most of it was great, but i felt it could have run to at least four more chapters. what a great shame, because this book was really shaping up to be first rate: attempting the difficult issue of assisted suicide, for instance, with what felt like a (fairly) open mind. i think if Susan Hill were not such a respected novelist - indeed, if this was a first book by an unknown writer - her editor would have pressured her to resolve all the threads thoroughly at the end, and not dump everything in an inconclusive heap.
Read more
7 people found this helpful
Report abuse
See all reviews
Back to top
Get to Know Us
Make Money with Us
Let Us Help You
And don't forget:
© 1996-2021, Amazon.com, Inc. or its affiliates