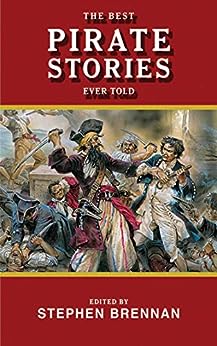 by Stephen Brennan (Editor) Format: Kindle Edition
See all formats and editions
Sorry, there was a problem loading this page. Try again.
Over the years, thousands of tales both true and fantastic have been told about the dastardly thievery of pirates, and their rum-drunk exploits and high-seas violence never fail to delight. Now in a brand-new series collection, The Best Pirate Stories Ever Told includes many of the very best pirate yarns ever created on history’s most debaucherous scalawags. Anyone who loves a good story full of excitement, adventure, thrills, and laughs will find this collection irresistible.

The stories, songs, and verses include writing by Daniel Defoe, Mark Twain, Joseph Conrad, James Fenimore Cooper, Robert Lou- is Stevenson, and many more. Moving through the pages of time, this collection will take you from the dastardly deeds of ancient pi- rates to the extravagant exploits of classical times. Each story offers swashbuckling adventure that will send you all over the world, from the dangerous currents of the Mediterranean to the sandy beaches of the Middle East. Whether it’s a historical overview of ferocious pirate activity that defined the seas of the past, an in-depth look at a smarmy captain of the high seas, or a boyhood frolic in a world of danger and doubloons, this collection will please any lover of the bandits of the ocean who wants to experience the deadly world of pirates without the risk of walking the plank. This fantastic collec- tion is full of illustrations that bring to life the adventures of those daring dogs of the seven seas.
Read more
Previous page
Next page
Due to its large file size, this book may take longer to download

Stephen Brennan is the author of The Adventurous Boy’s Handbook and The Adventurous Girl’s Handbook. He has also edited and arranged An Autobiography of Theodore Roosevelt and An Autobiography of General Custer, among others. He has worked as a circus clown, book editor, teacher, cabaret artist, actor, director, shepherd, and playwright. He resides in New York City and West Cornwall, Connecticut. --This text refers to an alternate kindle_edition edition.

3.5 out of 5 stars
3.5 out of 5
23 global ratings
How are ratings calculated?
To calculate the overall star rating and percentage breakdown by star, we don’t use a simple average. Instead, our system considers things like how recent a review is and if the reviewer bought the item on Amazon. It also analyses reviews to verify trustworthiness.

R H E
2.0 out of 5 stars So so
Reviewed in the United Kingdom on 10 June 2019
Verified Purchase
Not what I was expecting
Read more
Report abuse

Tim Jovick
4.0 out of 5 stars Comprehensive, geography AND maritime history, many tales, authors, but uneven quality.
Reviewed in the United States on 8 February 2017
Verified Purchase
I picked this ebook up on BookBub for a very low price; caught my eye as a big fan of “Talk Like a Pirate Day.” This is a BIG book and took me almost a full year to read it, bouncing between this one and others. It’s hard to describe it in a few words, as it’s so comprehensive. So let me describe some features:

The book starts out with piracy in the ancient world, and I found I went to Wikipedia numerous times, mostly for maps of the Adriatic and Mediterranean Seas, which is where those rascally curs plied their piratical trade. Indeed, I came to see this whole book as a great lesson on world geography, from the Caribbean to the Indian Ocean to New Zealand to China and points inbetween. In this facet alone I felt this was a great book, and indeed one can view it as a text on maritime history, describing not only voyages and plundering but also the everyday life of a sailor. There are perhaps twenty descriptions of piracy throughout the ages, with a notable story about how Caesar was kidnapped by pirates and bargained with them to raise his ransom because he was such an important personage.

The next section describes captains, including Bluebeard, Blackbeard, Barbarossa John Rackham and his two notable females, Anne Bonney and Mary Reade, competent captains in their own right. This section also contains some chapters which are the legal proceedings against pirates, along with the verbatim accounts of the accused themselves, as well as the sentences (mostly hanging). While these were somewhat interesting, they were quite dry and plodding, as befits legalese. Nonetheless, the back stories of these notorious captains were very intriguing.

The next section is “Pirate Song and Verse,” which is both, being descriptions of pirates and songs of the pirates, including some quotes and last words of a number of them. The longest is an 1814 poem, “The Corsair,” by Lord Byron. Wikipedia indicates that this was perhaps based on the life of Jean Lafitte, and was extremely popular in its day. Well, for me it was interminable and very difficult to get through, largely, I think, because of the quirky 19th Century English, within which I lost the story line many times. But I digress.

The last part, “The Tales,” is a collection of fiction, mostly quite enjoyable, including an early chapter from Joseph Conrad’s “Lord Jim” and the first chapter of “Treasure Island.” The entire book is sprinkled with entries from well-known authors and adventurer, such as Daniel Defoe, John Seawall, Howard Pyle and Mark Twain.

All in all, I found this book enjoyable and educational and I’d give it four stars and would recommend it, as long as you are forewarned that it’ll take you some time to get through it and that some parts are not as enjoyable as others.
Read more
12 people found this helpful
Report abuse

owler
2.0 out of 5 stars Thought it would be intertaining
Reviewed in the United States on 12 July 2019
Verified Purchase
Was looking for an easily read pirate story book. Instead, it's an in depth treatise on different pirates. Great, but not the light reading book I was looking for.
Read more
One person found this helpful
Report abuse

Kindle Customer
4.0 out of 5 stars Many pirates
Reviewed in the United States on 26 August 2019
Verified Purchase
I enjoyed reading about this part of history. I could have used a little more detail about the pirates, and their part in the American revolution.
Read more
Report abuse
See all reviews
Back to top
Get to Know Us
Make Money with Us
Let Us Help You
And don't forget:
© 1996-2021, Amazon.com, Inc. or its affiliates