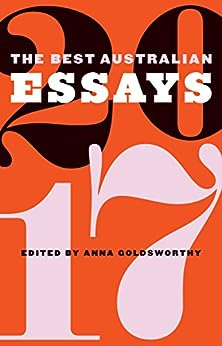 The Best Australian Essays showcase the nation's most eloquent, insightful and urgent non-fiction writing. --This text refers to the paperback edition.

Anna Goldsworthy is the author of Piano Lessons, Welcome to Your New Life and the Quarterly Essay Unfinished Business: Sex, Freedom and Misogyny. Her writing has appeared in the Monthly, the Age, the Australian, the Adelaide Review and The Best Australian Essays. She is also a concert pianist, with several recordings to her name. --This text refers to the paperback edition.

Hattah
5.0 out of 5 stars Perfection
Reviewed in Australia on 24 February 2018
Verified Purchase
Perfectly selected and written essays that quite rightly and deservedly are called the 'best.' Perfect and utterly satisfying reading. Thanks Anna
Read more
Helpful
Report abuse
See all reviews

Bobbie Simko
5.0 out of 5 stars Love
Reviewed in the United States on 19 March 2019
Verified Purchase
Love
Read more
Report abuse
See all reviews
Back to top
Get to Know Us
Make Money with Us
Let Us Help You
And don't forget:
© 1996-2021, Amazon.com, Inc. or its affiliates