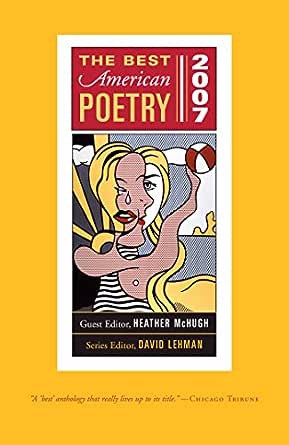 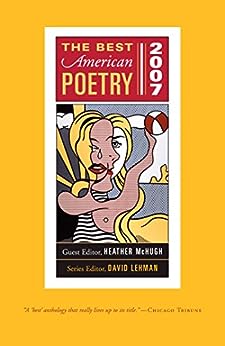 "Each year, a vivid snapshot of what a distinguished poet finds exciting, fresh and memorable: and over the years, as good a comprehensive overview of contem-porary poetry as there can be." -- Robert Pinsky "A 'best' anthology that really lives up to its title." -- Chicago Tribune --This text refers to an alternate kindle_edition edition.

David Lehman, the series editor of The Best American Poetry, is also the editor of the Oxford Book of American Poetry. His books of poetry include Poems in the Manner Of, New and Selected Poems, Yeshiva Boys, When a Woman Loves a Man, and The Daily Mirror. His most recent nonfiction book is Sinatra's Century. He teaches at The New School and lives in New York City and Ithaca, New York. --This text refers to an alternate kindle_edition edition.

me
2.0 out of 5 stars a few pleasures
Reviewed in the United States on 13 December 2008
Verified Purchase
To Heather McHugh's credit, she's up front in her introduction about what criteria and biases she brings to her selections of the "best" in American Poetry. But that doesn't save the collection from being eminently disappointing. As many others have noted, this is a series of poems that play with sounds (I know, that sounds redundant)--but then it's not much more than that. The formula seems to be: 1) sing some sounds to yourself; 2) when they take the shape of words, write them down; 3) make big margins; 4) publish poem in BAP 2007. ("I met the Duck and Duckess of Windsor," Frederick Seidel writes in a typical line from the book.) Some of this is quirky and fun, but after a while it grows tedious and even makes you wonder how original any of this material is if it all sounds so much the same. Each year's collection requires an entire reading to find the gems, but this edition requires much more work than usual. Ultimately it's worth it--there's three or four poems that will please you--but the series editors really need to be more responsible about what they call the book. Granted we will never solve the formula for "best," but "Poems Heather Likes" would be much more accurate.
Read more
3 people found this helpful
Report abuse

Em Aitch
5.0 out of 5 stars Surface and depth
Reviewed in the United States on 1 August 2008
Verified Purchase
I assisted a stoneworker once in the construction of a foundation. From a large pile of stones he was adept at quickly finding those which the wall required, the shape of substance equal to the shape of absence, soon filled. He said it was largely a matter of having scanned the available material and letting his unconscious mind direct him to a conscious, and mostly correct, choice. Of course, in using language, we do something similar, swiftly rummaging through the word hoard for the thing we wish to say, hoping it will be solid, and something to build on. Heather McHugh delves into the matter itself, its interstices, gaps, and echoes, and into the material of what we mean, and are often unconscious of. The effect can be disquieting, calling the solid into question, shaking the foundation. Attention and alertness are required to read her work, and they are also the reward. The fort in comfort falls, and sometimes, in the landscape that was blocked, the delight of uncertainty and insecurity is revealed, if we are willing to stand it.
So I think McHugh selected poems for the Best American Poetry 2007 with something like this in mind. Are all of them best, or even better? Maybe not. Some require more unraveling than I have patience for, others seek to dazzle but tend to dizzy. That said, I have found the best way to read the book is here and there, now and then, to let accidents have their way with me. "Only surfaces interest me," writes Amit Majmudar in one of my favorite poems. "What depths I sound I sound by accident". But accidents, I think McHugh would agree, and the apparently random, favor the awakened mind.
Read more
2 people found this helpful
Report abuse

Elizabeth Mourant
5.0 out of 5 stars Nuanced
Reviewed in the United States on 6 October 2016
Verified Purchase
I read this during a hurricane. The lightning and thunder. sad well as sheets of water. It was perfect in its way. Worth a leisurely read.
Read more
Report abuse

Robert of Lakeland
5.0 out of 5 stars The Best is THE BEST!
Reviewed in the United States on 21 April 2015
Verified Purchase
A MUST READ for anyone seriously interested in poetry.
Read more
Report abuse

Alain
5.0 out of 5 stars all good
Reviewed in the United States on 3 February 2013
Verified Purchase
the product arrived in perfect conditions. it took the necessary time to get to my address. there was no need to contact the sender. i am really satisfied with this purchase.
Read more
Report abuse
See all reviews
Get FREE delivery with Amazon Prime
Prime members enjoy FREE Delivery and exclusive access to movies, TV shows, music, Kindle e-books, Twitch Prime, and more.
> Get Started
Back to top
Get to Know Us
Make Money with Us
Let Us Help You
And don't forget:
© 1996-2020, Amazon.com, Inc. or its affiliates