Bernice Takes a Plunge (According to Bernice Book 1) and over 1.5 million other books are available for Amazon Kindle . Learn more
Share <Embed> 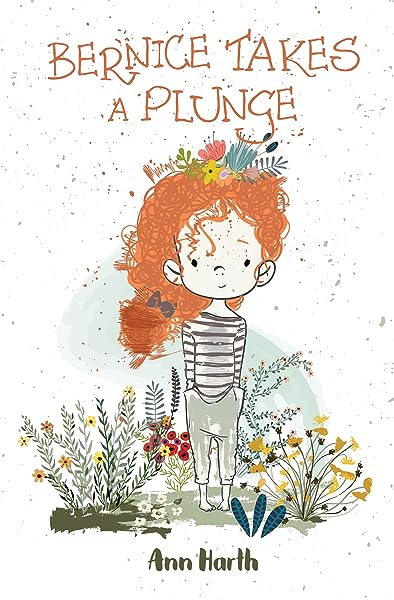 FREE expedited delivery and up to 50% off RRP on select top books.
Explore our selection of bestsellers, new releases, children's books, fiction, non-fiction, cookbooks and more. T&Cs apply. Shop now
click to open popover
Start reading Bernice Takes a Plunge (According to Bernice Book 1) on your Kindle in under a minute.

Ann Harth writes fiction and non-fiction for children and adults. Strong, interesting female characters creep into most of her books, and many arrive with a sense of humour. Before becoming a writer, mentor and developmental editor in Far North Queensland, Ann studied psychology, waited tables, bar-tended, picked strawberries, worked as a clown and punched keys on various tills. She also spent ten years working with children with special needs. Ann taught writing for the Australian College of Journalism for eight years before taking the leap into freelance work. Ann is the Far North Queensland representative for The Society of Children's Book Writers and illustrators. She's had a number of fiction and non-fiction children's books published in Australia and the UK and over 120 short stories sold internationally. When not tapping the keys, Ann stuffs a notebook into her pack and searches for remote places to camp, hike or explore.

Mark ODwyer
5.0 out of 5 stars A robbery, a mystery, and a intrepid heroine with a vivid imagination
Reviewed in Australia on 15 August 2020
Verified Purchase
‘Bernice Peppercorn’s imagination fills her mind and her notebooks with adventure and intrigue‘ (From the back cover of Bernice Takes A Plunge.)

Bernice loves to write. She fills her notebook with ideas for her stories, some of which star herself rescuing her favourite star, Crystal Bell, from a terrible fate such as a shark attack. To get ideas she takes careful notes of the goings on in her town and it really isn’t her fault that the suspicious things she observes and reports to Sergeant Bailey turn out to have explanations not involving kidnappings and detonators after all.

Bernice arrives on the first page totally believable and loveable. This middle grade book has everything: an annoying brother (why are brothers annoying anyway- is it some sort of rule?), a disappearing sock, a celebrity in town, an intriguing theft, a strange fisherman with a wooden leg, a mysterious island, and high drama on the open sea. We have a moral conundrum too as Bernice fibs a bit, well, a lot to the strange fisherman, but we smile as she struggles to work out this dilemma. As for the plunge business .. Ah, well, you see, that’s all in the book!

‘Suddenly my hat was tugged off my head. A fisherman had hooked it as he cast into the ocean .. A dolphin leaped into the air and grabbed the brightest thing he could see. He tore it from the hook …’ From Chapter 10.

This is a fun read not just for middle graders but also for parents who may well recognise endearing but perhaps also exasperating traits in their own aspiring heroines. I finished it hoping that author Anne Harth will bring Bernice back in a sequel. And here are questions to ponder:
Did leaping dolphins really snatch all of Bernice’s lost hats?
Will Bernice’s special goo really cure her friends chickenpox?
Will Bernice’s brother ever discover what she did with his bath towel?

Anne Harth, creator of Bernice, writes fiction and non-fiction for children and adults. ‘Strong interesting female characters creep into most of her books, and many arrive with a sense of humour.’ (Afterword, About the Author.)

Rachael
5.0 out of 5 stars You can't help but love Bernice!
Reviewed in Australia on 3 April 2020
Verified Purchase
Bernice Rose Peppercorn's life is peppered with her lively creative imagination and adventures. She seeks out stories everywhere - which some people say are only in her head. When local celebrity Crystal Bell is robbed, Bernice is on the alert for clues. Only Ike, a one-legged-fisherman, believes her and they take on the high seas to recover Crystal's gems and nab the robber. An exciting and engaging book for readers of all ages. Ann Harth never disappoints, and Bernice , who you can't help but fall in love with, is her best book yet. Outstanding,
Read more
Helpful
Comment Report abuse

Bernice Takes a Plunge is a really wonderful story by Ann Harth. This book is aimed at children between 8 and 12 years old- but really can be enjoyed by all ages- as I thoroughly enjoyed the story and I am waaay older than that.
This is a delightful and original adventure- full of fun, mystery, a little drama, endearingly quirky characters, and humour- with a really interesting storyline.
Bernice Peppercorn steals the show here- she is just fantabulous! A little mini sleuth with quite the imagination. She is so obsessed with mystery and crime that she tends to jump to conclusions. She has quite the reputation for ‘reporting’ crime, where there isn’t any. So, what happens when a real robbery happens in town? Will Bernice find the clues that she needs and track down the robbers? This is definitely worth the read to find out how everything plays out in the end.
Supercalifragilistic!

Pomegranate
5.0 out of 5 stars A Fun Read!
Reviewed in the United Kingdom on 23 June 2020
Verified Purchase
This book fizzes! I enjoyed every moment and really took to heroine Bernie and her (long-suffering) mum and brother. Bernie, often misunderstood, is a bright, lively girl with an enquiring mind and a habit of losing sun hats, which can be annoying when you live in Australia! The book has a great cast of supporting characters, with scary moments and sound effects handled brilliantly by Ann Harth, an author who has the gift of transporting the reader right into the action.
Read more
Report abuse

John Raynor
5.0 out of 5 stars Fascinating read
Reviewed in the United Kingdom on 23 July 2020
Verified Purchase
Bernice Peppercorn is an imaginative, well-meaning girl where everything she observes turns into some sinister plot, getting herself into a great deal of trouble, yet seeks the assistance of Ike, a one-legged fisherman. An interesting and quite humorous story
Fascinating to learn that the author Ann Harth’s son tested Bernice’s idea to simulate a wooden leg
Read more
Report abuse

J. Walker
4.0 out of 5 stars Love Bernice and her sense of adventure!
Reviewed in the United States on 2 August 2020
Verified Purchase
This is a delightful chapter book for older elementary and middle schoolers. Bernice is a quirky, red-headed wanna be writer and police detective. She lives in a small town located on a coastal shore complete with boat piers and lots of ships. The local police are used to her “help”. She and her best friend are obsessed (as all young girls are), with the local movie star, Crystal Bell. The two of them know all things “Crystal”. Bernice has even formed a relationship with Bell’s bodyguard/chauffeur who has caught her sneaking around the Bell mansion.

Bernice finds herself having to go it alone when her bestie comes down with Chickenpox. Continuing on in her adventures of sleuthing, she makes notes of all she sees and hears, even the flashes of light coming from a nearby uninhabited island. While studying these flashes and trying to get closer to them she meets a peg-leg sea captain whose boat is docked at the pier. Now Bernice is the type of person that gives 100% so she decides to see what it is like to be peg-legged and ties her leg back and learns to walk on a plunger. When one has this kind of dedication very little will stop the person from success.

Harth has written a fun adventure story that will tickle the funny bones, provide a little tension, and some good old fashioned scares. Her characters will become like friends to the readers and you won’t want to wait for another adventure. This is a more modern tale along the lines of Pippy Longstocking.
Read more
One person found this helpful
Report abuse

Bibliophile without Borders
5.0 out of 5 stars an engaging young sleuth solves a mystery!
Reviewed in the United States on 2 August 2020
Verified Purchase
One of the advantages of having a twitter 'author account' is the variety of books that comes one's way for review. This is one of the first children's/tween books by a fellow author I have had the honor to read and review, and I must say that the book was a real delight from first page to the last, and perfect for its intended audience. As a grandmother with three young grandkids, and another on the way, I'm glad to know that there are still fun, age-appropriate mystery books out there on the order of "Encyclopedia Brown"!

The delightful Bernice seems to tumble from adventure to adventure and is already a well-known local fixture as a child who loves to solve mysteries, most of them with varied and amusing results. But it's when a real crime happens that our intrepid young heroine is determined to solve, that things get interesting -- and dangerous.

Young readers will smile at her mistakes, groan when most adults don't seem to take her seriously, and cheer for her when she makes her great discovery to solve the crime. A few tense moments will make younger readers wonder what will happen next, but will be glad to know that Bernice will save the day.

"Bernice Takes a Plunge" is the first book in a series and one hopes that it won't be long before there will be the sequel and more adventures in store for Bernice and her friends both young and adult!
Read more
One person found this helpful
Report abuse

kevin
5.0 out of 5 stars Bernice's Persistence Pays Off
Reviewed in the United States on 17 November 2020
Verified Purchase
Bernice Peppercorn is a young girl with a wildly vivid imagination. Being an aspiring writer, she carries her note book with her everywhere she goes. She tends to not only see potential crimes, but ad libs and invents possible scenarios that seem to annoy the local constable. Although Bernice has stumbled and made mistakes in her reporting endeavors, it is a goodness at heart and the will to do the right thing that drives her. When a real crime is committed in her neighborhood and the police ask for the communities help, Bernice is more than willing to help out. However, based on her history of good intentioned reporting, her believability is called into question. Bernice remains vigilant and her unstoppable persistence finally pays off. I received a copy of this story in return for an honest review. Ann Harth has created a character that through her youth, with her unbound less imagination , you can't help falling in love with. Excellent story that is definitely worth your time.
Read more
Report abuse
See all reviews
Get FREE delivery with Amazon Prime
Prime members enjoy FREE Delivery and exclusive access to movies, TV shows, music, Kindle e-books, Twitch Prime, and more.
> Get Started
Back to top
Get to Know Us
Make Money with Us
Let Us Help You
And don't forget:
© 1996-2020, Amazon.com, Inc. or its affiliates