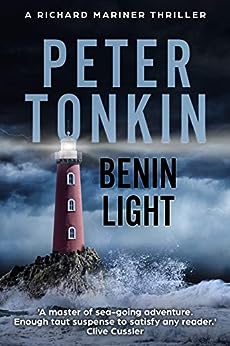 by Peter Tonkin (Author) Format: Kindle Edition
See all formats and editions
Sorry, there was a problem loading this page. Try again.

The light shines through the darkness.

Richard Mariner, marine adventurer, approaches the west coast of Africa, on board the supertanker, Prometheus V.

After an unfriendly exchange with the harbour master Mariner arranges for a helicopter to pick him up.

But his helicopter is soon struck by bullets and, upon landing, armed guards arrive at his hotel to arrest him.

And that's just the start of his problems.

Granville Harbour is a place plagued by poverty and corruption. Revolution is in the air. Violence seems to be the only currency.

Mariner must fight back, or risk losing everything..

“The Ides is a testosterone-fuelled battle roar in a world of double-dealing and betrayal, where wits must be sharp and recovery time between violent encounters is brief. Peter Tonkin has infused a familiar narrative with excitement, energy and a delicious twist right at the very end.” Mystery People

Peter Tonkin was born in 1950 in Ulster, Northern Ireland and was raised in the UK, Holland, Germany, and the Persian Gulf. The son of an RAF officer, Tonkin spent much of his youth travelling the world from one posting to another.

"Wildly romantic, populated with beautiful women and daring men, and packed with page after page of bold exploits, Tonkin's latest will appeal to armchair adventurers everywhere" Booklist on High Wind in Java "Tonkin is a superb storyteller who creates big, brash, swashbuckling adventures with taut suspense, fast-paced action, and tough, resourceful characters. A fine series that will appeal to both male and female action fans." Booklist starred review on The Ship Breakers "High-octane action; strong male characters and a tough, smart, attractive, woman; pulse-pounding suspense; and disaster after unimaginable disaster" Booklist on Cape Farewell "This Richard Mariner series will give Sunday sailors, thriller fans, and adventure lovers a shot of pure reading pleasure" Booklist on Resolution Burning" --This text refers to an out of print or unavailable edition of this title.

Tonkin is Head of English at the Wildernesse School, Sevenoaks. --This text refers to an out of print or unavailable edition of this title.

Me
5.0 out of 5 stars Love
Reviewed in the United Kingdom on 2 June 2019
Verified Purchase
Love his books
Read more
Report abuse