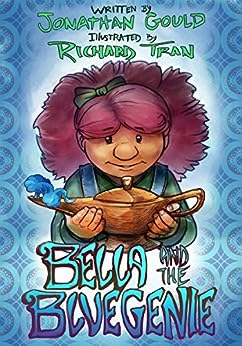 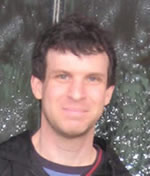 Bella and the Blue Genie: A Picture Book for Kids Kindle Edition

Could there be a genie in that magic lamp?

Bella is so excited when she discovers an old lamp, because it looks just like the lamps in those stories she loves. What will happen if she rubs it? Will a genie appear and offer her three wishes, just like in those stories?

She rubs it and... presto! A real-life genie! But the genie looks so... blue--in more ways than one.

Bella does everything she can to cheer Genie up, and along the way she discovers an important lesson: there’s more than one way to make wishes come true.

Jonathan Gould tells a warm and funny story about friendship and responsibility, with fun illustrations from Richard Tran that bring the colourful world of a child to life.

AUTHOR: Hailing from Melbourne, Australia, I spent my youth overindulging in Mad Magazine, Monty Python, and The Hitchhiker's Guide to the Galaxy, which left me with a slightly skewed view of the world. As a result, I've written numerous comedy sketches for both live theatre and radio, as well as several attempts at the great Australian sitcom. However, it is in books that I believe I've found my true calling. There's nothing I enjoy more than creating stories for children, and for the child in all of us - stories that I hope will make people laugh and think, and add a smile to their day. In addition to my children's stories, I've also written several humorous novels and novellas, one of which was a semi-finalist in the 2011 Goodreads Choice Awards.

ILLUSTRATOR: I've adventured in foreign worlds my whole life, and I've even put some down on paper. I enjoy adding color to projects, making a place pop off the paper and inks. I'm interested in how visual design and illustration collides to create objects that define and live inside themselves. I've fallen in love with maps and decorative work, and it's easy to draw from my background as a concept artist for game studios to create exciting renderings. I spend much of my free time playing tabletop RPGs and spinning living narratives. In between games, I'm researching history and culture and creating game props and images for the games I run and play in.

Jonathan Gould has lived in Melbourne, Australia all his life, except when he hasn't. He has written comedy sketches for both the theatre and radio, as well as several published children's books for the educational market.

He likes to refer to his stories as dag-lit because they don't easily fit into recognisable genres (dag is Australian slang for a person who is unfashionable and doesn't follow the crowd - but in an amusing and fun way). You might think of them as comic fantasies, or modern fairytales for the young and the young-at-heart.

Over the years, his writing has been compared to Douglas Adams, Monty Python, A.A. Milne, Lewis Carroll, the Goons, Dr Seuss, Terry Pratchett, and even Enid Blyton (in a good way).