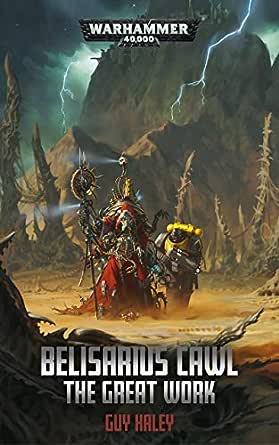 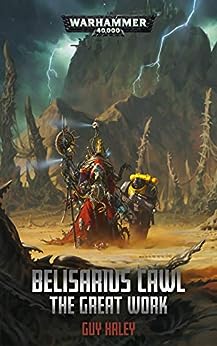 In the wake of the Great Rift, Belisarius Cawl turns his attention to the abandoned world of Sotha. Once home to the Scythes of the Emperor, it also hides a long-buried secret… and an ancient evil.

READ IT BECAUSE
Cawl is one of the most fascinating characters in the Dark Imperium, and Guy Haley gets right into his memory circuits as he seeks ancient secrets that will blow your mind.

THE STORY
Belisarius Cawl, Archmagos Dominus of the Adeptus Mechanicus is the most brilliant mind alive. For 10,000 years he has furthered the cause of mankind, working under the aegis of the Emperor and Lord Commander Roboute Guilliman to prevent the inexorable march of the alien and the traitor. Many call him heretic, but all must recognise the magnitude of his achievements, for who else but he was entrusted to create a new generation of Space Marines? Who else but the great Belisarius Cawl could even accomplish such a task?

Now, in the wake of the Great Rift and the Indomitus Crusade, his ambitions bring him to the long-dead world of Sotha, once home to the Scythes of the Emperor, now a barren wasteland devoured by the vile Tyranids. Accompanied by Tetrarch Felix and his elite warriors, it is here that Cawl believes the lynchpin of his mysterious Great Work lies. But uncovering it is a near impossible task, one in which the Archmagos must overcome an ancient evil that threatens to extinguish the last hope of humanity.

Guy Haley is the author of the Siege of Terra novel The Lost and the Damned, as well as the Horus Heresy novels Titandeath, Wolfsbane and Pharos, and the Primarchs novels Konrad Curze: The Night Haunter, Corax: Lord of Shadows and Perturabo: The Hammer of Olympia. He has also written many Warhammer 40,000 novels, including Belisarius Cawl: The Great Work, Dark Imperium, Dark Imperium: Plague War, The Devastation of Baal, Dante, Baneblade and Shadowsword. His enthusiasm for all things greenskin has also led him to pen the eponymous Warhammer novel Skarsnik, as well as the End Times novel The Rise of the Horned Rat. He has also written stories set in the Age of Sigmar, included in War Storm, Ghal Maraz and Call of Archaon. He lives in Yorkshire with his wife and son.
click to open popover

Jonathon Runge
3.0 out of 5 stars A decent read but I could have gotten the same value by reading a lore dump.
22 September 2019 - Published on Amazon.com
Verified Purchase
Interesting lore. It did not grip my attention much with it's characters and their interactions. I would recommend the Priests of Mars, Lords of Mars, and Gods of Mars instead for overall quality and lore implications.
Read more
3 people found this helpful

D. Milakovic
5.0 out of 5 stars Wonderfully written and a thrilling story
19 October 2019 - Published on Amazon.com
Verified Purchase
This book obviously handles Belisarius Cawl and this being the case there is a lot of cool machine stuff going on. Even better, we get a deep view into the past of several characters, and even get some more interactions with the emperor. Also the writing is just amazing so I would recommend to pretty much anyone.
Read more

James Dean Hendrickson
5.0 out of 5 stars One of my favorite characters in The 40K universe
8 December 2019 - Published on Amazon.com
Verified Purchase
I enjoyed this quite a bit I love Cawl constant jumping back and forth in the timeline was jarring but it seems to be I mean staple of a lot of 40K books whether it's jumping back and forth in the timeline or simply showing memories as a means of exposition
Read more

Amazon Customer
5.0 out of 5 stars A rare look at the Belisarius Cawl
6 October 2019 - Published on Amazon.com
Verified Purchase
Enjoyable, engaging, and providing a great look into Belisarius Cawl, one of the most important characters in Gathering Storm, but who we get very few novels about. Cawl is just as important as Guilliman to the possible salvation of the Imperium, but we know far less about him than we do the Space Marines. This book's characterization of Felix and his men also provides some interesting insights and makes him and the Primaris Marines in general deeper and more engaging characters.
Read more

Kindle Customer
5.0 out of 5 stars Great story about Belisarius Cawl uncovering Necron Technology
21 December 2019 - Published on Amazon.com
Verified Purchase
Five stars! This story is packed full of lore! Cawl is one of my favourite characters in 40k, in this book he and the space marines battle Tyranids, Necrons and more! You will also find out what secrets Pharos is hiding. Great fun to read!
Read more
Go to Amazon.com to see all 12 reviews 4.7 out of 5 stars
Get FREE delivery with Amazon Prime
Prime members enjoy FREE Delivery and exclusive access to movies, TV shows, music, Kindle e-books, Twitch Prime, and more.
> Get Started
Back to top
Get to Know Us
Make Money with Us
Let Us Help You
And don't forget:
© 1996-2020, Amazon.com, Inc. or its affiliates