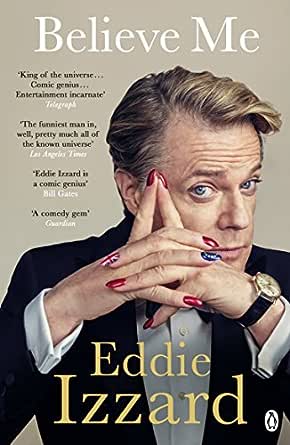 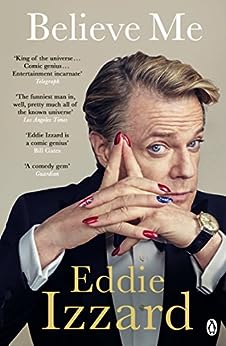 Believe Me: A Memoir of Love, Death and Jazz Chickens Kindle Edition

Izzard is Wikipedia in heels. He's made his career out of hilarious, dizzying, surreal routines held up by their own daft logic . . . A force of nature (Radio Times)

Sheer Comic Genius. His humour reflects the scattershot lunacy of Monty Python, but with a sophisticated silliness that is entirely his own. He is the most brilliant stand-up comedian of his generation (New York Times)

Izzard has a knack for reducing centuries' worth of history to just a few exquisite words (the Romans were just 'fascist plumbers', for example) (Time Out)

The funniest man in, well, pretty much all of the known universe (Los Angeles Times)

Izzard is fleet of foot - even in Cuban heels (Independent)

Had the Pythons stuck it out, they'd certainly be doing Izzard-like gags (Chicago Tribune) --This text refers to the hardcover edition.

'I know why I'm doing all this,' I said. 'Everything I do in life is trying to get her back. I think if I do enough things . . . that maybe she'll come back.'

When Eddie Izzard was six, he and his brother Mark lost their mother. That day, he lost his childhood too. Despite or perhaps because of this, he has always felt he needed to take on things that some people would consider the impossible.

In Believe Me, Eddie takes us on a journey which begins in Yemen (before the revolution), to Northern Ireland (before The Troubles), then to England and Wales and across the seas to Europe and America. In a story jam-packed with incident he tells of teddy bear shows on boarding school beds, renouncing accountancy for swordfighting on the streets of London and making those first tentative steps towards becoming an Action Transvestite, touring France in French and playing the Hollywood Bowl.

Above all, this is a tale about someone who has always done everything his own way (which often didn't work at first) and, sometimes almost by accident but always with grit and determination, achieving what he set out to do.

Brimming with the surreal humour and disarming candor of his shows (with occasional digressions), Believe Me tells the story of a little boy who lost his mother yet who has risen to become a star of comedy and drama, a leading advocate of total clothing rights, a British European and extreme runner of marathons, who bestrides the world stage as a world stage bestrider.

Eddie Izzard is a world-renowned comedian, actor, writer, runner, and activist. He made his West End debut in 1993 in a one-man show called Live at the Ambassadors, for which he received an Olivier Award nomination for Outstanding Achievement. He recently appeared on television as Dr Abel Gideon in Hannibal, and he produced and starred in the FX Networks series The Riches. His films include Valkyrie; Ocean's Thirteen and Ocean's Twelve; Across the Universe; Mystery Men; Shadow of the Vampire; The Cat's Meow; Lost Christmas; Castles in the Sky; and Whisky Galore! His stage appearances include David Mamet's Race and The Cryptogram; the title role in Marlowe's Edward II; 900 Oneonta; and A Day in the Death of Joe Egg in London and on Broadway, which garnered him a Tony nomination for Best Actor. Izzard's hit one-man shows include Dress to Kill, Stripped, and Force Majeure. His performance in Dress to Kill earned him two Emmy Awards. In 2010, the documentary Believe: The Eddie Izzard Story received an Emmy nomination. In 2009, Izzard ran forty-three marathons in fifty-one days throughout the United Kingdom, and in 2016, he ran twenty-seven marathons in twenty-seven days across South Africa in honour of Nelson Mandela's twenty-seven years in prison. By running these seventy marathons he has helped raise £4.8 million ($6 million) for the UK charity Sport Relief. --This text refers to the hardcover edition.

'I had never heard of Eddie Izzard before, but judging by this delightful memoir, he has a glittering career ahead of him' John Cleese

4.5 out of 5 stars
4.5 out of 5
432 global ratings
How are ratings calculated?
To calculate the overall star rating and percentage breakdown by star, we don’t use a simple average. Instead, our system considers things like how recent a review is and if the reviewer bought the item on Amazon. It also analyses reviews to verify trustworthiness.

papapownall
5.0 out of 5 stars Welcome to the surreal world of Eddie Izzard
Reviewed in the United Kingdom on 29 February 2020
Verified Purchase
I have always liked Eddie Izzard; ever since the 1960s which is as far back as I can remember. They say if you can remember the 1960s you were not there. Well I was, and I can. Even though I was only four at the turn of the decade when the 1970s started, I can still remember them. Well some of them anyway. I didn't know who Eddie Izzard was back then but I am pretty sure that if I had known him I would have liked him a lot. I like the way he communicates with people and his openness and his strange stories. He makes you think and he makes you laugh. This is the book he has written about his life and I do believe, perhaps wrongly, that he has written this himself rather than had a chat with a ghost writer who has written it for him. He also wants to make sure that everyone is picking up what he is laying down and there are plenty of amusing notes (in very small print) at the bottom of the pages to explain, for example, to readers from America, what some of the terms mean that he uses that will not immediately make sense to them. This is the sort of man he is.
Oh and he runs marathons too. Lots of them.
Read more
5 people found this helpful
Report abuse

Kenneth G.
5.0 out of 5 stars Five Stars
Reviewed in the United Kingdom on 27 June 2017
Verified Purchase
Buy it - a wonderful read by a lovely human being.
Read more
10 people found this helpful
Report abuse

Red queen
5.0 out of 5 stars A must read for Eddie fans
Reviewed in the United Kingdom on 31 March 2018
Verified Purchase
I'm a big fan of Eddie Izzard and have had the pleasure of meeting him. This book was just like Eddie talking, going off at a tangent as he frequently does, funny as he always is but I found it very touching too. He obviously misses his Mum hugely and is is also close to his father and brother which comes across in his writing. I found his writing honest and brave and it really lets you see a lot more of the person he is. If you're a fan too then you definitely need to read this.
Read more
One person found this helpful
Report abuse

CJW
5.0 out of 5 stars Great to know Eddie Izzard
Reviewed in the United Kingdom on 28 December 2019
Verified Purchase
It's great to learn a bit more about such a great comedian. When they are at the top of their game - which Eddie seems to have been forever - you can forget the difficult path to get there. As a runner I was almost more keen to understand his motivation to run so many back-to-back marathons. He's a tenacious comedian and runner. Oh, and the story telling is fantastic as you just apply a mental soundtrack of his lilting tones and it comes to life.
Read more
Report abuse

Amazon Customer
5.0 out of 5 stars Nearly finished the book-a good read. Parts
Reviewed in the United Kingdom on 3 July 2017
Verified Purchase
Nearly finished the book-a good read.
Parts, particularly the first half, are written to some extent as he communicates on stage-which is fun.
Read more
5 people found this helpful
Report abuse
See all reviews
Get FREE delivery with Amazon Prime
Prime members enjoy FREE Delivery and exclusive access to movies, TV shows, music, Kindle e-books, Twitch Prime, and more.
> Get Started
Back to top
Get to Know Us
Make Money with Us
Let Us Help You
And don't forget:
© 1996-2020, Amazon.com, Inc. or its affiliates