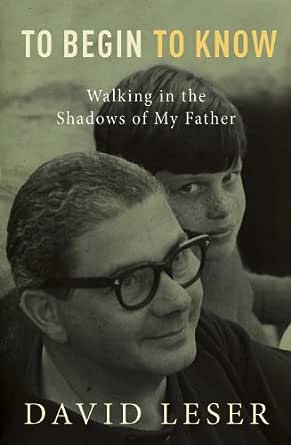 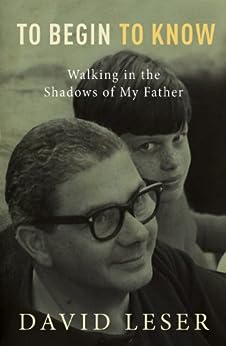 To Begin To Know: Walking in the shadows of my father Kindle Edition

David Leser has been a Middle East and Washington D. C. correspondent as well as feature writer in Australia for the Murdoch, Packer and Fairfax presses. He's more recently gained a reputation as a brilliant profile writer; among his subjects are Alan Jones, Dame Edna Everage, Helen Garner, Margaret Whitlam, Oriana Fallaci, the Dalai Lama and Xena, Warrior Princess. The recipient of a number of awards, David has worked as a staff feature writer for the Daily Telegraph, The Australian, HQ, The Bulletin, The Sydney Morning Herald, Good Weekend and the Australian Women's Weekly. --This text refers to the paperback edition.

Kim Wingerei
5.0 out of 5 stars An honestly and extremely well told story of an exceptional journalist and a good man.
Reviewed in Australia on 23 October 2017
Verified Purchase
From the self serving grandiosity of Conrad Black to the raise and mysterious demise of Robert Maxwell, I have always enjoyed reading about people in the media. David Leser is neither self serving, nor mysterious, and he has written an at times brutally honest account of his life as a journalist, being a son, and being a husband and a father. Told with much wit and insight, his story cleverly uses world events and the many fascinating people he has met along the way as a backdrop to his own journey. Having spent much time in Jerusalem, a proud, but somewhat agnostic Jew, he agonises over the conundrum that is the Israel oppression of the Palestinian people. He serves up fascinating tidbits of the very long list of people he has interviewed and written about, not shying away from having opinions about those that may not share his own values, yet without malice or the hubris prevalent in the media world he inhabits. His meetings with Allan Jones are told with humour and due reverence to the enigmatic, self important and influential radio host. (That Jones sued Leser for the article he wrote about him speaks volumes about the narcissistic paranoia of Jones, but that is another story, and not one Leser himself dwells on to his credit.)

David is equally candid about his own demons, not least in the way he describes the at times fractious, but fundamentally loving, relationship with his mercurial father, the long-serving CEO of Conde Nast, one of the world’s largest media companies. He weaves the story of his family, fortunate survivors of the Holocaust, into that of his own at times painful pilgrimage of self-discovery. In summary, this is not so much an autobiography but a ripping yarn about a passionate, deeply caring, word- and world-wise man, worts and all. Do your self a favour and read it!
Read more
Helpful
Report abuse

Anna Denejkina
5.0 out of 5 stars A candid account of a life
Reviewed in Australia on 2 February 2016
To Begin to Know is in a class of those great, wonderful books which you can fly through in a night, or two; those great books which you don’t want to finish but cannot put down. If there was a book equivalent to the Danish hygge, To Begin to Know is one of those books, despite some of the sadness that swims below some of the stories.

It is brilliantly written, and flows like a conversation with the author - it sucks you into its pages and narrative without making you feel like a voyeur, making you connect with at least one of the themes, or the anecdotes, or stories within the book.

David has written some of the most beautiful, engaging, in-depth profiles on others – somehow, no matter who it is, it seems, he can make you dig deep inside to say and to open so much. Therefore, seeing his keen eye turn on himself absolutely had to be a fascinating, frank piece of writing about the life of a writer of others. And indeed it is, and it is a beautifully candid account of his life, his relationship with his Father, with his two daughters, and his relationship with himself - which turns to be the most captivating of all.
Read more
Helpful
Report abuse

W.H. Chong
5.0 out of 5 stars Brave and inspiring
Reviewed in Australia on 29 January 2016
I read this book while on holidays. Leser's journalism is admirable and this memoir is new territory — startling, discomfiting and eye-opening: brutally self-confessional. Certainly the relations between an middle-aged child and an already aged parent becomes ever more resonant. But there are many episodes: imagine the author curled up in foetal position, later on, surfing. Then driving his car with his partner into contested ground in the Middle East and barely escaping with their lives. O, M, Gee. 'To Begin to Know' is highly entertaining in its very particular way — I read it inside of two days — and terrifically affecting. I can see on the book cover a line like this: "A brave and inspiring story" and it would be truth in advertising.
Read more
Helpful
Report abuse

KS
5.0 out of 5 stars I loved it!
Reviewed in Australia on 29 January 2016
I loved it! There were places I burst out laughing and then other places that choked me up. I'm not sure I've ever read such a frank self portrait or one so threaded with insight. The portrait of your dad is so clear and loving and forgiving. And a surprise to find my mum in your pages, you know that your friendship gave her so much, that her last years in Australia were rich in experiences and friendships and yours was an important one.
Bravos and thanks for a wonderful read.
Read more
Helpful
Report abuse

ID Shark
5.0 out of 5 stars Outstanding!!!
Reviewed in Australia on 16 February 2016
Few people write with their eyes and ears truly open and their heart fully exposed.
David is such a writer.
This is a beautifully written and deeply sensitive book.
It morphs seamlessly from a tale about his father into his own revelatory journey.
Thank you David Leser for having the courage to share your story with us, and to expose so much about your own father, and in doing so, your own good self!
Bold, brave writing at its best!
Read more
Helpful
Report abuse

Should be on Oprah's list!
Read more
Helpful
Report abuse

richard p glover
5.0 out of 5 stars fascinating and honest
Reviewed in Australia on 29 January 2016
What a great read this is, constantly fascinating and honest and full of insight. My only criticism: I wanted the tantric sex scene to be a lot longer...I particularly liked the raw ragged edges of all the stuff in Paris, and the author's honesty about marriage and fathering.
Read more
Helpful
Report abuse
See all reviews

Jonathan Gilad
5.0 out of 5 stars David, thank you for enriching me by sharing your life story
Reviewed in the United States on 12 September 2015
Verified Purchase
A beautifully written and rich life story, written with feeling and authenticity.
David, thank you for sharing your story in such a powerful and human way.
It reminds us all that as much as we are different we are the same
The humanity of your story strengthens me on my journey.
Till our paths cross again.
Read more
Report abuse

tricia ann fairlie
4.0 out of 5 stars Wealth brings opportunity but happiness?
Reviewed in the United States on 11 September 2014
Verified Purchase
Excellent read and brave to reveal so much depth of his life
Read more
Report abuse
See all reviews
Back to top
Get to Know Us
Make Money with Us
Let Us Help You
And don't forget:
© 1996-2021, Amazon.com, Inc. or its affiliates