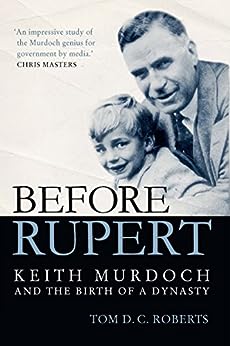 Before Rupert: Keith Murdoch and the Birth of a Dynasty Kindle Edition

Tom D. C. Roberts is a media historian and biographer with a passion for uncovering stories in forgotten and overlooked archives. His PhD studies at Macquarie University also instilled a fascination for the insights biography provides as a form, as well as the issues it raises as a practice. Before Rupert is Tom's first book and draws on four years of ground - breaking research undertaken around the world into the life and legacy of Sir Keith Murdoch. Tom currently lives in the UK. --This text refers to the paperback edition.

Wayne Robinson
4.0 out of 5 stars As is the father, so is the son. The myth of a hero.
Reviewed in the United States on 1 December 2015
Verified Purchase
If Keith Murdoch hadn't been the father of Rupert and he hadn't written the Gallipoli Letter, then no one would be interested in his life. And this biography wouldn't have been written.

The story of how Keith Murdoch came to visit Gallipoli in September 1915, after the disastrous August offensives which did little other than add numbers to the slaughtered for little gain, has been told many times before. And told much better. It's a myth that the letter he wrote to the Australian Prime Minister Andrew Fisher led to the withdrawal from Gallipoli. In his letter, Murdoch was recommending that Ian Hamilton should be replaced and that the campaign should be put on hold over the Winter and continued in 1916 with large reinforcements.

The Gallipoli campaign became untenable when Bulgaria joined the Central Powers and Serbia was defeated opening up a land route from Germany to the Ottoman Empire allowing modern battlefield artillery to be supplied, which were reaching Gallipoli around the time Anzac and Suvla Bay were abandoned.

As the author notes, Keith Murdoch's conduct in the remainder of the war was deplorable. He was extremely partisan in campaigning for the Australian conscription plebiscites to be passed. He campaigned in favour of the Billy Hughes government in its reelection campaign. He tried very hard to get John Monash, the most competent Australian general of the Great War, passed over as commander of the AIF in 1918 in favour of Brudenall White.

It's a somewhat unusual biography. The story really only starts in 1909, and only really starts to get into its stride in the account of the 1920s when he'd become the editor of the Melbourne Herald newspaper. He had learned the lessons from his British mentor Lord Northcliffe in how to run a newspaper (as a result he was nicknamed Lord Southcliffe), including giving emphasis in reporting to crime, with a new story everyday. On the last day of 1921, a 12 year old girl was found raped and murdered in Gun Alley. The Herald waged a vicious campaign to track down the murderer, offering to match the government's 250 pound reward for information concerning the murderer, insisting that it was inadequate, causing the government to increase it to one thousand pounds, an enormous sum at the time.

Eventually a man was arrested for the murder, an innocent man as it turned out, and he was found guilty after extremely prejudicial reporting by the Herald, including listing the names and addresses of the jury, who'd be under extreme pressure to return a guilty judgement after the Herald had convicted the accused in the court of public opinion. He was condemned and executed in April 1922 and eventually cleared in 2008 (that must have made him feel better).

The last two chapters deal entirely with Rupert and his sons, and throughout the biography there are accounts of Rupert's and James' problems with the British hacking scandals, drawing comparisons with Keith Murdoch's actions (as the father, so is the son - and grandsons too). Keith Murdoch continually attempted, often successfully, to choose governments. Rupert just continued the habit, on a larger scale.

I can't say that I've come out with a particularly positive view of Keith Murdoch from reading this biography. He was a terrible racist. And I was surprised that he was an unrepentant supporter of eugenics even after the horrors of Nazi Germany. I can't see that he had many good qualities.
Read more
3 people found this helpful
Report abuse
See all reviews
Back to top
Get to Know Us
Make Money with Us
Let Us Help You
And don't forget:
© 1996-2021, Amazon.com, Inc. or its affiliates