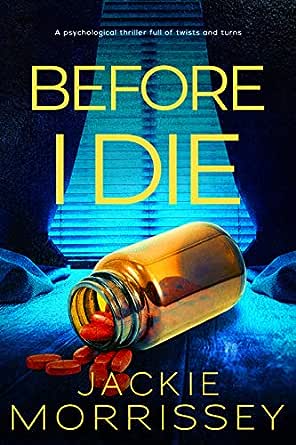 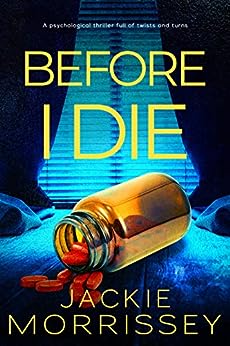 Before I Die: A psychological thriller full of twists and turns Kindle Edition

Marnie Harrison
TOP 50 REVIEWER
4.0 out of 5 stars A solid read
Reviewed in Australia on 21 June 2020
Before I Die is a thrilling read, but is one that in no way makes me look forward to my twilight years. In fact this story down right terrified me! Jackie has crafted a plot straight out of one of my nightmares. It opens with a harrowing prologue of the worst kind and which sets the chilling tone for the rest of the story. It is one that opens your mind and makes you want to stand up and protect your elderly loved ones even more and to make sure you listen to what they say.

The story follows Maureen who is proudly and fiercely independent. But when she has a fall and hurts her ankle, her daughter Alva enlists the help of caregiver Dolores, convinced that her mother can no longer look after herself. This causes much angst between the two women, which is not helped by Dolores’ getting in Alva’s ear trying to convince her that Maureen is becoming senile. But Maureen becomes afraid when her friend Frank dies unexpectedly whilst in Dolores’ care and is convinced that Dolores murdered Frank and that she could be next.

The characters in the story are well developed and although I can’t say I liked them all, they all play out the roles they have been given perfectly. I really enjoyed Maureen the most and Michael who is Frank’s drug addicted son. Although at the height of his drug use he was utterly despicable to Frank, he really bands together with Maureen and steps up as they form an unlikely friendship with one goal and that is seeking out to expose Dolores and her crimes.

As for Alva, I actually loathed her and the way she treats Maureen. She classes her mother as a nuisance and barely can bring herself to listen to her concerns and continually fobs her off. On more than one occasion I wanted to reach into my Kindle and give her what for. I just felt anger towards her every time she came up in the story. And then there was Dolores, or the devil as I like to refer to her as. She is in a league all to her self and is one psycho that has more than one screw loose! As much as I disked her, I have to say that she really has been written as the perfect villain.

Jackie has a very easy style and has done a really good job with this book. She cleverly builds up the tension and suspense throughout and on a number of occasions had my heart racing. She was able to keep me engaged which is a must and although the subject matter at times was hard to take in, it has a satisfying conclusion. Before I Die is a good solid read and I look forward to more books to come from Jackie. It was a pleasure to read and review Before I Die which I recommend.

Thank you to NetGalley, Inkubator Books and Jackie Morrissey for allowing me to read an advanced copy of Before I Die, which I have reviewed honestly and voluntarily.

Pat
4.0 out of 5 stars Frighteningly realistic
Reviewed in Australia on 25 June 2020
Although this book started a. Little slow, it soon sped up and I ended up really enjoying it. For one thing it was a nice change to read a story featuring older people. Let’s face it, they don’t get much attention from fiction writers. And for another, as a slightly older person myself, it was frighteningly realistic. I could see this really happening. And I have read enough reports of elder abuse to know it is real.

When her 80 year old friend, Frank, dies Maureen comes under the sway of his former career, Dolores. Maureen doesn’t like Dolores as she is a very pushy and bossy woman who barges her way into people’s lives and takes over. Maureen has also been speaking with Frank’s son, Michael. Although Michael is a heroin addict he is not a bad person and he has convinced Maureen that Dolores is not to be trusted. However, Maureen’s daughter, Alva, dismisses her concerns and tells her how ungrateful she is - Dolores only wants to help! Alva believes Dolores when she says Maureen is starting to get confused and frail. As Maureen doesn’t like confrontation she goes along with having Dolores as her career for a while as she tries to work out how to get rid of her. But soon Maureen is struggling to marshall her thoughts and is always so tired. Is she really going downhill as everyone thinks? As. time goes by though it becomes clear that Dolores may really have a nefarious agenda. How can one little old lady, whom everyone thinks is losing her marbles, fight back?

I thought this was very well done and quite heartwarming while still having a sense of approaching menace as the book progressed. The characters were really relatable and the suspense really ratcheted up towards the end.
Read more
Helpful
Comment Report abuse
See all reviews from Australia
Get FREE delivery with Amazon Prime
Prime members enjoy FREE Delivery and exclusive access to movies, TV shows, music, Kindle e-books, Twitch Prime, and more.
> Get Started
Back to top
Get to Know Us
Make Money with Us
Let Us Help You
And don't forget:
© 1996-2020, Amazon.com, Inc. or its affiliates