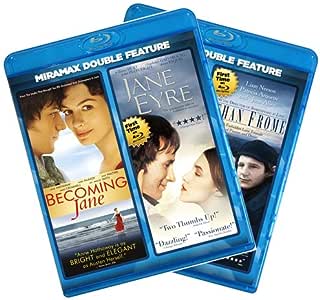 Region 1 encoding. (Most single-region DVD players sold in Australia play only Region 4 DVDs or Region B/2 Blu-Ray discs. Items like this one may require a region-specific or multi-region DVD player and compatible TV. More about DVD formats)

BECOMING JANE
When the dashing Tom Lefroy (James McAvoy), a reckless and penniless lawyer-to-be, enters Jane's (Anne Hathaway) life, he offends the emerging writer's sense and sensibility. Soon their clashing egos set off sparks that ignite a passionate romance and fuel Jane's dream of doing the unthinkable—marrying for love.

CHARLOTTE BRONTE'S JANE EYRE
Jane Eyre (Charlotte Gainsbourg) is a young woman whose will to overcome a life of hardship leads her into a passionate romance with a handsome, yet mysterious, gentleman (William Hurt). Swept up in the possibility of a happy new life, Jane is shattered when terrible, untold secrets from his past are revealed...threatening to tear her and her lover apart forever.

DECEPTION
Nothing can stop Bessie Faro (Andie MacDowell) from putting together the puzzle of her husband Johnny's (Viggo Mortensen) unexpected death—and secret life. While taking care of his arrangements, Bessie meets a seemingly trustworthy stranger (Liam Neeson) and learns that Johnny has stashed a small fortune in bank accounts across the world. As she sets out to hunt down the money, Bessie soon discovers that the only thing more treacherous than lies…can be finding out the truth.

ETHAN FROME
Hailed by critics nationwide, Ethan Frome is the classic Edith Wharton tale of blazing passion and forbidden desire. Liam Neeson stars as Ethan Frome, a man torn between his joyless marriage to one woman and his lustful desire for another (Patricia Arquette). His actions soon lead to a forbidden triangle between one love that is, and one that will never be.