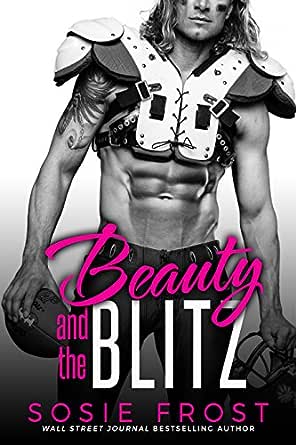 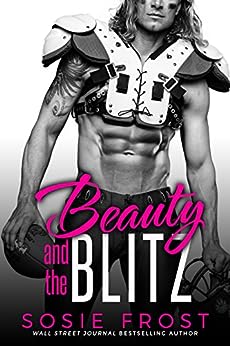 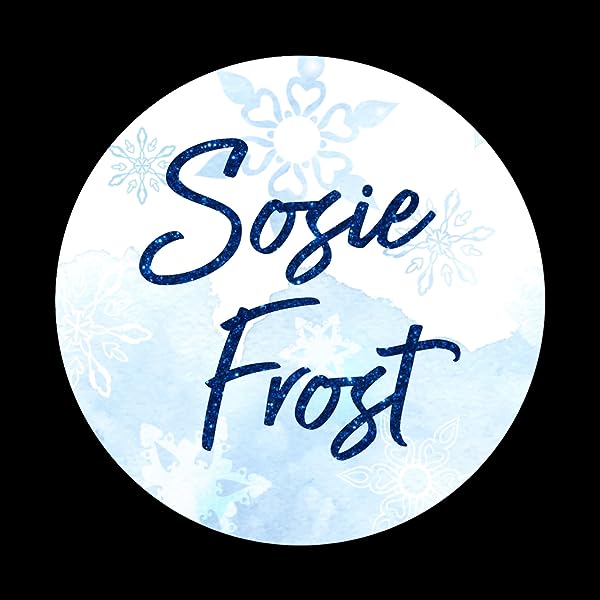 Beauty and the Blitz: A Sports Romance (Touchdowns and Tiaras Book 1) Kindle Edition

4.3 out of 5 stars
4.3 out of 5
264 global ratings
How are ratings calculated?
To calculate the overall star rating and percentage breakdown by star, we don’t use a simple average. Instead, our system considers things like how recent a review is and if the reviewer bought the item on Amazon. It also analyses reviews to verify trustworthiness.

Linda Vermuyten
TOP 500 REVIEWER
4.0 out of 5 stars A different take on Beauty and the Beast
Reviewed in Australia on 21 April 2019
Verified Purchase
Beauty and the Blitz was a testosterone filled sports romance that was fast paced and easy to read. Told from dual POV of Piper and Cole who fight their instant chemistry when they are thrown together as agent and player.

Their banter and witty comments frequently brought a smile to my face, as well as their internal dialogue.

The Beast is certainly all beast which made the moments spent with Piper's young daughter Rose all the more sweeter. We were able to see the cracks in Cole's tough exterior.

In my opinion Piper's father behaviour was inexcusable and I was disappointed in their relationship. This perhaps struck a nerve for me because I have lived the life of a single mum, but I did have the family support. There was also no old world, chauvinistic expectation that women are to get married, have babies and be a good little wife put upon me. This belief and expectation of Piper had me nashing my feminist teeth.

Overall I enjoyed the story. I enjoy a sports romance even though I have absolutely no understanding of the game of Gridiron at all and the technical speak all went over my head. I would have like to delve a little bit deeper into the complex character that Cole was but I felt his connection to Piper and Rose all the same.
Read more
One person found this helpful
Helpful
Comment Report abuse

Gii
TOP 1000 REVIEWER
4.0 out of 5 stars Fantastic read!
Reviewed in Australia on 25 May 2016
Verified Purchase
I loved Cole and Paige. They had an awesome dynamic. I loved how Paige didn't give up on Cole. Sh put up with his eccentricities and hang ups.
I laughed so hard when Paige babyproofed Coles home after moving in to protect her daughter Rose. It was hysterical! This big, huge 6'6 guy that can't open the fridge or cupboard doors...Oh and forgetting about the baby gates!
This was enjoyable and I cannot wait for the next one!
Read more
Helpful
Comment Report abuse

Patty
3.0 out of 5 stars Good quick read
Reviewed in Australia on 5 July 2016
Verified Purchase
Everyone needs a little help now and then. Loved the heros soft side with the baby!! Sexy time was good also
Read more
Helpful
Comment Report abuse

Lover❤️All Books📚 Romance
5.0 out of 5 stars BOOK BARGAIN 3 STORIES INCLUDED
Reviewed in Australia on 12 June 2016
Verified Purchase
What a great read, really enjoyed all 3 stories included in this purchase. Will look out for the next sport instalment from this series and this Author
Read more
Helpful
Comment Report abuse

EmmaOBrien
5.0 out of 5 stars Couldn’t put it down
Reviewed in Australia on 30 July 2018
Verified Purchase
I couldn’t stop reading! Absolutely love this story. Made me feel so many emotions.
Read more
Helpful
Comment Report abuse

Liash
TOP 50 REVIEWER
4.0 out of 5 stars Enjoyable read
Reviewed in Australia on 12 February 2018
Read this as a bonus novel in another of Sosie's books and had to leave a review for it - I enjoyed it that much! This is probably one of my favourite Sosie books thus far (and I do admit I'm still new to her books and writing). Cole and Piper couldn't be more different, but somehow that works. Piper doesn't give up on him, even when he gives up on himself. Rosie is just adorable and the perfect way to melt Cole's heart as well. There are funny one-liners, lots of baby-related hilarity, and some D&M with a guy who considers himself broken, beyond fixing and not worth anyone's time. I loved how it played out, and how Piper was able to come to an arrangement/balance with her father in the end as well (he was horrible to her, but did eventually realise that and apologise so keep reading!). The ending was sweet and I'm glad that it all worked out for Cole in regards to his career decisions, but I would have liked a little more reveal from Cole as to why he was so angry - that was never really discussed aside from a passing comment about his father when he was a child. Surely there is more to it than that! I loved Piper's interaction with the new draft Lachlan and will be looking to read his book as well.
Read more
One person found this helpful
Helpful
Comment Report abuse

Nicmr
5.0 out of 5 stars Loved it!
Reviewed in Australia on 15 May 2016
Loved it! Became obsessed with finishing it couldn't wait to see how the ending played out and it was well worth it. This story had everything
I need in my books a hunky athletic alpha male and a smart strong female with both points of view and in depth background to give you the big picture. If you liked the Wall of Winnipeg (I loved it) then this book is for you. This book was given to me as an ARC.
Read more
Helpful
Comment Report abuse
See all reviews

Hipperty Hop
5.0 out of 5 stars A delectable story
Reviewed in the United Kingdom on 21 January 2019
Verified Purchase
I have come to the conclusion that Sosie Frost is an incredible writer. How did I come to this conclusion I hear you say? Well I'll tell you. I'm British and I have no interest in American football. If you are going to have a game where you pick up the ball and run with it, then have the decency to give it a name that reflects it. I rather watch real football and I won't call it soccer to appease our American cousins. Sorry about the rant but I wanted you to understand how uninterested I am in this game.

Having read other books by this author, I thought I would give it a try despite my trepidation. And would you believe it, she pulled me in. Sosie's writing is so good that I didn't mind the sporting references.

This is a sweet story of a single mother trying to take care of her baby the best way she can under the disapproving glare of her father. Forced to gain the compliance of the American League's most dangerous player or lose her job, Piper inserts herself into Cole's life.

Cole has spent his life in emotional pain, only when he becomes the beast on the pitch can he find an outlet for his turmoil. But when he's told to transfer to another team or risk losing his career he digs his heels in and refuses to go.

But can Piper make him see the light? You will have to read the book to find out and it will be definitely worth it. Enjoy peeps 😉
Read more
One person found this helpful
Report abuse

Kindle Konvert
4.0 out of 5 stars 3.5 - 4 stars - fab dialogue & great overarching storyline
Reviewed in the United Kingdom on 2 January 2018
Verified Purchase
Piper Madison's life is not how she envisaged but she can't regret her beautiful little girl, Rose. Struggling to make ends meet, as well as putting up with her demanding father's attitude. She's sent off to deal with Cole Hawthorne AKA The Beast. He's the monster linebacker with a monster reputation to match. He's known for being tough on the field, taciturn, and extremely difficult to deal with.

Cole has struggled all his life to deal with his rage and, as time goes on, he's finding it harder to pigeon-hole his aggression. It's beginning to seep into his life off the field. When Piper and her daughter barge into his silent, ordered, but lonely existence, he's terrified of hurting them.

Piper sees beyond The Beast persona - she sees the caring, gentle man that lurks below the surface.

This was a tricky one to rate as I enjoyed the overarching storyline and I liked the characters, especially little Rose, who was so adorable. However, I thought all the references to fairytales and HEAs were a little overdone.

What really pulled this story back for me was that I absolutely LOVED the repartee between the characters. The author has a real talent for dialogue and I'm always a sucker for clever, sparkling banter between characters. For that alone, I will definitely be reading more from this author.
Read more
Report abuse

MoMo
5.0 out of 5 stars Wowzer!
Reviewed in the United Kingdom on 24 July 2019
Verified Purchase
I couldn't put this book down! I loved the tortured soul that Cole is. He is almost animalistic in his description. To combat that, you have a sassy woman who doesn't see what he sees and therein lies a brilliant story. The humour in the dialogue in this book is brilliant! I laughed, I chortled, I snickered! The relationship between Cole and her daughter adds another element to this story that melts your heart. I truly enjoyed this story and was gutted when it ended.
Read more
Report abuse

L beaver
3.0 out of 5 stars Easy reading
Reviewed in the United Kingdom on 22 December 2019
Verified Purchase
Piper has ended up as an agent for a footballer that won't listen. Cole doesn't need anyone, he's a loner constantly in trouble with his team. Piper tries to help but her baby girl must come first. Cole tries to stay away but he likes the feelings she and her baby invoke, he just needs to take it all in.
Read more
Report abuse

Hanbarn
4.0 out of 5 stars Good read
Reviewed in the United Kingdom on 22 September 2020
Verified Purchase
Surprisingly good read by an author I hadn’t read before. Good story and characters were larger than life. Loved the repartee between the lead characters and Rosie was a little doll. Workday have liked to see a bit of comeback on the ex and the team captain but heyho that’s just me. Good read.
Read more
Report abuse
See all reviews
Get FREE delivery with Amazon Prime
Prime members enjoy FREE Delivery and exclusive access to movies, TV shows, music, Kindle e-books, Twitch Prime, and more.
> Get Started
Back to top
Get to Know Us
Make Money with Us
Let Us Help You
And don't forget:
© 1996-2020, Amazon.com, Inc. or its affiliates