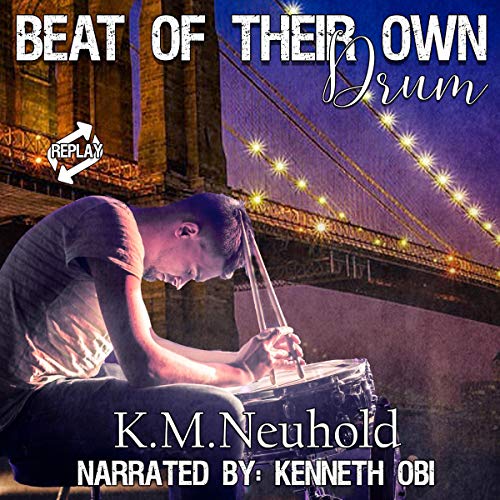 Beat of Their Own Drum: Replay, Book 3

Liash
TOP 50 REVIEWER
4.0 out of 5 stars Enjoyable read
Reviewed in Australia on 15 May 2019
Verified Purchase
I have thoroughly enjoyed this series and was looking forward to Jude's book after the hints dropped in the earlier 2 books. He was a desperately broken character on a fast downward spiral, and I wanted to know his background, and see him turn his life around as well.

The book starts off by showing the relationship history between Bennett and Archer - and the reason they ended up parting despite the love between them. It set the scene right up for what would become an MMM dynamic.

What I wasn't expecting was such a fast turn into BDSM - both D/s and Daddy kink came into this one. While I found those dynamics worked, and suited Bennet and Archer, what I lost any real grasp on Jude's personality - I only got to see him as the Brat. Even the chapters from his POV was about him pleasing his Dom or Daddy - therr was no real soul searching from him that we saw in both Lincoln and Lando's books. He just seemed to fall into it and go with the flow. Maybe that was meant to showcase his submissive tendencies, but I just felt I was missing getting to know Jude.

Faye K
TOP 500 REVIEWER
5.0 out of 5 stars Three guys that fit perfectly together.
Reviewed in Australia on 14 May 2019
Verified Purchase
🎧 💖🔥 A beautiful story narrated by Kenneth Obi.  Voiced with different vocals for each character was perfect.
The story is a gorgeous story of three men coming together to love.  Hot sexy scenes with a connection between them. Jude was crying out for love putting his life in danger again and again. Asher the band manager was a mass of worry about them all.  And Bennett is their new glue and knowing what to do. A few things happen in the story that keeps it progressing along and even contains a little twist.
Asher hires Bennett to help with Jude drug problem but also they where once lovers years ago.  Bennett is a Dom and uses his voice to help Jude, but Jude doesn't know why he reacts like he does..  A great story of them reaching out for their dreams and fitting together.  I love the series so far and can't wait to read the next book to see what happens next for the band.
Read more
Helpful
Report abuse

Ellie
5.0 out of 5 stars Wonderfully captivating and heartwarming, I loved this!
Reviewed in Australia on 15 November 2018
With each new book in this series I fall in love with the characters more and more. I think this book was my favourite so far with the three men dealing with their issues and coming together to form a relationship that worked for all of them.

Poor Jude, I loved the re-telling of the past where he felt like he was being rejected by Archer. The way he took his words literally and then set out to follow them like orders felt like something many 18 year olds could do. It was both heartbreaking yet slightly amusing at the same time. I loved Jude, he felt like someone that just needed to be seen and was determined to fall through the cracks he had created since he felt so invisible.

I really enjoyed the dynamics between the three characters. The Daddy dynamic was somewhat unexpected but it seemed to flow from the Dom relationship already in place between Bennett and Jude. Loved these three together.

Can't wait to read the next book in the series!
Read more
Helpful
Report abuse

TABellmond
5.0 out of 5 stars Another Replay winner
Reviewed in Australia on 11 November 2018
The Downward Spiral boys return in the third of the Replay series which gives us Jude's story. This is a lovely take on MMM, merging three very distinct characters into a functional relationship. I don't want to give away any spoilers but I have to say I love how the dynamics came together with these MCs. It's not a combination I've seen in MMM before and I wasn't entirely sure how it was going to work, but it is written beautifully and makes perfect sense given the back stories of each man. Expect some terrific story telling, hot intimate scenes and a bit of lovely kink here.
Read more
One person found this helpful
Helpful
Report abuse

Penny Ellen
TOP 500 REVIEWER
4.0 out of 5 stars Love This
Reviewed in Australia on 7 July 2019
Damn what a great story.
Full of angst, drama and lots of sexy times.
a Daddy, a Dom and a Boy make this MMM read freaking great and I wish there was more.
The story is written well and the characters are fantastic, there is BDSM and Daddy kink which all fits really well together and makes the story so much more.
I loved that Jude, Archer and Bennet don't instantly fall into a perfect relationship, I liked reading about them navigating the ins and outs of how it would work but that they all also talked things through and didn't force anything between the three of them until all were ready and accepting.

I am really interested in what happens to the other band members in their books.
Read more
Helpful
Report abuse

Melduk
5.0 out of 5 stars A must read
Reviewed in Australia on 15 November 2018
I could not put this book down. I read it from start to finish in one go. I have not read the other books in this series but this book was a story all on its own and I did not feel like I missed anything. The chemistry between these three was off the charts hot and an odd mix that somehow just worked. The story drew me in and would just not let go.
Read more
Helpful
Report abuse
See all reviews

madmoo 37
5.0 out of 5 stars A definite must read
Reviewed in the United Kingdom on 15 November 2018
Verified Purchase
Yet another 5*read from k m neuhold and a brilliant addition to the replay series this book follows jude on his journey to recovery from his drug addiction, with the help from archer and Bennett jude gets exactly what he needs in form of a dom and a daddy. This book might not be for everyone but I highly recommend you give it a shot you'll be surprised
Read more
Report abuse

Freckles
4.0 out of 5 stars Amazing!
Reviewed in the United Kingdom on 10 December 2018
Verified Purchase
Really enjoyed this. It was great reading Jude’s story and catching up with the others. I enjoyed how the stories overlapped with the previous books and I could see where each one happened in the other band members stories. I liked the combination of mild D/s and daddy with Bennet Archer and Jude.
Read more
Report abuse

Kirsty Mc
5.0 out of 5 stars Fantastic!
Reviewed in the United Kingdom on 11 November 2018
Verified Purchase
Since getting the hints of Jude’s story in the first two Replay books I’ve been excited to know what happens in Beat of Their Own Drum. K. M. Neuhold did not disappoint. I love the interactions between Jude, Archer and Bennett - they are the perfect fit all together and just what Jude needed to curb his self destructive ways.

A definite must read - and I can’t wait for more!
Read more
Report abuse

Morgans mum
5.0 out of 5 stars A brilliant read
Reviewed in the United Kingdom on 26 January 2019
Verified Purchase
I love this book and the wonderful MC's, looking out for more.
Read more
Report abuse

MBN
5.0 out of 5 stars Sometimes Three is the Magic Number
Reviewed in the United States on 11 November 2018
Verified Purchase
Despite the old song, "It Takes Two", there are times when three is the magic number as the author so deftly shows us in this story. For me, this story got off to a little bit of a slow start as a result of the flashback scenes employed to set the stage. By midway in the story, I couldn't put the book down and by the 3/4 mark, I was entrapped in one of the most erotic, intimate, compelling stories I've read in a long time. I was so engaged that I put the book down because I didn't want it to be over.

Archer and Bennet are two men whose love was perfect in some ways yet the relationship just didn't work because of their too-similar needs in the bedroom. Even though they didn't make it as a couple, there was never a lack of caring. Each went his separate way with feelings of regret and neither found anything that came close to the love they had for each other.

It is sixteen years before Archer and Bennett meet again.

I met the members of this band in earlier books of this series and enjoyed the earlier stories. I felt that the author set a beautiful table for this series, set in multiple locations as the band was operating from an NYC base and touring nearly constantly. The name Downward Spiral, unfortunately, describes the current state of this band and it's members as we join Josh, the drummer for his story. Although Jude is the major character of this story, other members of the band are secondary characters integral to the story, especially Lincoln.

The quick rise to success with unanticipated fame with constant touring has negatively affected each member of the group, individually and as a group, but none more than Jude. His relationship with family and his own self-talk is a catalyst for a self-perpetuating cycle of behavior followed by guilt, followed by more bad behavior. Because he's been told he's worthless, and his own father didn't care enough to hold him accountable, he believes that he is worthless. He increasingly lives up to his own self-image and the image that he believes others hold of him. His self-defeating behavior continuously reinforces his belief that he is worthless. We join Jude, his band manager/friend Archer at a point when the situation has come to a breaking point. Something needs to change. Archer has taken responsibility for everything to do with the band, both personal and professional he finally reaches the conclusion that he needs help. Despite personal misgivings, he calls former lover Bennett who is a highly regarded celebrity handler. For Bennett, life is about structure and rules, consequences, punishments and reward and above all control. At loose ends, Bennett is interested in the challenge but he has more than handling Jude on his mind.

I highly recommend this series, read in order. Although it is possible to read this as a standalone, the reader is doing his or herself a disservice by not starting at the beginning. Pardon me while I start again with Replay #1. This is so good!
Read more
4 people found this helpful
Report abuse
See all reviews
Back to top
Get to Know Us
Make Money with Us
Let Us Help You
And don't forget:
© 1996-2021, Amazon.com, Inc. or its affiliates