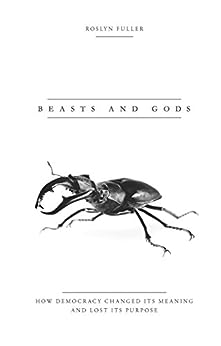 Beasts and Gods: How Democracy Changed Its Meaning and Lost Its Purpose Kindle Edition

"A visionary thought experiment...guaranteed to make you think differently about the trillion dollar bureaucracies we call democracy today." --Forbes

"There is no doubting the timeliness of Fuller's contribution to the ongoing debates over the future of democratic government." --The European Legacy "Beasts and Gods is a timely and provocative look behind the clichés of Western politics. It recognises that government of the people, by the people, is not what our current democracies feel like to most of their citizens. Fuller returns to the roots of democracy in classical republican practice and rediscovers the sources of the renewal that is urgently required. Her optimism makes this not just a challenging book but a heartening one." --Fintan O'Toole, deputy editor, Irish Times "Fuller's is a timely book, laying out the myriad problems with modern democracy in plain English. Anyone concerned with the lack of participation in our modern democracies must read this." --Jillian York, director of International Freedom of Expression at the Electronic Frontier Foundation "Beasts and Gods provides a fascinating contrast between democracy in theory and democracy in practice. It deconstructs the assumptions underlying representative democracy, and debunks the fiction that modern elections are "free and fair". This provocative book draws on lessons from ancient Greece, while advocating direct democracy by decoupling economics from politics." --Marjorie Cohn, professor of law, Thomas Jefferson School of Law "Everyone interested in rethinking democracy in the digital age should read this book. The old ways of governing are dying, and Beasts and Gods offers timely and provocative ideas on how to finally make people power a reality." --Micah Sifry, author of Wikileaks and the Age of Transparency "Fuller takes the much needed leap from pointing out what's wrong with our democracies to proposing a parallel system based on democracy's original foundations. It's a strong reminder that democracy is and must always be a work in progress, or it won't be a democracy at all." --Pía Mancini, democracy activist and co-founder of DemocracyOS "Every now and then Modern society throws up someone who questions its most cherished myths. The how and why of it deserves a book in its own right. Roslyn Fuller is one such, and, in this work, she takes on a holy cow, Democracy, that the West loves to believe it invented (like all good things). She is a young scholar, but gifted with the right intuition, attitude, and talent to take it on, full frontal, from A to Z. As such the book is a refreshing, and highly timely, tour de force, putting both conventional apologetics and hoary critiques to shame. It dares us to rethink the myth, and perhaps even to, finally, infuse some real content to it - before we are all entrapped in irreversible Oligarchy." --Rajani Kanth, Harvard University --This text refers to the paperback edition.

Dr Roslyn Fuller is currently a Research Associate at Waterford Institute of Technology and has lectured in International Law at Trinity College, Dublin and National University of Ireland, Maynooth. She is also Legal Correspondent for Russia Today, contributing a regular column on issues of international law. --This text refers to the paperback edition.

David F
5.0 out of 5 stars Read this!
Reviewed in the United States on 16 October 2016
Verified Purchase
Depressing, timely, very important, get it before it is disappeared.
Not a good news book. A frightening look at the future.
Read more
3 people found this helpful
Report abuse
See all reviews
Back to top
Get to Know Us
Make Money with Us
Let Us Help You
And don't forget:
© 1996-2021, Amazon.com, Inc. or its affiliates