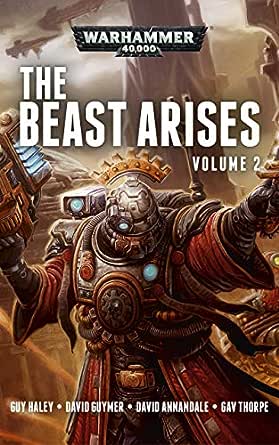 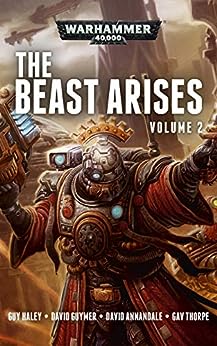 The Imperium’s situation has never been more grim – an ork attack moon hangs over Terra, and ork armadas ravage human space. It seems nothing can stop the greenskins – neither brute force, science, nor faith. When the Adeptus Mechanicus reveal they have discovered the orks’ point of origin, the Space Marines gather their forces for a massive assault on their enemy’s home world. But what the Imperial forces need is a figurehead, a hero from legend to lead them – a primarch. Can one these figures from legend be found, let alone persuaded to aid them?

The War of the Beast continues – but with aeldari on Terra, an ork attack moon in orbit, and no figurehead to lead the Imperium's armies, the situation looks grim. What they need is a primarch…

It's the middle act of Black Library's astonishing event series, and secrets are revealed – like the true fate of one of the legendary primarchs.

Guy Haley is the author of the Horus Heresy novels Wolfsbane and Pharos, the Primarchs novel Perturabo: The Hammer of Olympia and the Warhammer 40,000 novels Dark Imperium, The Devastation of Baal, Dante, Baneblade, Shadowsword, Valedor and Death of Integrity. He has also written Throneworld and The Beheading for The Beast Arises series. His enthusiasm for all things greenskin has also led him to pen the eponymous Warhammer novel Skarsnik, as well as the End Times novel The Rise of the Horned Rat. He has also written stories set in the Age of Sigmar, included in War Storm, Ghal Maraz and Call of Archaon. He lives in Yorkshire with his wife and son.
click to open popover

Kieth Gunter
2.0 out of 5 stars False Advertising
7 February 2019 - Published on Amazon.com
Verified Purchase
I don't know if I got a misprint copy of the book or what, but the copy I received does not contain the books listed in the description. In "The Beast Arises" volume 1, the books contained within are "I am Slaughter", "Predator, Prey", "The Emperor Expects", and "The Last Wall".
In Volume two, the books listed in the description are "Throneworld", "Echoes of the Long War", "The Hunt for Vulkan", and "The Beast Must Die".
That being said, the first book in volume two is actually "The Last Wall"; the last book in the first volume, which means that volume two only has number 4-7 in the series, instead of 5-8 like it has listed, not to mention that the first book in volume two is mislabeled.
Overall it's a good product, I love the Warhammer universe and wish to own one copy of every book in the Black Library. That being said, I'll be contacting the Black Library about this. I want to know exactly what happened and why.

Dustin Barlow
5.0 out of 5 stars An Great Omnibus!
23 December 2018 - Published on Amazon.com
Verified Purchase
Contains books 5 - 8 in the Beast Arises series. They are really good books full of action, with a couple of political maneuvering scenes with the High Lords that really fleshes out the Lore nicely. I really enjoyed reading this book plus it's only $13 which is a steal!

Only complaint I had is I wish Esad Wire (the Imperial Assassin) was featured more.

*Spoiler on one of Esad Wire's scenes in the last book*

Him going toe to toe with that Eldar Wardancer Ultra Elite in the book 4 was the stuff of legends, but he doesn't do a whole lot of fighting in this one. Mostly just sleuthing around in a few scenes and that's it.

Hiram
1.0 out of 5 stars Not the Brightest Star
13 December 2019 - Published on Amazon.com
Verified Purchase
I loved the fist 4 books/first omnibus and was expecting a lot from this one, but it is lacking content and speed, kinda lagging on the character side too, it was, honestly, a drag to finish reading this, and I will probably wait a bit before deciding if I want to finish this saga or Not.
I'm gonna go read some Star Wars or Zombie books before, to wash out the bad taste of this one.
Read more

Matt
1.0 out of 5 stars First book in this volume is Not Throneworld...
5 April 2019 - Published on Amazon.com
Verified Purchase
I just finished reading The Beast Arises Vol. 1 and started reading Vol. 2. The first book in Vol. 2 is actually the last book in Vol. 1. So now I will have to order Throneworld separately if I actually want to continue reading the series.
Read more
2 people found this helpful

Louis
4.0 out of 5 stars Great read!
2 March 2019 - Published on Amazon.com
Verified Purchase
First quarter of the book is the last two chapters in the first book. Upsetting they did that.
Read more
Go to Amazon.com to see all 6 reviews 2.6 out of 5 stars
Get FREE delivery with Amazon Prime
Prime members enjoy FREE Delivery and exclusive access to movies, TV shows, music, Kindle e-books, Twitch Prime, and more.
> Get Started
Back to top
Get to Know Us
Make Money with Us
Let Us Help You
And don't forget:
© 1996-2020, Amazon.com, Inc. or its affiliates