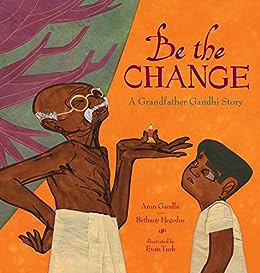 Be the Change: A Grandfather Gandhi Story Kindle Edition

“Gandhi and Hegedus’ relatively lengthy text is alternately direct and lyrical. . . . Turk’s striking mixed-media illustrations . . . complement the complexity of the ideas being explored and illuminate the subdued action of the text.” ― Kirkus Reviews

“Turk’s artwork is stunning in composition and color throughout…As a vehicle for showing the human side of the seminal figure that is Gandhi, this is a valuable title for young readers.” ― Horn Book

* “The full-bleed spreads immerse readers and take them on the journey. . . . This handsome book asks a lot of young readers but carries important messages delivered in a personal and relatable manner.” ― School Library Journal, starred review

“An in-depth exploration of the connections between waste and violence. . . . As in the previous book, Turk’s mixed-media images create a vibrant, dazzlingly imagined backdrop for the weighty philosophical discussions at play.” ― Publishers Weekly --This text refers to an alternate kindle_edition edition.

Arun Gandhi, born in 1934, is the fifth grandson of Mohandas K. Gandhi, also known as Mahatma Gandhi. He was a journalist for more than thirty years for the Times of India and has written for The Washington Post. His first of two books for children was Grandfather Gandhi. Currently, Arun serves as president of the Gandhi Worldwide Education Institute and travels the world speaking to governmental leaders, as well as to university and high school students about the practices of peace and nonviolence. He lives in Rochester, New York. Visit him at ArunGandhi.org.

Bethany Hegedus is the author of Between Us Baxters and Truth with a Capital T, as well as the coauthor of Grandfather Gandhi. She owns The Writing Barn, a writing workshop and retreat center in Austin, Texas. She teaches widely and speaks across the country. Visit her online at BethanyHegedus.com.

Evan Turk is an Ezra Jack Keats Award–winning illustrator, author, and animator. He is the author-illustrator of The Storyteller, Heartbeat, You Are Home: An Ode to the National Parks, and A Thousand Glass Flowers and the illustrator of Muddy: The Story of Blues Legend Muddy Waters, which was a New York Times Best Illustrated Children’s Book; Grandfather Gandhi; and its companion Be the Change. Originally from Colorado, Evan now lives in the Hudson River Valley with his husband and two cats. He is a graduate of Parsons School of Design. Visit him at EvanTurk.com. --This text refers to an alternate kindle_edition edition.

4.8 out of 5 stars
4.8 out of 5
44 global ratings
How are ratings calculated?
To calculate the overall star rating and percentage breakdown by star, we don’t use a simple average. Instead, our system considers things like how recent a review is and if the reviewer bought the item on Amazon. It also analyses reviews to verify trustworthiness.

Anjali
5.0 out of 5 stars Good hard bound book
Reviewed in India on 13 July 2017
Verified Purchase
A great book for kids if you want to introduce the Gandhian concept to them. Good for adults equally.
Read more
Report abuse

Amazon Customer
5.0 out of 5 stars Five Stars
Reviewed in India on 19 February 2018
Verified Purchase
Every one should read it and take some lessons from it
Read more
Report abuse