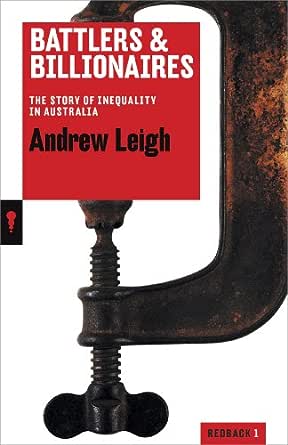 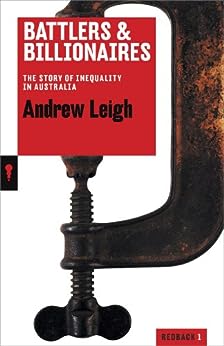 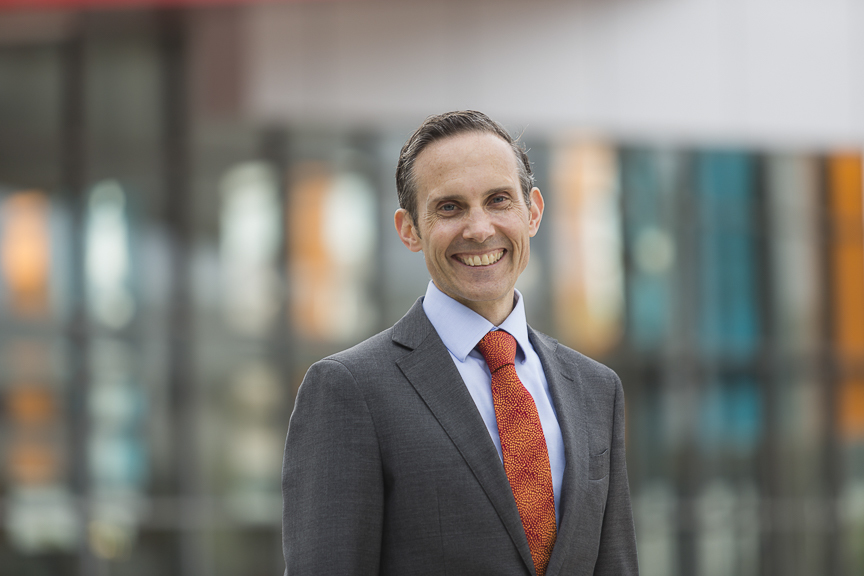 Battlers and Billionaires sheds fresh light on what makes Australia distinctive, and what it means to have - and keep - a fair go. --This text refers to an out of print or unavailable edition of this title.

Andrew Leigh is the federal member for Fenner and the Shadow Assistant Treasurer. Before being elected in 2010, he was a professor of economics at the Australian National University. His books include Disconnected (2010), Battlers and Billionaires (2013) and The Economics of Just About Everything (2014). --This text refers to an out of print or unavailable edition of this title.

3.8 out of 5 stars
3.8 out of 5
18 global ratings
How are ratings calculated?
To calculate the overall star rating and percentage breakdown by star, we don’t use a simple average. Instead, our system considers things like how recent a review is and if the reviewer bought the item on Amazon. It also analyses reviews to verify trustworthiness.

cranky
5.0 out of 5 stars Battlers Versus Billionaires ?
Reviewed in Australia on 26 March 2015
Verified Purchase
It's not often that an economist can make his topic both engaging and enlightening but Doctor Leigh is to be congratulated for his achievement. The communal implications of income and wealth inequality are elucidated in a manner that should spark more discussion in the corridors of power.
Read more
Helpful
Report abuse

allencar
4.0 out of 5 stars Equal but not the same
Reviewed in Australia on 29 April 2015
Verified Purchase
Well researched and presented with interesting examples and preambles to make a very boring (but never the less important) subject worth turning the page over. Definitely thought provoking and certainly debatable but undeniably correct.
Read more
Helpful
Report abuse

VINCE bourke
5.0 out of 5 stars The peasants are revolting
Reviewed in Australia on 29 May 2015
Verified Purchase
Great book for now as the Current government further widens the inequality gap. Well done Andrew

Essential reading for anyone to understand where society is headed
Vjb

Grace Duncan
1.0 out of 5 stars One Star
Reviewed in Australia on 21 March 2015
Verified Purchase
Too many technical graphs!
Read more
Helpful
Report abuse

Jason
5.0 out of 5 stars Five Stars
Reviewed in Australia on 20 December 2015
Verified Purchase
10 out of 10, makes you really think about our society.
Read more
Helpful
Report abuse

Brian Ede
5.0 out of 5 stars To tackle a problem you first have to admit its existence. To know it you have to define it.
Reviewed in Australia on 23 September 2014
Verified Purchase
One of those rare books on economics that makes you want to sit down with the author over a glass of wine and have an in-depth discussion on public policy. What is this many faceted thing we lump together as 'poverty', how has it been addressed in the past and how can it be taken on in its various guises in a modern economy.
Read more
One person found this helpful
Helpful
Report abuse
See all reviews

Dean Marden
5.0 out of 5 stars An Instinct for Equality
Reviewed in the United States on 17 July 2013
Verified Purchase
I know this book is at its core a discussion on inequality, but its lasting impact on my mindset has been a little divorced from that. I've always disliked questions like, 'Aren't you proud to be Australian?', with the usual drawl applied to the middle syllable of the demonym. To me, that's like asking if I'm proud to be blue-eyed, proud to be adopted, or proud to be bisexual: I didn't have a choice in any of these, so can't really feel proud or otherwise about them.

After reading this book, I actually felt proud to be Australian, probably for the first time. I have a greater appreciation of the effects the longer-term and ingrained instincts of 'Australianism' (if there's such a thing) have had on my instincts in dealing with the world and other people.

I'm a writer myself, but in my only published work, an instinctive cultural cringe had me de-regionalising the piece during its final edit. All references to Australia became 'the nation', with Canberra simply becoming 'the capital'. That instinct speaks to something about Australians that you only recognise about us after returning from overseas trips: it's right there in the airport. Even though people may be flustered or stressed or have things to do, it becomes obvious - after contrasting their actions with those of people overseas - that there's something instinctive in them that knows their frustrations are only temporary - they know that 'she'll be right' in fairly short order. There's an instinctive distrust of anyone who takes anything too seriously, and this includes politicians banging on about issues that people can't recognise the practical impacts of; if they're talking about it so much without communicating practicalities, then they're taking either the issue or themselves too seriously and aren't worth listening to - not when there's actual stuff to be gotten on with by the average punter.

From reading this book, I now have a greater appreciation as to how all those instincts in both myself and the people around me have come about, and how it's shaped me as a human being. We're all in this together, which goes back to convict and colonial times when we knew we had to work together if we were ever to make anything of this giant lump of sand in an oft-forgotten corner of the world.

Maybe there are quite a few things about our national character and collective instincts that do deserve to be taken a little more seriously and given the applause they deserve.
Read more
7 people found this helpful
Report abuse

Andrew McCutcheon
4.0 out of 5 stars The gap between rich and poor is increasing in Australia. Can we turn this trend around?
Reviewed in the United States on 6 May 2014
Verified Purchase
Andrew Leigh has wide experience researching this topic over several decades, working with a wide range of colleagues from the OECD, and universities in a number of countries before being elected to the Australian House of Representatives.

The book contains a valuable exposition of the gap between rich and poor. Told with sensitivity, and not drawing extravagant conclusions, it is a measured and wide ranging contribution. Leigh's capacity to carry the argument and clarify what the conclusions are to each of the various aspects that he has studied are communicated to the lay person with clarity and logic.

Battlers and Billionaires provides a valuable base for anyone interested in moving public policy toward a more just and fairer society. It is not ideological, but seeks to build an evidence based understanding of where we are today, and some of the difficulties to be encountered in moving to a more equitable place.
Read more
Report abuse

PAUL MAGGS
5.0 out of 5 stars SCHOLARLY YET READABLE
Reviewed in the United States on 24 March 2014
Verified Purchase
I enjoyed reading this book. It is very obvious that Andrew Leigh is a scholarly economist and has partaken in much research with this topic of social and economic equality. Andrew does not ram his opinions onto the reader but guides the reader through a complicated subject that is too often dismissed by the general public with superficial opinions and simplistic solutions.
Read more
Report abuse

David Shewan
2.0 out of 5 stars Two Stars
Reviewed in the United States on 18 August 2014
Verified Purchase
Bit too academic to fully enjoy
Biased political views
Read more
Report abuse
See all reviews
Back to top
Get to Know Us
Make Money with Us
Let Us Help You
And don't forget:
© 1996-2021, Amazon.com, Inc. or its affiliates