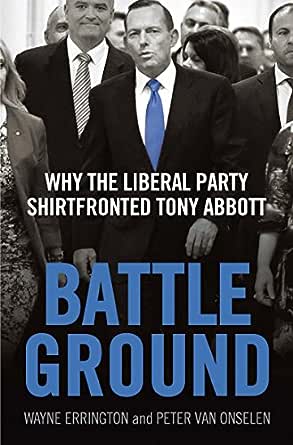 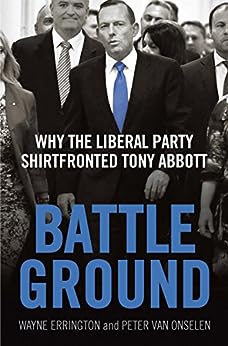 Tony Abbott came to the prime ministership lauded as the most effective leader of the opposition since Whitlam. Why then did he fail to succeed in the job to which he had aspired for decades? Frontbenchers leaked about cabinet processes to the media while backbenchers complained about the lack of access to their leader.

Abbott's long apprenticeship in religion, journalism and political life prepared him for neither the mundane business of managing people nor the commanding heights of national leadership. Public goodwill evaporated after a tough first budget. Inside the Liberal Party individual ambitions and a succession of poor polls fuelled increasing concern that the next election was unwinnable.

Battleground chronicles the paradox of the Abbott prime ministership: steadfast loyalty when pragmatism was required; social values at odds with community attitudes; stubbornness when tactics and strategy were essential. All would bring him undone.

Dr Peter van Onselen is a contributing editor at The Australian and a presenter at Sky News. He holds the chair of journalism and is a professor in politics at the University of Western Australia.
Wayne Errington is the author of numerous books and articles about Australian politics. He is senior lecturer in politics at the University of Adelaide.
Together they wrote the best-selling biography John Winston Howard, described by Laurie Oakes as 'The definitive book on one of the most important politicians of our time.' Battleground is the first time these authors have combined forces since and the result is equally powerful.

G. Budrikis
3.0 out of 5 stars A solid book by an authoritative author who is well qualified to write this piece.
6 March 2016
Format: Kindle EditionVerified Purchase
One of quite a few quick books that have come out since the fall of Abbott and rise of Turnbull. It seems like a pretty fair run down of what happened, but might go out of date fairly quickly. The writing is quite good and easy to read.
Read more
Helpful
Comment Report abuse

Jennifer Cameron-Smith
TOP 10 REVIEWER
4.0 out of 5 stars ‘It was Abbott’s failure to recognise and seek to rectify his own leadership flaws that saw him ousted.’
2 December 2015
Format: Kindle Edition
In this book, published just two months after the event, Wayne Errington and Peter van Onselen look at why Tony Abbott lost the prime ministership to Malcolm Turnbull. Why did the man who was arguably one of the most effective leaders of the opposition in the last forty years fail to make the transition to effective leadership? What went wrong?

As portrayed in this book, Tony Abbott seemed out of step, somewhat anachronistic. Yet, he displayed loyalty to colleagues which surely was sometimes misplaced. He seemed unable to change course when a different approach might have delivered better outcomes, and made ‘captain’s picks’ which had at least some of us questioning his judgement.

‘Because Abbott had always been able to rely on Howard for preferment, he had built no base of support in the party to fall back on.’

But this book is not an in depth analysis of the Abbott government, it’s an analysis of the factors that caused the Liberal Party to replace Tony Abbott with Malcolm Turnbull. It’s an interesting read, a case study in the causes and effects of ineffective leadership. The role of the Prime Minister’s Office receives a lot of attention, as does the use of particular elements of the media. Clearly, Tony Abbott did not learn much from his ‘near-death experience’ in February 2015. If he had, I doubt that the Liberal Party would have removed him as leader.

For those interested in Australian political leadership, this book is well worth reading. Many of the issues that bedevilled Tony Abbott’s prime ministership: communication, leadership and management are issues for every effective leader.

Note: My thanks to NetGalley and Melbourne University Publishing for the opportunity to read this book.

Go to Amazon.com to see all 5 reviews 3.7 out of 5 stars
Get FREE delivery with Amazon Prime
Prime members enjoy FREE Delivery and exclusive access to movies, TV shows, music, Kindle e-books, Twitch Prime, and more.
> Get Started
Back to top
Get to Know Us
Make Money with Us
Let Us Help You
And don't forget:
© 1996-2020, Amazon.com, Inc. or its affiliates