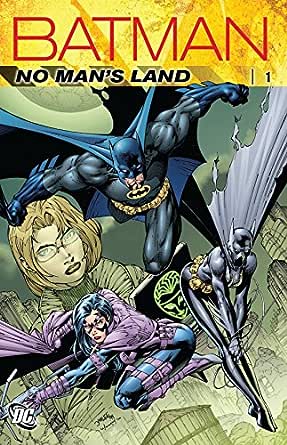 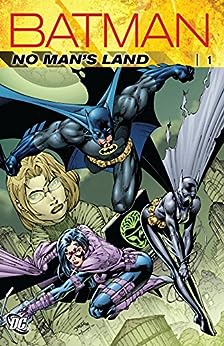 After suffering a cataclysmic earthquake, the U.S. government has deemed Gotham City as uninhabitable and ordered all citizens to leave. It is now months later and those that have refused to vacate 'No Man's Land' live amidst a citywide turf war inwhich the strongest prey on the weak. As gangs terrorize the ravaged populace, the Scarecrow uses a church relief project as a real life lab to test his experiments in fear. But with the return of the vigilante, Batman, and the appearance of anenigmatic new Batgirl, justice returns to Gotham. BATMAN: NO MAN'S LAND VOL. 1 is the first chapter in the monumental crossover event that changed Gotham City and the Dark Knight forever. Collects BATMAN: NO MAN'S LAND #1, BATMAN: SHADOW OF THE BAT #83-86, BATMAN #563-566, DETECTIVE COMICS #730-733, AZRAEL: AGENT OF THE BAT #51-55, BATMAN: LEGENDS OF THE DARK KNIGHT #117-118 and BATMAN CHRONICLES #16.
See all Product description
click to open popover

Stuart S
4.0 out of 5 stars An Excellent Beginning to the No Man's Land Saga
8 May 2016 - Published on Amazon.com
Verified Purchase
This is a challenging collection to review, as it encapsulates so many characters, artists, and writers. If you don't know, No Man's Land was a huge event dealing with Gotham city being declared a No Man's Land after enduring a massive earthquake. The event spanned several titles, in the end covering over a year's worth issues for said titles. This is the first volume of four, so you may be asking yourself 'is it worth getting into the No Man's Land story?' I say yes, and here is my proof.

The writing is compelling and rarely stagnate. This is genuinely interesting material, with dozens of characters woven into its structure, some minor, others well-known. This volume contains a healthy variety of multi-issue arcs and one-shot stories. While it is called BATMAN: No Man's Land, I would say at least a third of the stories never feature him directly. In fact, his absence is a key element to this story. Certain titles are a little weaker, and they do slow down the story, but this is infrequent. This isn't the most action-filled collection, so don't expect to see brawls every other page. There is development that doesn't immediately pay-off, but don't let that deter you. Good things are worth the wait.

One unexpected highlight for me were the Azrael issues. I'm not the most experienced Batman reader, but I have a pretty solid understanding of his world. I knew Azrael was the violent nut who filled in for Bruce while he was taking time off after Bane freed up a lot of his busy schedule. That being said, I knew just enough about him that I didn't expect much from his story. I think this set me up to be pleasantly surprised by Azrael, a character I now hold in a higher regard.

The art is a bit of a mixed bag; don't be misled by the Jim Lee cover, it's the only thing he contributes to this volume. Main titles tend to have better quality art, while issues featuring Azrael have more basic, less stunning work. Remember, DC comic books at this time were not as fortunate as they are today in terms of art, but that doesn't mean expect 400 pages of mediocrity. It wouldn't be fair to say there are diamonds in the rough, because the majority of art is not rough. The writing carries the story here, which I think is better than the other way around (All-Star Batman and Robin, anyone?).

To end, this is not a story for someone looking for a casual read on Batman with a self-contained arc. If all you know about Batman are his most basic elements, I cannot in good conscience recommend it. It would be confusing, and unfair to both you and the book. Now, for a casual fan, yes I highly recommend No Man's Land. Some say this is the most important Batman arc of the last twenty years, and I can see why. Be warned, however, reading No Man's Land is a commitment, and not exactly cheap. This is not a stand-alone collection; Gotham is hardly back normal at the end of volume 1. With that in mind, there aren't any jarring cliff-hangers polluting the end of this collection, either.

DC isn't goading your purchase of future volumes with half-complete stories, broken up only for the sake of higher sales. I was convinced to purchase volume 2 without any sense of feeling cheated in volume 1. If you feel you're up to it, you won't be disappointed.

clairetoldmetochangemyscreenname
5.0 out of 5 stars Terrific Opening to the Main No Man's Land Saga
25 January 2017 - Published on Amazon.com
Verified Purchase
No Man's Land is the massive Batman event series that spans a grand total of four volumes and used an intriguing premise to explore an entire new outlook on Gotham City and the Bat Family that defends it. Starting with the prequel books Cataclysm and Road to No Man's Land, Gotham City is subjected to a brutal natural disaster. A massive earthquake rocks the city to its foundation and leaves much of Gotham desolated. Batman struggles to help the city recover, but as this isn't a normal threat that Bats faces there isn't much he can do at any given time. The story continued in RtNML in which Batman tries to help the failing city recover its infrastructure as Bruce Wayne only for his efforts to be overcome by a character named Nicolas Scratch: a cult icon heavy metal rocker who somehow manages to convince the entire country that Gotham should be abandoned. Scratch is a dreadful villain as there is nothing about that is believable (imagine Gene Simmons from KISS essentially going on TV and convincing everyone not to help rebuild New Orleans after Hurricane Katrina, it's that odd an idea). Putting his shortcomings aside, however, this series explores Gotham after having been abandoned by the government. The city has been evacuated with only the most destitute civilians (and plenty of Gotham's crazies) left behind to pick at the carcass.

The story picks up a few months after Road to No Man's Land. Batman is still AWOL and it is down to Huntress and the remnants of the Gotham Police to try to take back the streets of Gotham block by block. The first book is electric and fascinating as it explores Commissioner Gordon's efforts to launch a gang-war style takeover of this new world that has consumed Gotham. Guns no longer have as much value because bullets are scarce, instead the main currency and source of power becomes territory and food. Gale does a wonderful job setting up this riveting scenario despite the certain unbelievable nature of the whole thing. The only real moments when the story's quality dips in this volume is when the action switches back to Azrael's story arc from RtNML. Azrael has been tasked with taking down Nicholas Scratch who, again, is the worst part of No Man's Land.

The story certainly picks up when Batman finally returns to find Gotham a devolved beast of a city. His previous crime fighting tactics no longer hold as much influence and Bats is forced to learn the culture of No Man's Land to actually affect any change.With Gordon and Bats on the outs (the former is furious it has taken the latter so long to return), Bruce is effectively all on his own. Great story overall and partially the influence behind Bane's takeover in Gotham in The Dark Knight Rises. You will want to have checked out Cataclysm and RtNML before jumping into this story, though, as it picks up in the midst of the larger narrative arc. You could potentially get by at least just knowing that Gotham was hit by an earthquake and abandoned by the rest of the country.
Read more
One person found this helpful

Fernando H. Ramirez
3.0 out of 5 stars Okay
10 January 2014 - Published on Amazon.com
Verified Purchase
Bought this on my KINDLE HD 9.5. The concept was interesting.... thought it would be a good read. Gotham has been devastated by a massive earthquake, and Batman has disappeared. People are trying to put the pieces together. Gangs have overrun the city, and divided it into territories. Gordon is there to bring back some semblance of law and order. He feels anger at the Batman for having left. Honestly... I got angry too... as the Batman didn't make his re-entrance to the stories until I was like 1/2 way or 3/4 of the way through this first volume. And it wasn't really explained why he was gone. Not having read the previous issues... I didn't know why Bats was gone. But he does return late in the volume as I explained... and this improves the stories somewhat. I didn't care for a lot of the artists... some of them were okay. The writing was okay, but I've read better. The best thing about this was the overall concept. But I didn't care enough to read subsequent volumes. There is better BATMAN material out there. Seek that out. Or if you are a Batman freak... you may love this. Your choice!
Read more
3 people found this helpful
Go to Amazon.com to see all 41 reviews 4.1 out of 5 stars
Get FREE delivery with Amazon Prime
Prime members enjoy FREE Delivery and exclusive access to movies, TV shows, music, Kindle e-books, Twitch Prime, and more.
> Get Started
Back to top
Get to Know Us
Make Money with Us
Let Us Help You
And don't forget:
© 1996-2020, Amazon.com, Inc. or its affiliates