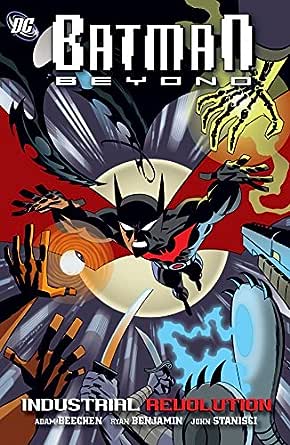 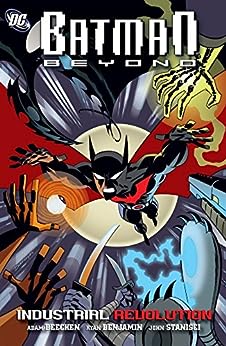 The alliance of Terry McGinnis and Bruce Wayne is stronger than ever after their battles in 'Hush Beyond'. But now a superpowered criminal has gotten in way over his head--and the whole Justice League has come to Neo-Gotham to hunt him down! Also, there is much unrest at Wayne-Power Industries. Who is starting these riots and more importantly, will Batman be able to stop them?

Adam Beechen has been one of the most sought-after writers of animation and comic books of the last decade. He has written for DC Comics' Batman Beyond, Justice League Unlimited, Teen Titans, Robin, Batgirl, Legends of the Dark Knight, and such animated series as Teen Titans, The Batman, Batman: The Brave and the Bold, X-Men Evolution, and Ben 10. Needless to say, he's thought a lot about superheroes and the worlds they live in. Dustin Nguyen is a New York Times bestselling and Eisner Award-winning American comics creator. Currently, Dustin illustrates Descender, a monthly comic published through Image Comics of which he is also the co-creator, alongside artist/writer Jeff Lemire. He is also working on the next installment of Scholastic's Secret Heroes Society as well as Batman: Li'l Gotham for DC Comics with Derek Fridolfs. His past body of work includes Batman, Superman/Batman, Detective Comics, Batgirl, American Vampire, Justice League Beyond, and many, many more. Darwyn Cooke was an Eisner Award-winning cartoonist and animator. After spending several years as a magazine art director and graphic designer, Cooke switched careers and began working in animation, where he contributed to such shows as Batman: The Animated Series, Superman: The Animated Series, and Men in Black: The Series. DC Comics then approached Cooke to write and illustrate Batman: Ego, which Cooke had pitched unsuccessfully several years earlier. The critical success of the title led to the relaunch of the Catwoman series with writer Ed Brubaker. Cooke then spent several years writing and drawing the ambitious epic The New Frontier. He was also the writer/artist of Before Watchmen: Minutemen and co-writer of Before Watchmen: Silk Spectre.
click to open popover

AA
5.0 out of 5 stars Blight Returns!
7 October 2019 - Published on Amazon.com
Verified Purchase
So, I read this a little bit out of order (I read 10,000 Clowns first; oops), but it was still a great book. I'm a little disappointed that there's no resolution to the Grayson plotline and none for the foreseeable future, but I was overjoyed with the Blight story. I was always disappointed that the TV show left it so open-ended but then never had Blight come back for revenge; talk about a waste of a great villain! But here he comes with a sense of entitlement worthy of a toddler or a 1%er and the radioactive powers to make that mentality more dangerous than it otherwise would be. I also liked the little origin short for Inque; we never do get an origin for her in the show and it's good to see it expanded upon here.
Read more

Bastion Drake
4.0 out of 5 stars 7.5/10
25 August 2013 - Published on Amazon.com
Verified Purchase
Like all Beyond Novels, Industrial revolution takes place in the animated universe as opposed to the New 52. This has its pros and cons. For one There is perfect continuity with all past Batman Beyond stories. On the other hand it cannot participate in New 52 events such as Night of the owls. How cool would it have been to see one of the assassins of the court trying to take revenge on Bruce Wayne in the future? The art style has improved over the previous graphic novel Hush Beyond. However the plot is forgettable. There is an exciting moment where with the exception of Superman Batman beats the crap out of everyone in the Justice League following the #1 rule of the DC universe. "Batman always wins." However this fight is utterly pointless. Bruce just has Terry wail on them for a territorial dispute during a serious hostage situation. Still I greatly enjoyed it.
Read more

zombie1
5.0 out of 5 stars batman beyond awesome
21 April 2014 - Published on Amazon.com
Verified Purchase
Always been a fan of batman beyond the animated series . And these comics are a great addition to that story line. You can't go wrong batman beyond fans, this comic book collection is for you. The stories are really good and keeps me wanting more.
Read more

T Flopstar
4.0 out of 5 stars Good read- sequel to Hush Beyond
9 June 2014 - Published on Amazon.com
Verified Purchase
Great to see the BB universe continue. Volume has a couple small subplots rather than one long story arc- I enjoyed the ride and could hear the old WB tv show theme in my head. I suppose I should break out those DVDs.
Read more

Court
3.0 out of 5 stars Batman beyond: industrial revolution
1 April 2013 - Published on Amazon.com
Verified Purchase
It's...okay? The writer doesn't seem to understand batman very well and there are quite a few continuity errors. It was interesting and some things made sense but not incredible.
Read more
Go to Amazon.com to see all 14 reviews 4.3 out of 5 stars
Get FREE delivery with Amazon Prime
Prime members enjoy FREE Delivery and exclusive access to movies, TV shows, music, Kindle e-books, Twitch Prime, and more.
> Get Started
Back to top
Get to Know Us
Make Money with Us
Let Us Help You
And don't forget:
© 1996-2020, Amazon.com, Inc. or its affiliates