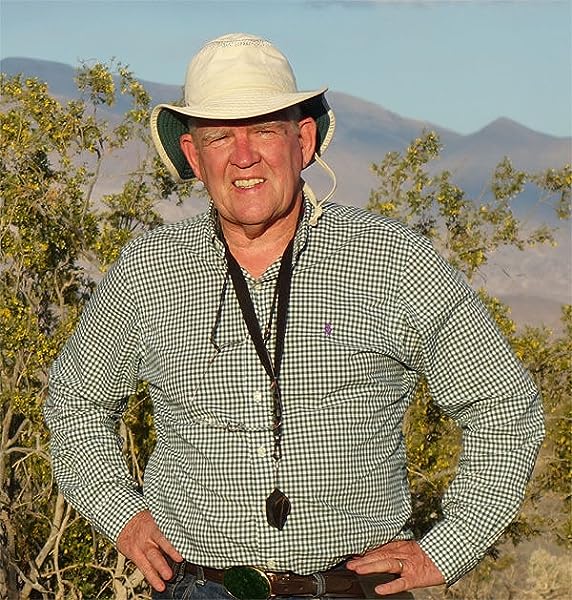 by Robert Moriarty (Author), Jeremy Irwin (Editor)
4.6 out of 5 stars 107 ratings
See all formats and editions
Sorry, there was a problem loading this page. Try again.

Page 1 of 1 Start overPage 1 of 1
Previous page
Next page
Start reading Basic Investing in Resource Stocks: The Idiot's Guide on your Kindle in under a minute.

Robert Moriarty was born in New York state in 1946. He began training as a military pilot in 1965 and became the youngest Naval Aviator during the Vietnam War in 1966. With two years in Vietnam and some 832 missions in combat, he left the Marine Corps in 1970. He worked in computers for a few years before beginning a 2nd career as a ferry pilot delivering small airplanes all over the world. He made over 240 ocean crossings mostly in single engine airplanes.

He and his wife of 30 years were computer consultants and began one of the earliest online computer retail outlets in 1995 before retiring in 2000. He began another career running a financial website in 2001 specializing in resource companies. He continues to travel the world looking for the next great mineral discovery and writes in his spare time.

4.6 out of 5 stars
4.6 out of 5
107 global ratings
How are ratings calculated?
To calculate the overall star rating and percentage breakdown by star, we don’t use a simple average. Instead, our system considers things like how recent a review is and if the reviewer bought the item on Amazon. It also analyses reviews to verify trustworthiness.

Ray Mickelberg
5.0 out of 5 stars Investing with common sense
Reviewed in Australia on 19 February 2019
Verified Purchase
Bob Moriarty's latest book is a must read for anyone looking to successfully invest in the resource sector, or in the general market. His straight forward approach to markets using sentiment and simple common sense will benefit anyone. In particular, his advice on actually taking profits rather than constantly looking for the mythical 10+ bagger is priceless. If you want to make money in any market this book is required reading.
Read more
Helpful
Report abuse

PR
4.0 out of 5 stars This book contains no BS
Reviewed in Australia on 13 March 2019
Verified Purchase
Bobs done it again.Unlike all the paid sites,gurus and self professed experts that promise you the world then give you an ATLAS, Bob delivers.Honesty,common sense and a lot of practical experience, Bob gives you what it takes to be a contrarian investor.If you want to save time, money and a lot of BS this is your book.
Read more
Helpful
Report abuse

Talented People Pty Ltd
5.0 out of 5 stars Plain speaking by a seasoned expert
Reviewed in Australia on 25 March 2019
Verified Purchase
Plain speaking by a seasoned expert on resource stock investing. This is a follow on to his previous “Nobody Knows Anything”, but specific to mining and royalty streaming investments. Worth reading both.
Read more
Helpful
Report abuse
See all reviews

Eric
4.0 out of 5 stars Another very good book from Mr Moriarty
Reviewed in the United Kingdom on 24 March 2019
Verified Purchase
After having read Moriarty's book 'Nobody knows anything' I immediately ordered this new book. It was not a disappointment and definitely worth its price. I unconditionally recommend this book to be read by all speculators and also by investors. The text in the printed version is comfortably big even for my old eyes. The book is very easy to read and presents essential points in speculation (~trading) among others about when to sell positions. I give four stars as I want to make a difference to the earlier book. Both books are 'a must to read'.
Read more
Report abuse

SW
5.0 out of 5 stars Excellent!
Reviewed in the United Kingdom on 25 February 2019
Verified Purchase
Another brilliant book written by Bob from 321gold. Highly recommended!
Read more
One person found this helpful
Report abuse

firemagi
5.0 out of 5 stars Finally an investing book that actually makes you think!
Reviewed in Canada on 5 December 2019
Verified Purchase
I've been an energy and mining investor for about 15 years. I've made very, very good money twice and lost everything twice. I've read many books on investing and know all about charts, indicators, clever strategies, et al, but never truly felt like they taught me anything consistently useful. I heard good things about "Basic Investing in Resource Stocks" as well as "Nobody Knows Anything", which is Robert Moriarty's previous book, so I thought I'd give them both a read.

There's nothing complicated or obscure about his writing style which is fine by me so long as there's content and, yes, there was plenty of content. Instead of filling the pages with dribble, he got down to the meat and potatoes of making money. Much of it I had known for years, but the funny thing is that I just didn't realize how fundamental it was. Then there were a few gems that I guess I sort of knew, but just didn't actually know that I knew. In short, both of these books got me thinking, but most importantly, they got me thinking for myself! In fact they got me thinking well beyond the content of the books! There's no magic to flipping a switch, but the resulting light can appear like a miracle. This is the effect of simplicity and why I appreciate these books so much.

I bought both books at the same time and after reading "Nobody Knows Anything" (published 2016) I dove right into "Basic Investing in Resource Stocks" (published 2019). Moriarty wrote these two books separately, but one flows into the other and they meld together so well that I really can't write separate reviews. I wonder if the publisher will ever decide to publish them together as one edition. It seems like an obvious discussion that has probably occurred already. I will post this same review for "Nobody Knows Anything" since the two books really do belong together and provide equally valuable insight in the same manner, although they are each very capable as stand-alone reads.

I just received another book by Robert Moriarty, "The Art of Peace" (published 2016). It's seems more of an autobiography than an investment book, but I'm grateful for the two that I've already read so finding out more about the author should be interesting.
Read more
3 people found this helpful
Report abuse

Nigel, BC, Canada
5.0 out of 5 stars Great Read, Wish I had this information 30 years ago.
Reviewed in Canada on 28 April 2020
Verified Purchase
I bought this book because of the reviews I read here. I was not disappointed. Bob Moriarty has a unique writing style and keeps the reader engaged, with a good few chuckles thrown in for good measure.

I found this to be a no B.S. book on how the investment industry works, and doesn't. The book is a fascinating look behind the scenes of the stock market and at some of those in the industry that make it work, and some of those that don’t.

His Dozen Rules of Investing are worth the price of the book and more alone.

If you are new to trading then you will find this to be especially useful information, helping to avoid the pitfalls that most traders fall into. You will learn from Bob that not everything is, as it is told. He will teach you how investments work, and how to protect yourself from those who would legally steal your money from you given the opportunity.

I liked the way he covered the resource sector, and categorized the companies, great for making watch lists. His methods for handling risk and dealing with profits and losses made me rethink how I will handle my trades. One too many times the big ones slipped away, just from not knowing when to take some money off the table, or cut my loss. I wish I had this information 30 years ago.

Read the rest of the reviews here, and you, like me will be glad you bought this book.

I am eagerly awaiting a follow up to this book, as I am very curious as to what he has to say about the present state of things in the world today. (April 2020). I am sure it will be as colorful and entertaining as this book has been.

keith elliott
5.0 out of 5 stars Eye opening, to say the least!
Reviewed in Canada on 13 February 2020
Verified Purchase
One thing you can say about the author, OK maybe two... he doesn't mince his words and he packs an awful lot into his pages. Idiot's Guide is a perfect companion to Nobody Knows Anything, another of the author's wildly entertaining books. If, like me, you are one of the 90% or so who lose money in the market, this book might be the answer to turning things around. It isn't that we didn't know what to do, it's just that most of us don't do what we really should do, and that is to take a profit when it's sitting in front of you. Bob goes into some detail - repeatedly - as to what we MUST do and that alone is worth many times the small admission price of this most excellent book.
Read more
One person found this helpful
Report abuse
See all reviews
Back to top
Get to Know Us
Make Money with Us
Let Us Help You
And don't forget:
© 1996-2021, Amazon.com, Inc. or its affiliates