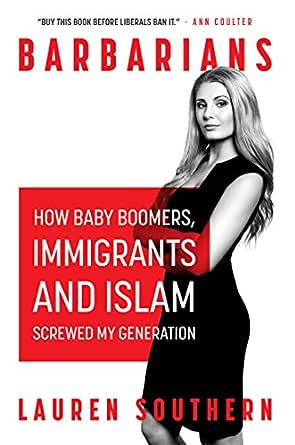 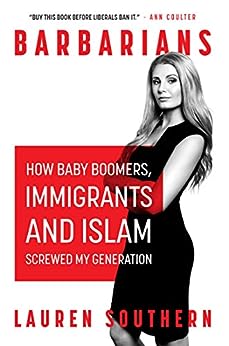 Barbarians: How The Baby Boomers, Immigration, and Islam Screwed my Generation Kindle Edition

The values that built the west have been forgotten. Instead, millennials have been raised to hold hedonism above all. Whatever feels good goes. Freedoms and rights are things for legislators and judges to conjure out of thin air, not precious traditions forged in the crucible of history. Most millennials reject the nuclear family, and the religious values, that our culture was built on because they resemble some sort of “unenlightened” old world of responsibility and duty that millennials want no part in.

In short, squaring the truth about the West with the twisted values they’ve been brought up to swallow without complaint is not something that will be comfortable for many millennials. But I think that if not now, eventually most of them will take the plunge. Because deep down I think we know that what we’ve done is not empowering. Abandoning all guidance of our past and embracing hedonism and subjectivity was not some genius idea. Dismissing the guidance built for us over thousands and thousands of years in the form of gender roles, traditional lifestyles, hard work, objectivity, and cultural supremacy was, in fact, painfully stupid.

Because really, what have we got to show for it? Nothing but infinite license to put who and what we want in our bodies, while our freedoms to speak, to think, to dream, and to build get more limited every day. We’ve decided to fall backwards off the shoulders of giants, and that fall probably feels good, until you realize there’s going to be a “splat” at the end.

So with the ground of reality rushing up at them, more and more young people are clawing for anything to stop their feelings of personal, ethical, political, intellectual and artistic failure. And the rotted timber of progressivism is increasingly failing to break their fall. So eventually, they turn elsewhere.

And so, a steadily increasing number of millennials are finally beginning to wake up to the choice we face as a civilization, and to the value they’ve so long overlooked in traditional standards of morality and beauty. They are wondering: is modern culture really so great if it means we substitute Meghan Trainor for Mozart, Emma Sulkowicz for Da Vinci, or Bell Hooks for Plato? Is it really such a step forward that our civilization, which once shed both blood and ink debating Martin Luther’s 95 Theses, is now reduced to considering theses like VICE Magazine’s “Dear Straight Guys: It’s Time to Start Putting Things In Your Butt?” Is this all there is, or can we do better?

No, it isn’t, and yes, we can and must do better. Sure, it’ll be hard for us to dig ourselves out of the pit that the left-wing indoctrination and media machines has dug for everyone our age. But it’s work worth doing. Because right now, the world is on fire. And while my generation didn’t start the fire, with apologies to Billy Joel, I believe we have a chance to contain it, or even put it out.

But first we have to expose the frauds, liars, idiots, and above all, barbarians who threw gas on it. So without further ado, let’s get to naming those names.

Lauren Southern is a right-wing activist, writer and pundit for TheRebel.media. She is well known for her commentary on feminism, free speech, and immigration. Lauren has contributed to a number of programs and websites including CBC radio, BBC Radio, The Libertarian Republic, Spiked Online, IB Times, and Sky News. She is an avid reader and lover of liberty, individualism, and responsibility.

David
5.0 out of 5 stars Witty and insightful
7 November 2018
Format: Kindle EditionVerified Purchase
Lauren doesn't disappoint.
She writes with a vivacious and engaging style, speaking authoritatively on the ills of modern politics. A must-read if you want to know why the world is going to sh*t.

John Chesterfield
5.0 out of 5 stars Brilliant book all must read we have been betrayed
28 December 2016
Format: Kindle EditionVerified Purchase
This book has answers to many of the questions you may answered about what is happening to the west. It explains how we have been mislead by well meaning helpers of globalism. The good news is we can all make a difference to make our nations better.
Read more
4 people found this helpful
Helpful
Comment Report abuse

Anthony
5.0 out of 5 stars Excellent.
31 December 2016
Format: Kindle EditionVerified Purchase
Brilliant in its brevity and scathing in its overview of the venomous forces crippling the West. But it is not a gloomy, defeatist book. It is a vibrant, vigorous voicing of the rise of nationalism presently sweeping over the western world.
Read more
2 people found this helpful
Helpful
Comment Report abuse

Kindle Customer
5.0 out of 5 stars She's right
29 December 2016
Format: Kindle EditionVerified Purchase
Some very good points presented in a lighthearted view of a topic that is normally dry. Refreshing. As a Gen-X'er the point that Conservatives are no longer "right-wing" struck me strongly.
Read more
2 people found this helpful
Helpful
Comment Report abuse

Jesse King
5.0 out of 5 stars An excellent summary of the problems us Millennials are inheriting.
17 October 2018
Format: Paperback
An excellent read! Lauren makes tons of good points, many of which I wasn't already aware of. After fifty years of liberal garbage becoming mainstream, it feels like we're reaching a tipping point, which she sums up nicely.
And considering she wrote this at only 21, I'm very impressed. She's got an incredible grasp of the English language, and that's coming from someone who's read Tolkien.

Go to Amazon.com to see all 424 reviews 4.4 out of 5 stars
Get FREE delivery with Amazon Prime
Prime members enjoy FREE Delivery and exclusive access to movies, TV shows, music, Kindle e-books, Twitch Prime, and more.
> Get Started
Back to top
Get to Know Us
Make Money with Us
Let Us Help You
And don't forget:
© 1996-2020, Amazon.com, Inc. or its affiliates