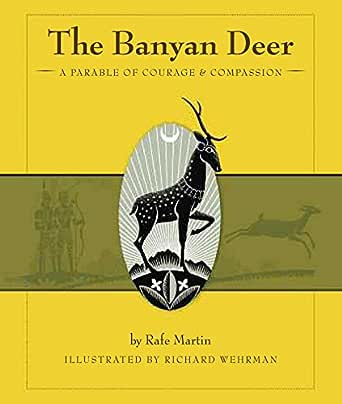 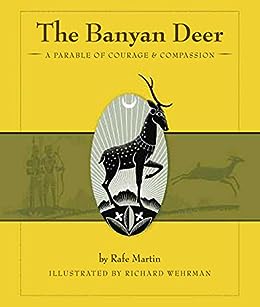 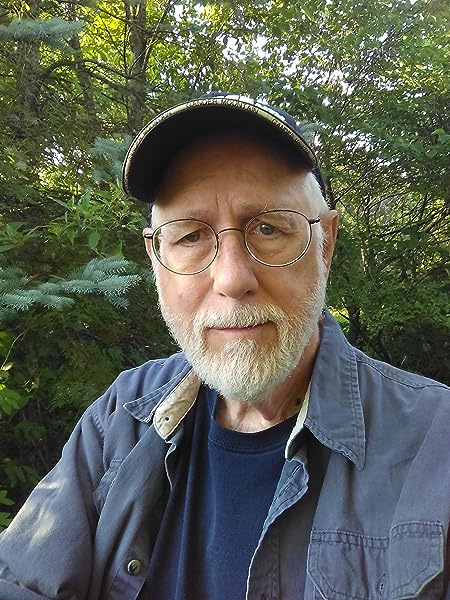 The Banyan Deer: A Parable of Courage and Compassion Kindle Edition

A sweet and sensitive story of courage, sacrifice and kindness.--Dan Millman, author of The Way of the Peaceful Warrior

The narrative of a deer king who lays his life on the line not only for his own people but for all creatures, this story is a tale for all ages, with many subtleties layered beneath its surface. Though this is originally a Buddhist story, the text does well regardless of belief system (or lack thereof). The Banyan Deer is a welcome addition to any collection.--Elephant Journal

The Banyan Deer by Rafe Martin, a gifted storyteller and award-winning author, is the ultimate story of courage and compassion... In less capable hands, this story is instructive but hardly riveting, but in Martin's it's a page-turner.--Tynette Deveaux, Good Reads for Little Buddhas, Shambhala Sun

The Banyan Deer shows that the lives of all living beings are equally important.--His Holiness the Seventeenth Karmapa, Ogyen Trinley Dorje --This text refers to the hardcover edition.

Award-winning illustrator Richard Wehrman was born in St. Louis and attended the Washington University school of fine arts. His paintings have been exhibited at the Saint Louis Art Museum, the St. Louis Artists' Guild, and Washington University. He was chosen as Rochester's Communicator of the Year for illustration and has received a gold medal from the Society of Illustrators. Richard serves on the board of directors of the Heartwork Institute and lives in Upstate New York. --This text refers to the hardcover edition.

5.0 out of 5 stars Five Stars
Reviewed in India on 27 June 2015
Verified Purchase
Beautiful. Such nobility and compassion as to choke you up as you're reading it aloud to your child.
Read more
Report abuse

A. Carey
5.0 out of 5 stars Great moral, engaging story for kids and adults.
Reviewed in the United States on 1 June 2018
Verified Purchase
Great book, great story. This is an engaging read for children and adults. It gave my daughter lots of good, important stuff to think about.
Read more
One person found this helpful
Report abuse

sheep107
5.0 out of 5 stars Please Don't Eat Me
Reviewed in the United States on 24 July 2017
Verified Purchase
This is a wonderful book, a very nicely told story about animals desiring not to be eaten.
Read more
One person found this helpful
Report abuse

Katie Coones
4.0 out of 5 stars Oh Deer!
Reviewed in the United States on 26 January 2017
Verified Purchase
I wanted to find out what a storyteller/folktale writer would say about deer. My middle reader children' book will be quite different in theme and "understated message"
Read more
Report abuse

Brenda-the-Brit
5.0 out of 5 stars A Moral for Us All
Reviewed in the United States on 25 December 2014
Verified Purchase
Beautiful little story of community, courage and caring that us kids understand, with friend Richard's delicate drawings to lead us on from page to page.
What a gift! Thank you again.
Read more
One person found this helpful
Report abuse
See all reviews
Back to top
Get to Know Us
Make Money with Us
Let Us Help You
And don't forget:
© 1996-2021, Amazon.com, Inc. or its affiliates