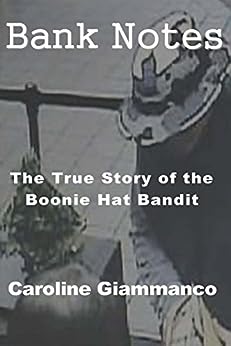 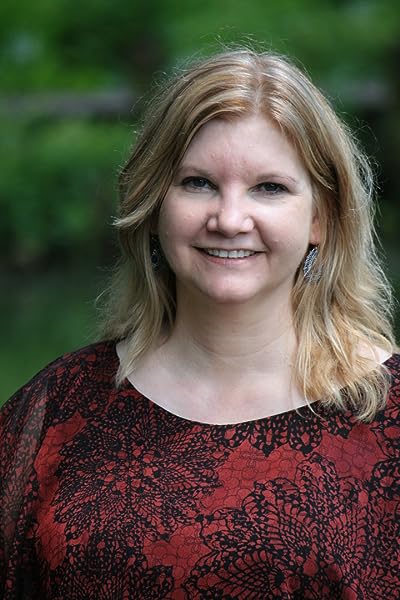 Jeanie
5.0 out of 5 stars Hope he is paroled early!
Reviewed in Australia on 30 March 2016
You can't get any better than a true bank robbing/true love story...and it does not have an ending!! Love prevails. I sure hope Keith gets out early so they can really have happiness before it is too late. To reform!
— CJ Loiacono

Stephanie Parker McKean
4.0 out of 5 stars Why Read This Book? Lots of Reasons
Reviewed in the United Kingdom on 13 January 2016
Verified Purchase
Why read “Bank Notes” by Caroline Giammanco? It is an amazing love story, a recap of a bank robbing spree by Missouri’s “Boonie Hat Bandit,” and a detailed in-depth look at why prison reform is needed and how it can be accomplished.
As Caroline points out so poignantly, it is easy for those outside impenetrable prison walls to forget the thousands of humans incarcerated inside. It is even easier to be indifferent and apathetical with the easy excuse that the “bad guys” are inside and the “good guys” are outside.
Boonie Hat Bandit Keith Giammanco takes full responsibility and blame for the twelve bank robberies that put him behind those walls. He was polite, non-violent, and unarmed. He was also a broke single parent providing for two daughters.
What Caroline and Keith want people who read “Bank Notes” to realize is that miscarriages of justice exist: the rich can buy their way out of the prison system, but the poor who are unable to afford their own attorneys are put on an assembly line to incarceration. After all; state-provided defense attorneys for those who can’t afford to hire their own attorney get their paychecks from the same source as do the prosecutors, are friends with the prosecutors, and sometimes even share the same office space.
In Keith’s case, his Constitutional rights were violated. He was tried twice for the same crime and he was denied access to a speedy trial because the State of Missouri was determined to add to his sentence after he was convicted and sentenced in federal court.
Bank Notes is an incredible and incredibly true account of what it is like behind prison walls, how some people get there, and why they are destined to stay – regardless, sometimes, of guilt or innocence.
For anyone who reads Bank Notes and feels compelled to join the push for prison reform, Caroline provides links and ideas, as well as a recap of her legislative fight for reform.
Read more
Report abuse

Mary Raynor
5.0 out of 5 stars DON'T TRUST YOUR SOUL TO NO BACKWOODS SOUTHERN LAWYER...
Reviewed in the United States on 28 November 2015
Verified Purchase
I was trepidatious about reading this book, as stories of life in prison have always scared me. What Mr. Giammanco endures in the prison situation is just as I always imagined it, only worse. Mr. Giammanco has suffered at the hands of his lawyers and judges, who cared nothing about him. One lawyer was bent on getting him the toughest sentence he could get, since he used to be a prosecutor. And this was a lawyer who was supposed to be helping the defendant! The jury also seems to have been coached to give a harsh verdict. Mr. Giammanco readily admitted his crimes, explained why he committed them, and showed great remorse. He even admitted to associating with people far above his own station in life, which was the contributing factor in his commission of the crimes, and he readily admits to the pride which inspired them. The conditions in the jails and prisons are inhumane and appalling. Not much attempt is made at rehabilitation of the incarcerated. What pushes all of this over the top is that Mr. Giammanco is being punished for the same crimes twice -- first by the federal government and second by the state. There is a definite need for prison reform; what it comes right down to is that nobody really cares, and the present system is costing taxpayers money. The lyrics to the 70's song, "The Night the Lights Went Out in Georgia," kept running through my mind as I was reading this: "Don't trust your soul to no backwoods southern lawyer." If you're going to commit a crime in this country, especially in Missouri, make sure you have money to pay for your own lawyer -- one who will be on your side. That's all I have to say. I thoroughly recommend this book, I gave it five stars, and I hope everybody reads it.
Read more
3 people found this helpful
Report abuse

Bernard Gwertzman
4.0 out of 5 stars A Good Read to Understand Penal Systems
Reviewed in the United States on 16 June 2017
Verified Purchase
As a former reporter and editor, I found myself totally ignorant of the U.S. prison system. And of course, being a New Yorker, I had no idea of the special problems in the Missouri system where the protagonist of Ms. Giammanco's book, "Bank Notes" has had to endure being tried and penalized for the same crimes---an officially sanctioned double jeopardy. The book does a good job of telling us the background to Keith's 12 bank robberies, and the difficulties he faced in the prison system. It also has a love story included, how Carol, who taught a class in Keith's prison met and fell in love with him also had to endure discrimination until she quit. They are currently separated, and in a note to me, she says he still has eight and a half years to serve. But they plan to get married this October. She took his name before the marriage, as a sign of their togetherness.
Read more
One person found this helpful
Report abuse

Emilio Corsetti III
4.0 out of 5 stars Everything wrong about the criminal justice system
Reviewed in the United States on 22 June 2016
Verified Purchase
I was living in the St. Louis metropolitan area when this story first broke. I followed the case from the first bank robbery to Keith's capture. As details about Keith and his possible motivations for what he did began to emerge, I found myself fascinated by the story that unfolded. The string of bank robberies occurred in 2008 at the beginning of the last recession. Keith wasn't some ruthless criminal; he was a single father of two teenage twin daughters. He had no criminal history. What circumstances would make an individual take such drastic measures? What would happen to his daughters? What sentence would he receive? How would he deal with the repercussions of his crime? I was so interested in the answers to those questions that I contacted Keith Giammanco and offered him money for the rights to his story. When I told my wife that I was thinking about writing a book about the Boonie Hat Bandit, she thought I was crazy.

As it turns out, Keith never responded, and I eventually found another story to write. Wanting to get reviews and advance orders for my upcoming book before its release, I advertised in some different publications marketed towards the book industry. While reviewing my ad in one of those publications, I spotted a book with the title Bank Notes: The True Story of the Boonie Hat Bandit. I purchased the Kindle version that day (just $2.99).

Keith's ultimate sentence far outweighs the crime. He didn't use a weapon. He never threatened a teller. He was a first time offender. His lawyers wanted him to agree to a twenty-year sentence after he had already received a six-year sentence in the federal court system. The whole mess was so confusing that I can't tell you how many years he received. But I believe that it's at least twenty-five years. Child molesters get less time. Convicted murderers get less time.

While incarcerated, Keith meets Caroline, a teacher who teaches at the prison. They eventually form a relationship, and the story takes a turn. Along the way, Keith and Caroline cover numerous topics such as prison overcrowding, mass incarceration, mandatory sentencing, rehabilitation or the lack of it, the importance of hope, prison relationships between inmates and staff, and the warped politics behind many of these issues.

At no time does Keith blame others for the poor decisions that led to his incarceration. He takes full responsibility. He has paid greatly for those mistakes. His daughters have paid greatly. This book is an unflinching look at why we need reforms in the criminal justice system. Caroline is working tirelessly at getting legislation passed to reduce the time inmates must serve of their sentence – currently 85%. Some will say that she is doing this for selfish reasons. Some will argue that this book was written for financial gain and that Keith deserves his sentence and should not benefit in any way. I am on Keith's side in this battle. He has exposed the ugly truth.
Read more
One person found this helpful
Report abuse

Valerie Smith
5.0 out of 5 stars Highly recommend this well written story
Reviewed in the United States on 10 May 2017
Verified Purchase
I found this book to be well written and at times hard to read because of the difficulties this man suffered from the Justice system and the prison system. Everyone makes bad decisions at times during his or her lifetime, he just made a HUGE one. The story of how he and Caroline met and fell in love is powerful and makes me hopeful that in the end love with win out. No matter what! I know first hand how challenging loving an inmate can be, how lonely, and isolating it is, but when you love someone, you love for better or worse. The heart wants what the heart wants. Loving an inmate wasn't a decision I made and loving this man wasn't a choice at all! Sometimes even when you don't want to love or care for someone it's beyond your control. Caroline told Keith's story of how a good decent man can have it all, fall on hard times, and make poor choices out of desperation but still be that good, loving, caring person. I liked this book but it was difficult reading about all the injustice that are in our prisons and Justice system and how really broken it all is. Caroline is trying to change things for the better, and for that, I respect and commend her. She is a fierce and committed woman. Keith is a lucky and blessed man to have her in his corner. Well done Caroline!
Read more
2 people found this helpful
Report abuse
See all reviews
Back to top
Get to Know Us
Make Money with Us
Let Us Help You
And don't forget:
© 1996-2021, Amazon.com, Inc. or its affiliates