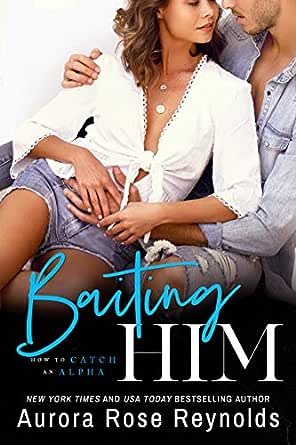 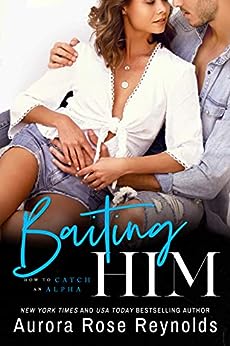 Baiting Him (How to Catch an Alpha Book 2) Kindle Edition

From New York Times bestselling author Aurora Rose Reynolds comes the second book in the steamy, witty, and hilarious How to Catch an Alpha series.

Chrissie doesn’t have time for guys, hot or otherwise; most days, she barely has time to sleep. With a thriving bakery that demands her attention and plenty of proof that relationships aren’t worth the trouble, she’s content to go it alone. Too bad she’s unwittingly baited Mr. Tall, Dark, and Way Too Gorgeous—and he’s just waiting for a chance to bite.

Gaston is used to getting what he wants, but he also knows nothing good ever comes easy. From the moment he meets Chrissie, he realizes that this woman who makes him laugh, smells like cupcakes, and looks like a tasty snack is going to be his greatest challenge. And if he’s lucky, she’ll be his biggest reward.

But someone else wants to catch Gaston at all costs—even if it means endangering the lives of the people he loves. Somehow Gaston must thwart danger and convince Chrissie that he’s the perfect catch.

Aurora Rose Reynolds is a New York Times and USA Today bestselling author whose wildly popular series include Until, Until Him, Until Her, and Underground Kings. Her writing career started as an attempt to get the outrageous alpha men in her head to leave her alone and has blossomed into an opportunity to share her stories with readers all over the world.

Anastasia
5.0 out of 5 stars Loved this book soooo much
16 January 2020
Format: Kindle EditionVerified Purchase
Aurora Rose Reynolds has done it again, she never disappoints and her books keep getting better. This is the second book in the series and can be read standalone but I wouldn’t because they are both as beautiful as each other. You get to meet Chrissie and get to know her more. If you had read the first book you would know her as Leahs best friend. she meets club owner Gaston while she uses the men’s toilet and from that instant the chemistry is oozing out of the pagers. They both feel it but it is up to Gaston to prove that he isn’t just any other man but the man for her. I absolutely loved it and I knew that I wouldn’t be able to put it down which I didn’t. if you want a fast passed, insta love and heart melting story this is it. Five stars plus.
Read more
Helpful
Comment Report abuse

Zoe Asta
TOP 500 REVIEWER
5.0 out of 5 stars Baiting for the Catch
14 January 2020
Format: Kindle EditionVerified Purchase
I absolutely loved Baiting Him there was just so much depth in this book, This is definitely the quality you expect from this author. She knows how to pull at your heart strings and make you connect with the charecters. I struggled putting this book down and I just wanted more as the people in this book became more than just charecters on paper. I honestly hope everyone loves this book as much as I have. Happy Reading ♡
Read more
Helpful
Comment Report abuse

wow
1.0 out of 5 stars Boring
16 January 2020
Format: Kindle EditionVerified Purchase
Man, lately i have been so dissapointed with her books. This was just boring.
Read more
One person found this helpful
Helpful
Comment Report abuse

Readers Retreats
TOP 500 REVIEWER
4.0 out of 5 stars Perfect Aurora Rose Reynolds
15 January 2020
Format: Kindle Edition
I am really struggling on how to review this book. I feel like just the fact Aurora Rose Reynolds wrote it should be enough said. But I guess I mean Aurora is one of my top auto buy authors and I love her writing. I love going in knowing the type of hero I'm going to get. And knowing I am going to be happy with the outcome.

Chrissie was sweet and loving and I was a big fan of hers from the start. She knew who she was and what she wanted and I liked that when she first met Gaston she didn't fall all over herself to get his attention.

Gaston was everything I love about the author. He is sexy but not a manwhore, driven but doesn't put his work before his friends and family. But mostly he knows who he wants and goes all out to win her over and convince her she's it for him.

Together they were so cute and the chemistry was scorching hot. Their relationship developed quickly but it still felt natural and I was right there the whole time with them. There was really minimal drama and the whole book was just one big warm fuzzy.

A great read for a lazy afternoon

Wiley Kate (Kylee)
5.0 out of 5 stars Sweet like candy
14 January 2020
Format: Kindle Edition
Baiting Him is one of those stories that will melt your heart and have you grinning the whole time. Gaston and Chrissie are two characters that will find their way deep under your skin, their story will have you overflowing with happiness and they will show you what true love is. A story that is passionate, endearing, heartfelt and enchanting. Their journey might at times be sweet like candy but believe me it has enough heat and passion to warm you from head to toe. It won’t be just Chrissie and Gaston falling in love, you will fall right along with them.
Read more
Helpful
Comment Report abuse

Alison
5.0 out of 5 stars Awesome
16 January 2020
Format: Kindle Edition
I am loving this new series by Aurora Rose Reynolds where you just adore two people meant to be, coming together & your just along for the ride- awesome!!
Read more
Helpful
Comment Report abuse

Go to Amazon.com to see all 184 reviews 4.5 out of 5 stars
Get FREE delivery with Amazon Prime
Prime members enjoy FREE Delivery and exclusive access to movies, TV shows, music, Kindle e-books, Twitch Prime, and more.
> Get Started
Back to top
Get to Know Us
Make Money with Us
Let Us Help You
And don't forget:
© 1996-2020, Amazon.com, Inc. or its affiliates