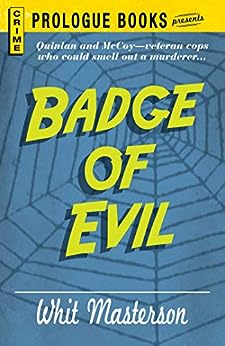 Whit Masterson is a pen name for a partnership of two authors, Robert Allison "Bob" Wade (1920-2012) and H. Bill Miller (1920-61). The two also wrote under several other pseudonyms, including Wade Miller and Will Daemer. Together they wrote more than thirty novels, several of which were adapted for film. Most famously, their novel Badge of Evil was adapted into the Orson Welles film Touch of Evil. --This text refers to the paperback edition.

M. Dowden
5.0 out of 5 stars Touch of Evil
Reviewed in the United Kingdom on 18 May 2012
Verified Purchase
You may have heard of this book before, but even if you haven't you will recognise the basic story line. This was the basis and inspiration for Orson Welles' film noir classic  Touch of Evil [DVD ]. Although Welles played about with the story, the main plot remains more or less the same as the book. Whit Masterson was actually a pseudonym for authors Robert A Wade and H B Miller, who collaborated on this and other books.

When prominent businessman Rudy Linneker is blown up at his home the police are under pressure to make a quick arrest. After ten days and no leads, with the Press all over them, the District Attorney makes his assistant, Mitchell Holt a 'special investigator', and the police call in the help of retired policeman, Captain McCoy. McCoy makes a quick arrest, but oddly Mitch makes an arrest also, for the same crime, his being the correct culprit. Things don't seem to add up, and Mitch thinks that perhaps the police were a bit over zealous and may have tried to frame someone for the crime.

As the tension builds, Mitch finds himself and his family in danger, as well as the chance of losing his job. How far up does frame ups go, how long have they been going on, and how many people have been convicted on false evidence? Mitch is determined to get to the bottom of it all, but will he get any help? Even if he is right that something is going on, the aftermath could be very damaging for the law enforcement authorities as a whole.

Straight from the start you are thrown into the action, and this story doesn't let up as you proceed. With convictions being quashed today with 'unsafe' evidence this story is still as relevant as when it was first published. All in all this is a great read that would have made a perfectly good film even if Orson Welles had transferred it straight to screen as it is.

jw
3.0 out of 5 stars A classic story but outdated
Reviewed in the United Kingdom on 20 May 2012
Verified Purchase
Writing has moved on a lot from the 1950s - and not necessarily all of the so-called progress is good.

However, whilst I acknowledge that this was a classic on its day, I found it quite predictable in parts, with occasional leaps of faith required to hold it together.
Read more
Report abuse

Guido Heitkoetter
4.0 out of 5 stars crime the old way
Reviewed in Germany on 7 May 2013
Verified Purchase
a criminal history from the time before cell phones, computers and internet. this book offers great story telling and interesting characters, that we don't find too often in modern criminal stories.
Read more
Report abuse

Judith
4.0 out of 5 stars Among The Best of 1950's Pulp Mysteries
Reviewed in the United States on 15 May 2012
Verified Purchase
I really want to give this 1956 pulp mystery 5 stars, but will stick to my resolve to award the ultimate rating to the equals of John le Carré's The Spy Who Came In From the Cold or Josephine Tey's The Daughter of Time. As 1950's pulp fiction, Badge of Evil is as good as it gets. The work of writing team Bob Wade and Bill Miller, who wrote 33 novels between 1946 and Mr. Miller's death in 1961, this fast paced, tightly plotted mystery is set in southern California.

A prominent businessman is murdered and Assistant District Attorney Mitchell Holt is appointed as special investigator by his boss. He reluctantly accepts the assignment. Holt differs from the hard-boiled detective of many pulp mysteries. He is a happily married family man who sees himself as an attorney, not an investigator. He is thoughtful and driven to do the right thing. Soon he and his family are threatened. The dialogue and excellent writing are a joy which I will not spoil by describing any more of the plot. Pulp mysteries are traditionally around 160 printed pages and are a fairly quick read.

A particular pleasure is the presentation of the book by Prologue. I used the crisp Publisher Font and appreciate the perfect formatting and editing. After reading Badge of Evil, I purchased copies of some original pulp first editions I own but, alas, can no longer read the tiny print. My thanks to Prologue Books.
Read more
18 people found this helpful
Report abuse
See all reviews
Back to top
Get to Know Us
Make Money with Us
Let Us Help You
And don't forget:
© 1996-2021, Amazon.com, Inc. or its affiliates