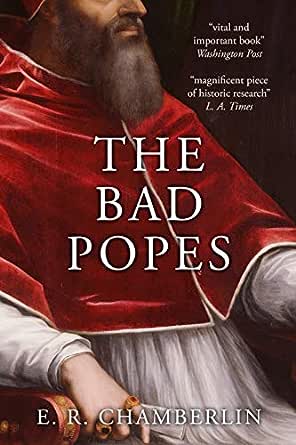 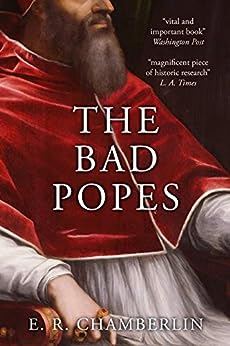 Eric Russell Chamberlain was born in 1927 and is the author of over thirty books, many of them translated, on European history, culture and travel. He has also written television series on historical conservation. He has been awarded the Regione Sicilia Travel Writing Award and was awarded an honorary degree by the University of Surrey. He has written widely. --This text refers to the paperback edition.

Roy Bainton
4.0 out of 5 stars Distilled Roguery
Reviewed in the United Kingdom on 21 July 2017
Verified Purchase
The bad popes of history are scattered throughout Vatican history (and there were some real stinkers) so the great thing about Chamberlain's book is that he gathers these hypocrites and villains together. For a fuller picture, you would need John Julius Norwich's 'The Popes', but 'The Bad Popes' is a well-written distillation of all the rogues and includes a good overview of that grubby Vatican period known suitable as 'The Pornocracy'. A good read and indispensable if you're prepared to be magnanimous in your acceptance of Papal history.
Read more
One person found this helpful
Helpful
Sending feedback...
Thank you for your feedback.
Sorry, we failed to record your vote. Please try again
Report abuse

columba
5.0 out of 5 stars An enlighteneing read
Reviewed in the United Kingdom on 9 November 2012
Verified Purchase
Very helpful book for those interested in the history of the Cathoilc Church and the papacy. With a mountain of detail and insight, the author has exposed the often corrupt human element within the Church while, without effort, reinforcing the divine element without which the Church could not have possibly existed for over 2,000 years.

This book has the potential for testing the faith of the lukewarm while inspiring the faith of true believers.
Read more
2 people found this helpful
Helpful
Sending feedback...
Thank you for your feedback.
Sorry, we failed to record your vote. Please try again
Report abuse

arpeggio
5.0 out of 5 stars Excellent. Good historical overview
Reviewed in the United Kingdom on 4 July 2016
Verified Purchase
Excellent. Good historical overview. A topic which had the potential to be rather dry is treated in an entertaining but scholarly manner, with many pithy turns of phrase.
Read more
Helpful
Sending feedback...
Thank you for your feedback.
Sorry, we failed to record your vote. Please try again
Report abuse

MichaelR
5.0 out of 5 stars Entertaining and very informative history
Reviewed in the United Kingdom on 30 September 2005
Verified Purchase
Chamberlin's "Bad Popes" is a very readable and entertaining account of one of the most colourful areas of medieval history. The attention to detail and the range of sources if very impressive and helps to create a very solid and rich narrative.
I would thoroughly recommend this book to any reader. It provides fascinating insights into the workings of the Italian city states, the Holy Roman Empire and the Roman Catholic church over 600 years while telling the astonishing and thrilling personal stories of some of the most extraordinary characters in European history.
Read more
13 people found this helpful
Helpful
Sending feedback...
Thank you for your feedback.
Sorry, we failed to record your vote. Please try again
Report abuse

M. Schweiger
5.0 out of 5 stars Most entertaining
Reviewed in Germany on 19 September 2012
Verified Purchase
Not every pope was a saint - that's the bottom line of E. R. Chamberlin's narrative `Bad Popes' in which he describes the (many) vices and (few) virtues of an eclectic choice of Christ's vicars on earth.

The book starts with the stories of the pernicious family of the Theophylacts, Theodora and her daughter (senatrix) Marozia as well as pope John XII (955 - 963) who struggled with Otto of Saxony, Gregory of Tusculum opposing Otto III and two of his sons and one of his grandsons later successively appointed popes, culminating in Benedict the IX selling the papacy to his uncle Giovanni Gratiano (Gregory VI).

The highlight of `Bad Popes' are certainly the Renaissance popes: the splendid and prodigal Rodrigo Borgia (Alexander VI, 1492 - 1503) purchasing the votes of the cardinals and not shying away from any deeds or misdeeds to further his dynasty and family, Giovanni de' Medici (Leo X, 1513 - 1521), a worthy successor of Alexander VI, whose shameless sale of indulgences made Martin Luther post his 95 theses and the politically inept and pusillanimous Giuglio de' Medici (Clement VII, 1523 - 1534) who so often changes his allegiances between Francis I of France and Charles V of Spain that Rome got sacked by German landsknechts in 1527.

chcjrbone
5.0 out of 5 stars Nothing spiritual about the papacy
Reviewed in the United States on 12 January 2007
Verified Purchase
The popes covered in this book showed virtually no interest in spiritual matters but a great deal of interest in power, wealth, and carnal pleasures. A term that appears over and over again is simony: the act of buying or selling ecclesiastical preferment, ecclesiastical pardons, or other things regarded as sacred or spiritual. The popes routinely sold membership in the cardinalate as a means of raising cash. In order to maintain a family's position in the College of Cardinals, the pope would sometimes appoint teenage boys from his extended family. During this period, the pope could marry and have children which he then attempted to ensure would succeed him to the pontificate. Some popes had numerous illegitimate children who under normal circumstances would be outcasts, but the pope could issue a decree legitimizing their birth.

Did you know that due to the utter ineptness of Pope Clement VII, Rome was sacked by the Catholic emperor Charles in 1527? The pillaging and rape ended only when the numerous dead bodies brought on the plague, which affected inhabitant and invader alike. In addition, the utter destruction of the country resulted in famine, and looters, laden with gold, were starving. They eventually left Rome to find food.

It's not hard to understand the appeal of Lutheranism after reading about the wild debauchery that was going on in Rome at that time.

Although the modern-day Catholic Church, still one of the richest institutions around, has cleaned up its act in comparison to what it was doing for centuries, this well-written book reminds us that there is nothing spiritual about that institution.
Read more
14 people found this helpful
Helpful
Sending feedback...
Thank you for your feedback.
Sorry, we failed to record your vote. Please try again
Report abuse
Load more international reviews

Varner
5.0 out of 5 stars Five Stars
Reviewed in the United States on 8 November 2015
Verified Purchase
Excellent -- very wordy but tons covered and some remarkable tales and tribulations!
Read more
3 people found this helpful
Helpful
Sending feedback...
Thank you for your feedback.
Sorry, we failed to record your vote. Please try again
Report abuse

Xseller
4.0 out of 5 stars Often Hysterical
Reviewed in the United States on 12 April 2013
Verified Purchase
It is an excellent and well researched treatise on the lineage of the "bad" popes and a lot about the clandestine attitude of many popes
Read more
3 people found this helpful
Helpful
Sending feedback...
Thank you for your feedback.
Sorry, we failed to record your vote. Please try again
Report abuse

ZWXXYZ
5.0 out of 5 stars We have another bad pope.
Reviewed in the United States on 22 November 2016
Verified Purchase
If you are a Catholic and love Jesus, the faith and the Church, you should read this book. There have been bad popes. Catholics need not be afraid of history and don't have to pretend every pope was a good man. If you say Catholics must act as if every pope was/is great, Protestants will remain protestant. This book is fascinating history about bad popes and bad times in the Church.

The current pope is a jackass heretic. As they say in the Army, "If you can't respect the man, respect the rank". Francis is the pope, he is still a jackass. If someone tells you we must pretend Francis is a good pope, tell that someone about the popes in this book. Living through times of bad popes is not fun and not easy. The best way to live through a time of a bad pope is to be a better Christian. This book wil give you confidence. The Church survived bad popes in the past. The Church will survive this pope.