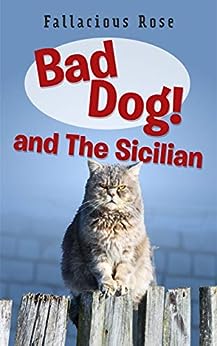 by Fallacious Rose (Author) Format: Kindle Edition
See all formats and editions
Sorry, there was a problem loading this page. Try again.

What has big yellow eyes, a nasty scar, and makes you an offer you can't refuse?

Life is all cowpats and kibble for canine badass Houdini. He's just escaped a fate worse than death, moved to a nice new home in the country, and to top it all off, there's a garbage dump just up the road!

But all that changes when The Sicilian comes prowling over the garden fence. The Queen of the neighborhood feral cats, she rules with an iron paw. If Houdini knows what's good for him, he'll hand over the fee for 'protection' and leave well enough alone. Houdini, of course, has other ideas.

Meanwhile, Houdini's owner Tess faces social ruin. Her dad's signed up to busk at the local Show - and he's the most embarrassing singer in the world! Pity she's the only one who seems to realise it...

If you love dogs and cats, you'll fall in love with The Sicilian - feral though she is - and Houdini, the disobedient mutt with a heart of gold. For ages 8 and up.

Johnny Parker
5.0 out of 5 stars Perfect humour for dog and cat lovers
Reviewed in the United Kingdom on 30 September 2018
Verified Purchase
Lovely gentle well observed humour. Very easy to read and would be good for youngsters as well as adults. Having two dogs and two cats I can appreciate how well the author has captured the dog and cat mindsets.
Read more
Report abuse
See all reviews
Back to top
Get to Know Us
Make Money with Us
Let Us Help You
And don't forget:
© 1996-2022, Amazon.com, Inc. or its affiliates