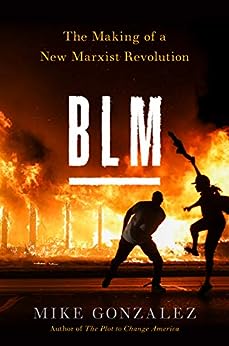 BLM: The Making of a New Marxist Revolution Kindle Edition

by Mike Gonzalez (Author) Format: Kindle Edition
See all formats and editions
Sorry, there was a problem loading this page. Try again.

The George Floyd riots that have precipitated great changes throughout American society were not spontaneous events. Americans did not suddenly rise up in righteous anger, take to the streets, and demand not just that police departments be defunded but that all the structures, institutions, and systems of the United States—all supposedly racist—be overhauled.

The 12,000 or so demonstrations and 633 related riots that followed Floyd’s death took organizational muscle. The movement’s grip on institutions from the classroom to the ballpark required ideological commitment. That muscle and commitment were provided by the various Black Lives Matter organizations.

This book examines who the BLM leaders are, delving into their backgrounds and exposing their agendas—something the media has so far refused to do. These people are shown to be avowed Marxists who say they want to dismantle our way of life. Along with their fellow activists, they make savvy use of social media to spread their message and organize marches, sit-ins, statue tumblings, and riots. In 2020 they seized upon the video showing George Floyd’s suffering as a pretext to unleash a nationwide insurgency.

Certainly, no person of good will could object to the proposition that “black lives matter” as much as any other human life. But Americans need to understand how their laudable moral concern is being exploited for purposes that a great many of them would not approve.

"Gonzalez takes on a movement that, with backing from every institution of elite culture, now has tentacles throughout American life, and is a threat to the very foundations of the country. This book is a necessary, urgent, and courageous critique."--Rich Lowry, editor of National Review

"Mike Gonzalez shows why Americans must take seriously the architects of Antifa, Black Lives Matter, and Critical Race Theory. He systematically reveals how these Marxists seek to transform America into something unimagined by the Founders and unrecognizable to most Americans today. His diagnosis of the threat is superbly argued and his wake-up call sorely needed." --Victor Davis Hanson, The Hoover Institution, Stanford University, and author of The Dying Citizen "Origins matter, and Mike Gonzalez has done yeoman work investigating and reporting on the origins of the BLM movement whose success has resulted in soaring crime rates and urban violence." --Michael Barone, senior political analyst, Washington Examiner "This is a must-read to make sense of the political turmoil of the past two years. In the narrative created by the media and academia, Black Lives Matter is a continuation of the civil rights movement, but Gonzalez makes it abundantly clear that BLM is not mainly about eliminating racism. Rather, it aims to overthrow the free-market system and the American constitutional way of government. With careful research and a deep understanding of American history, Gonzalez has written a tour de force."--Kim Holmes, former Assistant Secretary of State and Executive Vice President of The Heritage Foundation "Mike Gonzalez is a rare combination: brilliant enough to articulate fundamental problems and brave enough to name them. Black Lives Matter is a movement predicated on prevarication, and Gonzalez breaks down its dangerous falsehoods in hard-hitting fashion. --Ben Shapiro, host of The Ben Shapiro Show and author of How to Destroy America in Three Easy Steps "Gonzalez provides a masterful chronicle of the intellectual origins of Black Lives Matter and the radical, Marxist ideology that underpins the movement. This is a must read for patriots who wish to understand and fight back against BLM's effort to tear down America's most fundamental principles and institutions."--Ying Ma, author of Chinese Girl in the Ghetto --This text refers to the hardcover edition.

Mike Gonzalez is a senior fellow at The Heritage Foundation's Allison Center for Foreign Policy in Washington, D.C. He spent close to twenty years as a journalist, fifteen of them writing from Europe, Asia, and Latin America. He left journalism to join the Bush administration, serving as a speechwriter for Christopher Cox, chairman of the Securities and Exchange Commission, before moving on to the State Department's European Bureau, where he wrote speeches and op-eds. Since 2009 he has been at The Heritage Foundation, now writing on critical race theory, national identity, diversity, multiculturalism, assimilation, and nationalism, as well as foreign policy in general.

If you have any suspicion about the TRUE agenda of BLM, Antifa, the now Commie-Democratic party, and the AOC-lead Squad, this book provides the facts.

America is truly at a crossroads. And like the Russian people in 1917, we are being lied to by these Progressives, New Democrats, and the openly Marxist BLM. They are all a small group of Neo-Marxists who seek to overthrow the US Government, steal our liberties, and dictate their political religion to us.

We must fight back.

MTM
5.0 out of 5 stars Good look inside BLM!
Reviewed in the United States on 24 September 2021
Verified Purchase
Definitely recommend this book! Gives good insight into BLM and their true agenda. I saw BLM and the propaganda around it for what it was, violent, dangerous, racist, and does nothing to improve the lives of black people. Check this book out!
Read more
28 people found this helpful
Report abuse

MG
3.0 out of 5 stars Read carefully. There is quite a bit of deceit mixed with truth in this book.
Reviewed in the United States on 2 October 2021
Verified Purchase
I cannot tell if the deceit is intentional or if it is simply profound bias, but the author of this book makes a lot deceitful statements in just the first chapter alone. I will finish the book, but it will be with a lot of fact checking and examination of context. Is the author a liar or just incredibly biased? Can't say, yet. But I'll try to check in after completing the book.
Read more
17 people found this helpful
Report abuse

John E. Greenbacker, Jr.
5.0 out of 5 stars A very important book.
Reviewed in the United States on 4 November 2021
Verified Purchase
This combination history and exposure of Black Lives Matter is by far the most revealing book I've read this year. It starts with an account of the many attempts made by Communists allied with the old
Soviet Union to infiltrate and dominate Black advancement movements, starting with Marcus Garvey's Pan-Africa organization through Martin Luther King Jr.'s Southern Christian Leadership Conference.
Before BLM, the closest they came to domination of an influential black organization was the Student Non-violent Coordinating Committee during its violent Stokely Carmichael/Rap Brown years.
BLM, through careful subterfuge and dissimulation, the assistance of academic leftists and a compromised media, has gained tremendous influence over national affairs, to the point that it insisted that the Biden administration issue executive orders promulgating Marxist curricula in K through12 public education and purge unreliable personnel in the military and the Federal civil service. The three avowedly Marxist organizers of BLM want nothing short of an abandonment of traditional Western values and Enlightenment reasoning. They start with the destruction of the traditional family unit. They believe that like young Red Guards, children need no parents, only the state. Author Mike Gonzales traces these ideas back to the Marxists of the 1920s Frankfurt School of Communism, many of whom fled Hitler's
Germany and wound up as tenured faculty in the Columbia University School of Education (which granted a PhD to Obama's Communist friend and former Weatherman Bill Ayers.) In short, this book is a chilling wake-up call to all those who worry about our great democracy.
Read more
3 people found this helpful
Report abuse

Mike
5.0 out of 5 stars Just the Facts
Reviewed in the United States on 20 November 2021
Verified Purchase
The author tells our nation's history like it was, unapologetically -- the good, bad, and ugly. He also draws a clear and compelling line between the goals of Marxism and the classist, anti-capitalist, tribalism stoked by the left. It's hard to accept it as the way it is, but he brings the receipts!
Read more
One person found this helpful
Report abuse
See all reviews
Back to top
Get to Know Us
Make Money with Us
Let Us Help You
And don't forget:
© 1996-2021, Amazon.com, Inc. or its affiliates