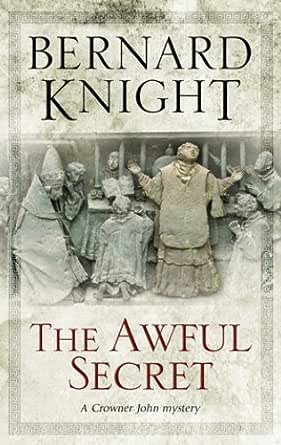 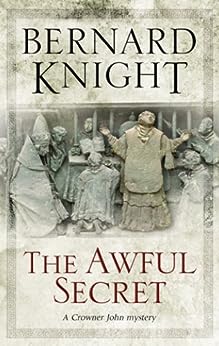 Gilbert de Rideford is a Knight of the Temple of Solomon, and an old acquaintance from Crowner John's crusading days. He claims to have come into possession of a secret that could shake Christendom to its foundations - and he desperately needs John's help to escape from the secretive order of warrior monks. Suddenly swept into a world of religious intrigue and dangerous politics, Crowner John finds himself undertaking a life-threatening mission to the Island of Lundy - inhabited solely by notorious pirates - until finally the awful secret itself is revealed.

Professor Bernard Knight, CBE, became a Home Office Pathologist in 1965 and was appointed Professor of Forensic Pathology, University of Wales College of Medicine, in 1980. During his 40-year career with the Home Office, he performed over 25,000 autopsies, and was involved in many high profile cases, including that of Fred and Rose West, and the child killer, Mary Bell. The author of numerous popular and academic non-fiction books, he has written thirteen novels in the Crowner John mystery series. Professor Knight lives in Cardiff.
click to open popover

P. Kidd
4.0 out of 5 stars Richly drawn characters.
29 October 2018 - Published on Amazon.com
Verified Purchase
Another well written, intelligent story in the series. Finely drawn, rich characters, especially the ancillary characters. I highly recommend this series for anyone that enjoys this genre.
Read more

Kaye McCall
2.0 out of 5 stars The Grinch Who Stole the Crowner
28 March 2015 - Published on Amazon.com
Verified Purchase
Just like the mean little kid in kindergarten who delights in telling all the other children that there is no Santa Claus, Bernard Knight just can't wait to spread an old Knights Templar story dispelling the divinity of Christ. I have written a rave review about this series of books by him, but this will be the last book of his I read. I am sick to my teeth of the anti-religion proselytizing of modern authors. His anti-religious baiting is even an anachronism to the era he depicts. His other facts are so well researched and presented, the lack of faith of Crowner John, who even risked his life to serve his King and Pope in the Crusades, was strangely at odds with the fervency of religion during medieval times. I was willing to put that discrepancy aside because of Knight's otherwise precise cultural and historical accuracy, especially regarding Norman law. I've had it, Mr. Knight. Thank you, very much, but I'll go back to my Matthew Shardlake series by C. J. Sansom--a series that features a justice of the law under Henry VIII. It is very well researched, like Mr. Knight, but it is better written, and isn't punctuated with author bias.
Read more
4 people found this helpful

Kathleen Ingram
4.0 out of 5 stars Very satisfying_
25 March 2015 - Published on Amazon.com
Verified Purchase
"Gilbert de Rideford is a Knight of the Temple of Solomon, and an old acquaintance from Crowner John's crusading days".

I love the series and trying to read them in order, this one was not quite as good as #1-3 and #15 but still very satisfying! John and his compatriots are very well developed and all have excellent historical detail!

normsky
5.0 out of 5 stars Five Stars
20 March 2018 - Published on Amazon.com
Verified Purchase
Just another great story i cannot wait for the next book.
Read more

Debra Crozier
4.0 out of 5 stars Great historical mystery series
26 January 2018 - Published on Amazon.com
Verified Purchase
good story & history
Read more
Go to Amazon.com to see all 23 reviews 4.0 out of 5 stars
Get FREE delivery with Amazon Prime
Prime members enjoy FREE Delivery and exclusive access to movies, TV shows, music, Kindle e-books, Twitch Prime, and more.
> Get Started
Back to top
Get to Know Us
Make Money with Us
Let Us Help You
And don't forget:
© 1996-2020, Amazon.com, Inc. or its affiliates