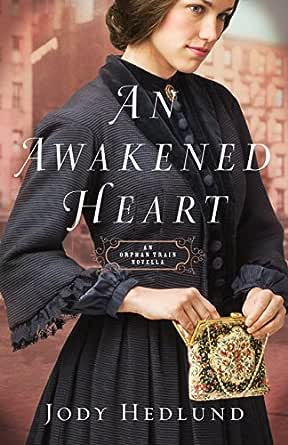 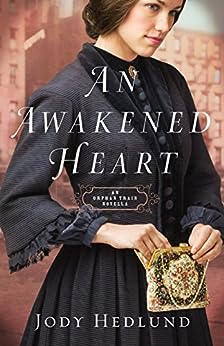 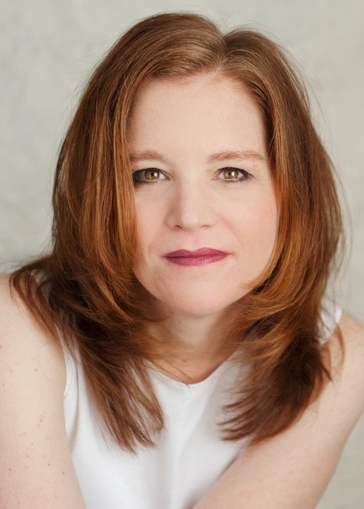 Trying to heal the ache she feels in her empty life, wealthy Christine Pendleton decides to volunteer at Centre Street Chapel. Ministering to one of the most deprived parts of New York City, the chapel aims at making a difference in the lives of the impoverished immigrants flooding the city. After seeing firsthand the hopelessness of the poor women and orphans, Christine is convinced more can be done to help them.

Guy Bedell has been serving at the chapel and pouring his heart out for the people he's grown to care about. When Christine begins to challenge his methods and offers a new vision for reaching out to the community, can he trust that perhaps God has bigger plans in store for him--plans that may include this feisty socialite?

Jody Hedlund writes inspirational historical romances for both adults and young adults. The winner of the 2016 Christian Book Award for fiction and the Christy Award for historical romance, she lives in central Michigan with her husband, five busy children, and five spoiled cats. When she's not penning another of her page-turning stories, she loves to spend time reading, especially when it also involves consuming coffee and chocolate.

Susan Hanfield is a three-time Audie award finalist and a 2016 Voice Arts award nominee. Classically trained, she has recorded over seventy titles in multiple genres, including young adult, historical fiction, faith-based inspirational, fantasy, paranormal romance, science fiction, classics, and nonfiction. In addition to recording audiobooks, she can be seen in film, on stage, and in commercials. For more information, visit her blog at susanhanfield.com/latest-from-susan.

D.L.R
TOP 500 REVIEWER
3.0 out of 5 stars An Awakened Heart
19 November 2019
Format: Kindle EditionVerified Purchase
Reverend Bedell runs a church and preachers to women who are selling them selfs for money. They are emigrants and work is scarcely available.

Miss Pendleton helps at the church passing out pamphlets and wants to help.
When one of the tours of a sweat shop where the conditions are horrible, the women make much less then men.

A family of five looses the mother from illness. They all live with a uncle who extorts money from the relatives. The remaining girls escape from the uncle.

I enjoyed reading what was here. Obviously it isn’t completely one story. Much left hanging for answers.

Tiffany Davy
4.0 out of 5 stars Moving
12 July 2017
Format: Kindle EditionVerified Purchase
Christine's mother has died and her father has left her a wealthy woman. She is moved by the dreadful plight of the tenement dwellers in the slums of New York. She joins forces with Reverend Bedell a poor widowed pastor who preaches to prostitutes in the tenements about their depraved ways. Of course Christine and the good reverend fall in love and find a way to care for and employ some of the desperate souls slaving in New York's sweatshops.
Read more
Helpful
Comment Report abuse

Kindle Customer
5.0 out of 5 stars Five Stars
29 July 2018
Format: Kindle EditionVerified Purchase
Currently one of my favourite authors. Have loved all the books in this series.
Read more
Helpful
Comment Report abuse

Ashleigh's granny
1.0 out of 5 stars Another bait and switch
10 April 2017 - Published on Amazon.com
Format: Kindle EditionVerified Purchase
Good storyline but it appears this book was written with the sole purpose of making you purchase the next book to find out what happens.
Every plot and subplot was left unfinished. I am so tired of an author who does this. If the first book is good enough, readers will purchase the next one. I refuse to read an authors' other works if they do this.
Read more
55 people found this helpful

The Voracious Reader
4.0 out of 5 stars No Ending!
22 April 2017 - Published on Amazon.com
Format: Kindle EditionVerified Purchase
Christine Pendleton has always felt unlovable. She comes from a wealthy family, but her parents treated her as a disappointment before they died. She’d spend the last years caring for her mother, and now at thirty, she’s a spinster with little hope of marriage. Yet, she feels God calling her to help the impoverished women in the slums of New York in 1857. And she tries not to give in to her growing feelings for the minister who also works with the poor and needy.

I fell in love with the characters in this novel. After reading several slow novels, this one read quickly and smoothly. However, it didn’t really have much of an ending. Although there wasn’t a cliffhanger, nothing was really settled, and the reader must buy the next book (which is in per-order, because it hasn’t released yet) to find out what happens. I hate this practice. It seems too deceitful and underhanded for Christian writers and publishers. I’m much more likely to buy the next book if I’m given a complete story on the first one. The story can continue, but no book should be left without an ending unless it tells the readers this upfront. However, everything else was so good that I couldn't bring myself to rate it too low, even though I agree with everything Ashleigh's granny says in her review.
Read more
15 people found this helpful

Red Apple Reader
5.0 out of 5 stars Outstanding. A+.
10 April 2017 - Published on Amazon.com
Format: Kindle EditionVerified Purchase
Powerful Christian historic romance set in Manhattan during the times of immigrant desperation in tenements (late 1850s). Ms. Hedlund captured believable characters who acted consistently, grew, developed, and believably fell in love (Christine and Guy are so perfect for each other and had me rooting for their success and happily ever after from the beginning). I had such enormous compassion for the German immigrant sisters, Elise who finds herself responsible for two younger sisters and two tiny, motherless children. The girls are desperate to get out of their uncle's dingy, dirty apartment in the immigrant tenement but discover the street is even worse. I loved how the stories converged and that the Christian elements weren't about Bible verses but were about how Christians actually live and respond to life's circumstances. So refreshing to see a minister who welcomes and thrills in the natural responses a man has for a woman, while remaining a clean read. Superbly written. Can't wait for the next installment in this series. I must preorder. It's THAT good.

Sensuality Level: Rated G to mild PG, depending on personal boundaries
Language: Rated G
Violence: Rated PG, and all is inherent to the story and living conditions in New York City, with the strong preying upon the weak
Read more
10 people found this helpful

R. Miller
4.0 out of 5 stars 4.2 stars: An Awakened Heart by Jody Hedlund
26 May 2017 - Published on Amazon.com
Format: Kindle EditionVerified Purchase
Free to direct her own life after her mother's death, Christine turns her attention to helping poor immigrants in NYC; she teams up with Rev Guy Bedell to visit tenements and eventually start a mission that provides decent jobs for ladies, including Elise and her sisters, who are left in untenable circumstances following their mother's death.

(Though reviews are inherently subjective, I prefer to provide some organization to my opinions through the use of a personal rubric. The following notes may contain spoilers.)

Plot and Setting: 4 -- Plot is engaging. Has unique elements and no major holes, but a few shaky bits and/or a slight lack of focus. Setting is clear and believable. Timeline may be a bit hard to follow. Though it's just a short novella, it actually includes two tangentially connected stories: Christine finding a new lease on life as she jumps boldly into ministry and charitable ventures, finding romance on the way; and Elise and her sisters facing a decaying living situation, ending up on the streets, and then being given shelter by Christine. It strikes a good balance most of the time, but doesn't end up feeling fully resolved. It's purpose is to introduce a new series, so I guess that's to be expected, but it's still a bit disappointing.

Characters: 4 -- Main characters are relatable, realistic, interesting, and dynamic. Some minor characters have depth, while others may be slightly stereotyped or simplified. Definite strong points in the relationships between characters. I admired Christine's willingness to give fully and self-sacrificially when she sees a need, Guy's openness to her ideas, and Elise's determination to lead her little family, even though it is unutterably hard. There's a whole range of human emotions in this short novella, and a whole range of human characters, from the depraved to the nearly saintly.

Mechanics and Writing: 4.3 -- A handful of typos, punctuation issues, or word errors. (<10/100 pgs) None of the errors seriously hinder understanding. Good use of POV. Generally skillful writing. Errors include: mild punctuation issues, a few awkward bits, and incorrectly calling the phrase "it’s more blessed to give than receive" a Beatitude. POV alternates between Christine and Elise, mostly, with a few sections of Guy.

Redeeming Value: 5 -- Well-developed, central, uplifting themes. Drugs, alcohol, violence, etc, are not glorified at all. No explicit sex scenes. Clear moral guidelines for behavior. It's a clean story, though we are also shown the darker, dehumanizing effects of poverty, including some women forced into prostitution to survive, and fear of being raped being the main reason Elise and her sisters leave their uncle's home. Christine and Guy work through a variety of opinions about how to best minister to the poor: is it a spiritual mission only, or is there room for also addressing their physical needs? The various perspectives have their points, but I appreciate where their conclusions end up: build relationships and extend the Gospel message, but also seek to meet the urgent needs of the poor, so that they may have the mental and emotional space to make spiritual decisions.

Personal Enjoyment: 3.5 -- I liked it a lot. It was enjoyable and entertaining. I wouldn’t mind re-reading it someday, but it’s not a priority.
Read more
2 people found this helpful
Go to Amazon.com to see all 198 reviews 4.6 out of 5 stars
Get FREE delivery with Amazon Prime
Prime members enjoy FREE Delivery and exclusive access to movies, TV shows, music, Kindle e-books, Twitch Prime, and more.
> Get Started
Back to top
Get to Know Us
Make Money with Us
Let Us Help You
And don't forget:
© 1996-2020, Amazon.com, Inc. or its affiliates