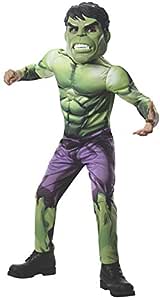 Hulk Smash! He's the green machine, muscle-bound and simply Incredible! After a lab accident involving gamma radiation, alter-ego Bruce banner finds himself turning into a huge green-skinned monster whenever he gets angry. Enter Hulk - one of the most popular Marvel Avengers. Originating from Marvel Comics, the Hulk has smashed his way into the Marvel Cinematic Universe with super strength. Played by Actors Mark Ruffalo, Eric Bana and Edward Norton, Hulk has appeared in many Marvel movies by Disney, including Hulk (2003), The Incredible Hulk (2008), The Avengers (2012), Iron man 3 (2013), Avengers: Age of Ultron (2015), Thor Ragnarok (2017) and Avengers: Infinity War (2018).

Lrod99
5.0 out of 5 stars Love it!
25 September 2017 - Published on Amazon.com
Verified Purchase
This is very well made! Great material for both the jumpsuit & mask & the mask fits nice & comfortable. Love it & so does my son. Fits great too. We got a small & my son is a size 5-6 being 6 years old.
Read more
4 people found this helpful

S. L. Meek
4.0 out of 5 stars Love it
11 November 2018 - Published on Amazon.com
Verified Purchase
My son is obsessed with Hulk. This costume worked great for Halloween and whenever he feels like getting turning green. It’s well put together so I don’t worry about it falling apart right away. I’m really happy with this purchase.
Read more

Darci W.
5.0 out of 5 stars Great Costume
14 March 2019 - Published on Amazon.com
Verified Purchase
I was a little hesitant to purchase this because of the price.
This was great quality and the fit was perfect.

Dana Sommers
4.0 out of 5 stars Standard Costume
21 November 2018 - Published on Amazon.com
Verified Purchase
Standard costume, slightly large on 4yr old 40# son. The bottom of the legs are wide so he could
wear his boots. Mask was way too large. Son loves it.

Read more
Go to Amazon.com to see all 15 reviews 4.5 out of 5 stars
Get FREE delivery with Amazon Prime
Prime members enjoy FREE Delivery and exclusive access to movies, TV shows, music, Kindle e-books, Twitch Prime, and more.
> Get Started
Back to top
Get to Know Us
Make Money with Us
Let Us Help You
And don't forget:
© 1996-2020, Amazon.com, Inc. or its affiliates