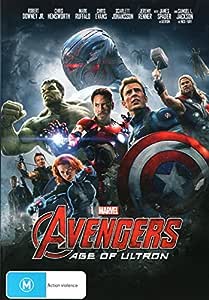 Written And Directed By

In an attempt to bring peace to the world Tony Stark aka Iron Man (Downey Jr) creates Ultron (voice of James Spader), a robot with artificial intelligence. However, instead of protecting humans, Ultron believes the only way to restore peace to Earth is to eliminate its citizens.

Antonio M Melendez
5.0 out of 5 stars Very Good
21 November 2019
Format: Blu-rayVerified Purchase
Very very good film, it flows well and it dose give you a look at the film all in all.
Read more
Helpful
Comment Report abuse

E. A. Solinas
TOP 50 REVIEWER
4.0 out of 5 stars There are no strings on me
27 February 2018
Format: DVD
The Avengers came together to save the Earth from being conquered. Now there's a new threat to the Earth that wants to tear them apart before it destroys the world.

And throughout "The Avengers: Age of Ultron," there is the feeling that the fragile bonds holding the team together are unraveling, and that this is one overwhelming threat they might not be able to take down. Joss Whedon fills the second Avengers movie with plenty of delightfully snarky dialogue ("Stark is a sickness!" "Aw, junior, you're gonna break your old man's heart") and rich character development, but at times it does feel a bit top-heavy in the action department.

After the team reclaims Loki's scepter from HYDRA, Tony Stark (Robert Downey Jr) has a (not) brilliant idea: use the scepter to create an artificial intelligence for worldwide "peace in our time," and don't tell anyone on the team except the reluctant Bruce Banner (Mark Ruffalo). The AI -- called Ultron (James Spader) -- does eventually come to life, but it's not the benevolent peacekeeper Tony envisioned. It's a cynical, hostile creation that bears more than a passing resemblance to Tony himself, and has a very twisted view of how to bring about world peace. It also has a personal hatred for the Avengers.

In mere hours, Ultron has loaded himself onto the Internet, and begun manufacturing bodies for himself using an old HYDRA lab. He's also acquired pair of minions -- young twins Pietro (Aaron Taylor-Johnson) and Wanda (Elizabeth Olsen) -- who have been given superpowers by HYDRA.

And since Wanda has the ability to warp minds -- including the Hulk's, causing him to rampage through an African city -- the Avengers soon find their resolve shaken, and their global reputation in tatters. Since Ultron has unlimited bodies, and is creating a new invincible cyborg one, the Avengers have no idea how they can stop him. Their only hope is to unleash an unknown new power on the world -- and if they fail, the price will be the extinction of the human race.

"Age of Ultron" had some pretty big shoes to fill, since the first "Avengers" movie was profitable, well-written and both funny and wrenching. And it doesn't quite have the same narrative cleanness and smoothness as the first movie, partly because it works across the world, darting around from the coldly sterile CERN to a dusty South African city to a wild, frenetic battle involving a flying semi-trailer truck. If anything, it's even more action-packed than the first -- the battle that ends the FIRST ACT is bigger and more explosive than what most action movies can muster.

Fortunately, Whedon keeps this from being a mindless explosionfest by sometimes slowing the story down, exploring the characters' scars and traumas during the quieter moments. Lots of humor is woven into the otherwise grim story ("Don't take any from my pile!"), along with some deliciously snarky dialogue ("What's the vibranium for?" "I'm glad you asked that, because I wanted to take this time to explain my evil plan..."). Despite the bleakness of the overall story, he brings some heart and warmth into the seemingly hopeless, chaotic clash with Ultron.

The problem? That would be Natasha, whose main plot thread in this movie is to angst a bit, flirt with Bruce, and be captured by the villain so her love interest can rescue her. It feels like Whedon doesn't want to write any female character who isn't a Wounded Superpowered Teen Girl (such as Wanda) so he simply went with the laziest, most sexist route.

And it's a shame, because most of the other characters are fleshed out well. Wanda's ability to shoot thready red energy into people's heads and manipulate their minds leads to the team doubting not only their unity, but their own selves -- Bruce retreats into his shell after a brief Hulk rampage, Tony's obsession with safety ramps into overdrive, and even the confident Thor is rattled by a terrible vision that... well, won't really be resolved in this movie. And while Olsen and Taylor-Johnson's characters aren't explored too deeply, one wrenching scene explores the root of their rage and resentment.

And of course, there's Ultron. James Spader gives a glorious performance as the titular AI; Ultron comes across as a warped, genocidal version of Tony himself. He's smart, obsessed with upgrading himself, often goes on rambling tangents ("Humans make... small humans..."), but with a core of rage behind it all.

Whedon stumbles badly with the characterization of Black Widow, but otherwise "The Avengers: Age of Ultron" is a powerful, well-written action epic -- wild, funny and wrenching in turn. And of course, the groundwork is laid for future adventures...

Avengers: Age of Ultron goes full throttle start to finish, which also means it should’ve slowed down to let everyone catch their breath a few times. We all know the plot, but as the devil’s in the details, the question is how do all the pieces fit together. The answer is: Very well, indeed. Even if some of them get forced into place.

What’s Good: It’s a Joss Whedon vehicle. That means the rare synergy of action, humor and drama we’ve come to expect from him. Lots of cameos and appearances from supporting characters- Sam Wilson/Falcon and James Rhodes/War Machine for example- as well as other denizens of the MCU. Even Idris Elba shows up for a minute as Heimdall (hey- that’s three black guys! Wow.). There’s also all the references and easter eggs you’ll have fun spotting: like a certain African nation, for example.

For those (rightly) complaining about Hawkeye’s lack of… well, anything remotely useful, brace yourselves. Clint Barton looms large in this one and is quite relevant to the plot. Go figure. Besides that there’s quite a few twists you won’t expect and things definitely get worse before they get better. The Vision’s debut is a bit shaky, but works out ok.

What’s Bad: believe it or not, the movie does have some warts. Noticeable in their absence are Pepper Potts and Jane Foster; though explained via some light comedy, you still wonder why they’re not around. One of my main bones to pick was Ultron’s origin sequence; it was surprisingly brief, almost rushed- like it was only there because it had to be. He almost literally just snaps into being and is already rolling. It really wouldn’t have hurt anything to spend a little more time on Ultron’s development and a lot less on the 3D-driven mindless, wholescale destruction fight scenes (and yes, I do mean the Iron Man vs Hulk battle. That one might as well have been ripped from anime). Because frankly, some of them didn’t make much sense and kind of send you into sensory overload. More than a few times there’s simply too much going on here; you're exhausted just watching them.

And the emergence of the Maximoff twins brings us right back to the ongoing unanswered question of how the X-Men figure into all of this. Because there’s no way they can, even with Magneto’s children in the mix.

What’s Left: the blockbuster you’ve been waiting for that sets up just about every other Marvel movie on the horizon. Oh, and there’s only one mid-credits scene to watch for- and it’s a killer! Hint: it’s foreshadowed during the movie. 4/5 stars.
Read more
Helpful
Comment Report abuse
There are 4 customer reviews and 5 customer ratings.
See all 4 customer reviews
Write a customer review