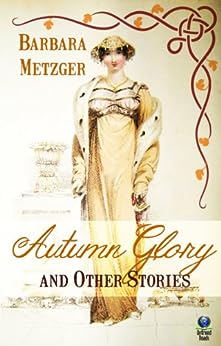 letterEletterD
5.0 out of 5 stars Original and Fun
Reviewed in the United States on 6 January 2014
Verified Purchase
One of the things I liked best about this collection is you could read each of the stories in about two hours, yet they were all satisfying and complete. Metzger manages to get you emotionally involved with the characters and laughing out loud, which isn't that common in novellas--I bought another collection of hers (Greetings of the Season and Other Stories) after because these were so good.

AUTUMN GLORY is an old story, but I very much enjoyed Metzger's take on it. Three daughters, the first two spoiled by their mother, the youngest somewhat disdained, are to be wed (at least their mother has decided so). Enter several eligible bachelors for the Hunt and the Hunt Ball, only no one ends up with whom Lady Bannister had plotted. The youngest daughter--Irmagard!--is definitely the star of the show and a heroine to remember!

THE MANAGEMENT REQUESTS was my favorite of the stories--the heroine, Hope, mistakes the hero, Arthur, for the manager of the hotel, an impression he does not initially correct because he thinks it doesn't matter, but of course it ends mattering a lot. It is ridiculous--and quite funny--yet also believable. Arthur, a war hero who feels pretty embarrassed about his limp, is also smart and kind and perfectly ready to marry Hope--if only she hadn't exaggerated and made him think she was engaged to someone else! This is the only regency I have read that is almost entirely in a hotel, and I found both the history and the love story wonderful.

A MATCH MADE IN HEAVEN--OR HELL really startled me at first--St. Peter and the Devil begin and end the story arguing over who will get a wicked duke's soul when he dies on the battlefield. They end up saving his life in order to settle a bet, and the Devil send an imp (in the shape of a dog) to ensure the Duke doesn't meet any "worthy women" who might save him. The imp is perfectly terrible at his job, leading to hilarity and a greet spin on an old cliche.
Read more
2 people found this helpful
Report abuse

Ernie
4.0 out of 5 stars 3 stories, 3 reviews
Reviewed in the United States on 28 January 2014
Verified Purchase
I haven't read a whole bunch of Barbara Metzger books -yet- but I'm really liking them. She writes clean regency romances with humor. I don't mind predictable reads when they are entertaining and engaging.

Autmn Glory - 5 stars. This story delivered what I expect from Ms. Metzger. I liked it. The heroine had inventive ways to prevent her mother from forcing her and her two older sisters to marry men they don't love. With the help of the hero, of course.

The Management Requests - 4 stars. The story line was fine. But I was surprised by references to 'the little soldier standing at attention.' It wasn't necessary, even if the phrasing was slightly amusing. And one of the things I like about Metzger's books is the squeaky clean romance.

A Match Made in Heaven - or Hell - 3 stars. Beginning the storywith a conversation between Saint Peter and Old Nick was different. Reminiscent a bit of the start of It's a Wonderful Life. I liked the dog Imp that Old Nick sent to prevent the romance. This story has a wee bit more sex than the one before. There are no steamy, explicit scenes, but it is just not quite as clean as I was expecting. Barbara Metzger can write wonderfully and doesn't need to rely on this to pull her stories through. Also, I just didn't care for the hero and heroine as much in this story. They weren't as likable or as developed as some of her others. I liked Saint Peter, Old Nick and Imp better.

Greetings of the Season is a better collection of stories. It is the reason I bought Autumn Glory.
My favorite books so far are Miss Lockharte's Letters and The Primrose Path.
Read more
One person found this helpful
Report abuse

Hellen
5.0 out of 5 stars Three wonderful stories in one great place!
Reviewed in the United States on 22 November 2013
Verified Purchase
Autumn Glory
As fun as any Metzger story I've ever read, with a predictable ending, but the joy is in the journey, not the destination.

The Management Requests
I liked how each chapter was titled in such a way as to be a request from the management of the hotel where Arthur and Hope meet. It was cute and clever plus the chapters followed along those lines in many ways without reading like a list. Metzger shows her humor in the telling of this tale as well.

A Match Made in Heaven-Or Hell
I was somewhat confused in the very beginning this somewhat omniscient narration going on that turned out to be good and evil arguing over Hugh's soul, but as soon as I understood what it was I loved that element of the story. It added a certain pizzazz to the story and plot. I truly loved every story in this collection and I highly recommend it to both fans of Barbara Metzger and lovers of regency romance. A great collection where each story would be worth something on it's own, but put all together for the reader's convenience!
Read more
One person found this helpful
Report abuse

Tchipakkan
4.0 out of 5 stars Should be a movie!
Reviewed in the United States on 5 August 2021
Verified Purchase
I keep replaying the scene on the stairs and laughing out loud, drawing questions from those near by, and of course I can't describe it as well as it was written. !etzger's humor is one of the reasons I fell for her writing. Autumn Glory, and her mischievous heroine is my favorite.
Read more
Report abuse

Sandy Milan
4.0 out of 5 stars Loved the first story, the other 2 are ok
Reviewed in the United States on 25 November 2014
Verified Purchase
The best story is the first story and the book is worth buying for it alone. Lovely tale of how 3 sisters plot to outwit their father's plan to marry them off. The youngest sister and her schemes with the H were Ms Metzger at her best. The second story with the H being mistaken for the manager of the hotel by the h was ok and 3 stars. Some of it defied belief. The last one with the devil and St Peter fighting over the H was my least favourite but it wasn't bad. It would have been way better without the involvement of Old Nick and St Pete.
Read more
3 people found this helpful
Report abuse
See all reviews
Back to top
Get to Know Us
Make Money with Us
Let Us Help You
And don't forget:
© 1996-2021, Amazon.com, Inc. or its affiliates