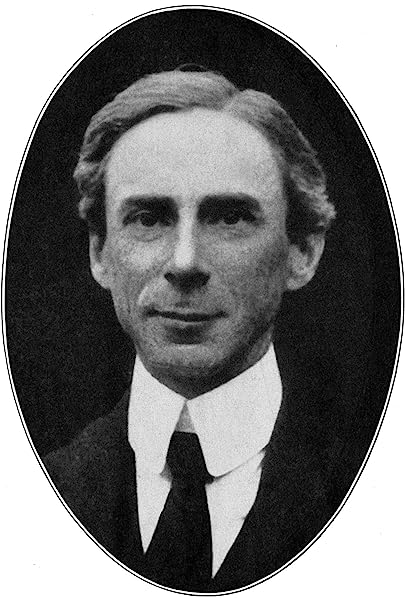 by Bertrand Russell (Author)
4.4 out of 5 stars 20 ratings
Edition: 2nd
See all formats and editions
Sorry, there was a problem loading this page. Try again.

Bertrand Russell was born in 1872 and died in 1970. One of the most influential figures of the twentieth century, he transformed philosophy and can lay claim to being one of the greatest philosophers of all time. He was a Nobel Prize winner for Literature and was imprisoned several times as a result of his pacifism. His views on religion, education, sex, politics and many other topics, made him one of the most read and revered writers of the age. This, his autobiography, is one of the most compelling and vivid ever written.
This one-volume, compact paperback edition contains an introduction by the politician and scholar, Michael Foot, which explores the status of this classic nearly 30 years after the publication of the final volume.

"Riveting...the detailed expression of a mind of a genius in the making."
-Jessica Mitford
"He is frank about himself--his acts, thoughts and emotions--as Pepys or Rousseau, and the book is, therefore, like theirs, an extraordinary psychological revelation."
-Leonard Woolf

Start reading The Autobiography of Bertrand Russell on your Kindle in under a minute.

Bertrand Russell (1872 - 1970). Philosopher, mathematician, educational and sexual reformer, pacifist, prolific letter writer, author and columnist, Bertrand Russell was one of the most influential and widely known intellectual figures of the twentieth century. In 1950 he was awarded the Noble Prize for Literature in 1950 for his extensive contributions to world literature and for his "rationality and humanity, as a fearless champion of free speech and free thought in the West."

oxcambloom
5.0 out of 5 stars Everything was fine
Reviewed in the United Kingdom on 23 March 2021
Verified Purchase
All was just it was presented. The book is in really good condition. Thank you!
Read more
Report abuse

Ron
3.0 out of 5 stars a big difference between bertrands writing and bertrands character
Reviewed in Canada on 21 April 2017
Verified Purchase
i cant recommend it, though i love russell. by the end of it, chapters are 10 pages long and otherwise just selections of letters. maybe its too much to call it misogynistic, but after his first two out of five wives, his last three wives are given passing, singular mentions. and i didnt like how he presented his first wife later on. its kind of a series of anecdotes. its easy reading, though. but its not revealing, at all.

thats the problem with modernists: theyre such incredible artists, but you scratch the surface just a bit, and its clear theyre all monsters

Karl Gruber
5.0 out of 5 stars where are the Russells of today?
Reviewed in Canada on 5 June 2020
Verified Purchase
Clear thinking and writing of a very high order.
Read more
Report abuse

J. Lewis
4.0 out of 5 stars The Last of the Great Victorians
Reviewed in the United States on 25 April 2016
Verified Purchase
I first discovered Bertrand Russell through his essays during my college days, when I needed and sought intellectual guides to help me make sense of a world that I was beginning to understand as filled with injustices, irrationalities and just plain everyday foolishness. Russell was one of the most important of these guides for me. His rationalism, incisive intelligence,and hopefulness as he fought up-hill battles against narrow-mindedness, religion and convention, and suffered for it, became inspirational for me. It remains inspirational to me in our own day as I witness the abandonment of Russell's kind of critical judgment in favor a range of dead-end agendas from identity politics to post-modernist "discourses" that all end in a relativism behind which lay but a thinly veiled nihilism. So I finally decided to tackle this thick auto-biography to get a deeper knowledge of one of my intellectual mentors in his own words. What I got from it was a clearer understanding of "Lord Russell" as perhaps the very last of the great Victorians, a connection into recent history of a world that seemed to me as far-gone as ancient Rome. Russell literary skill for which he won a much deserved Nobel Prize is likewise evident here. But what was most compelling for me was the deeper insight into Russell the man as opposed to the world-famous philosopher, essayist and activist that I got from this bio. Beneath one of the twentieth century's most brilliant minds and most important philosophers was a human being of great sensitivity, character and perseverance for whom love, friendship and human warmth was as important as his impressive intellectual pursuits. That said, this book is probably best suited to true Russell fans like myself. Russell reproduces many letter from and to friends and family here, which a more general reader might find tedious. And despite my great interest in and admiration for the man, I think he does go on rather too long and in too much detail about some of his activism, particularly about his involvement in the anti-nuclear campaign in the UK in the 1950s and 60s as his long life drew to its close (though this is not to underestimate the importance of that movement in influencing opinion during the Cold War). The more general reader might enjoy the many collections of Russell's essays. This auto-biography is better suited to those we who consider Russell an important influence in our own lives.
Read more
13 people found this helpful
Report abuse

D. M. Brokaw
5.0 out of 5 stars *Comment on the typeface for this Routledge edition*
Reviewed in the United States on 12 March 2008
Verified Purchase
Caveat emptor: whilst this is a magnificent autobiography published in one quality volume by Routledge, any potential buyers should be aware of the very small type setting of this book. I am 31 years with 20/20 eyesight and I find it immensely difficult to read. Try this out: take a word document and change it to 10pt. Times New Roman font, single spaced, and imagine it on bright white copy, 3" wide paragraphs. I've repeatedly tried to read this book, but the effect is so hypnotic on the page such that I cannot. The font is reminiscent of (but worse than) those cheap paperback classics read in school, by Signet or some such version.
Since I do actually want to read this book, I am now in search of a readable copy. What does it matter to have it in one or two or six volumes, as long as I can appreciate the words? I am deprived of the pleasure of regarding the words on the page. I hope this helps someone make a decision.
Read more
30 people found this helpful
Report abuse
See all reviews
Back to top
Get to Know Us
Make Money with Us
Let Us Help You
And don't forget:
© 1996-2022, Amazon.com, Inc. or its affiliates