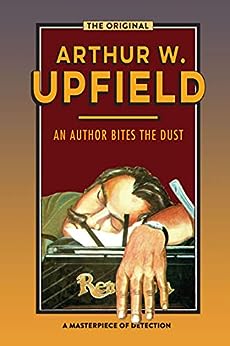 by Arthur W. Upfield (Author) Format: Kindle Edition
See all formats and editions
Sorry, there was a problem loading this page. Try again.
A cat... a ping-pong ball... a drunken gardener... With these slight clues to go on Detective-Inspector Bonaparte investigates the mysterious death of famous author, Mervyn Blake, who dies an agonising death late one night in his writing room.
But how did he die? No one knows. No one that is until Bony's acute observation of human nature uncovers the murderer - and the method used to kill Blake. One of the few Bonaparte mysteries not set in the outback, reveals Upfield at his best and most ingenious.

A classic Australian mystery. --This text refers to an alternate kindle_edition edition.

An Englishman by birth, Arthur Upfield tried his luck in Australia in 1911. After a short spell as a waiter in Adelaide, Upfield felt drawn towards the Interior where he became a boundary-rider, offside-driver, cattle-drover, opal-gouger, rabbit-trapper, vermin fence patroller and manager of a camel station, drifting through the strange terrains and unusual company which were later to become the subject of his 35 novels, including 29 featuring Napoleon Bonaparte, or ‘Bony’ the Aboriginal detective. These books began in 1929 with The Barrakee Mystery. In the early 1970s there were 26 BONEY episodes made for TV, and a new series for international TV will begin in 2019.

Amazon Customer
5.0 out of 5 stars From another simpler time - enjoyable
Reviewed in Australia on 23 June 2019
Verified Purchase
I love Arthur Upfield's books. He tells a great story with just the right mix of character detail and event explanation. Sounds trite but Upfield's writing takes me to a place of comfort. The quiet corner, the comfortable chair, cup of liquid of my choosing, and just a good escapist read.
Read more
Helpful
Report abuse
See all reviews

Spindrift
5.0 out of 5 stars This compact volume is in the Scribner Crime Classics series ...
Reviewed in the United Kingdom on 18 September 2014
Verified Purchase
This compact volume is in the Scribner Crime Classics series and can be read in an afternoon and evening to fully appreciate the deroulement of the ingenious plot. Upfield's Napoleon Bonapart detective is launched on an enquiry by his boss during a spell of leave. Setting is almost suburban NSW in Australia in a literary milieu. This book may well reflect Upfield's own brush with different cliques of writers in Australia and is quite shrewdly observed adding piquancy to the characters portrayal. Will not say too much about the story but that i found it very enjoyable with touches of humour interwoven with sinister revelations.
Read more
One person found this helpful
Report abuse

Michele
5.0 out of 5 stars Bony Book!
Reviewed in the United Kingdom on 9 September 2013
Verified Purchase
I am an officionardo of Bony books and only need two more to complete the entire set. This novel is not set in the outback and is rather wordy at times and so requires some skim reading. However, it is the usual plot of Bony's insight and intelligence getting the better of the bad guys!
Read more
One person found this helpful
Report abuse

Peter A. Clark
5.0 out of 5 stars Boney
Reviewed in the United Kingdom on 12 March 2011
Verified Purchase
Another splendid volume to add to my collection of Arthur Upfield books. Good condition and an excellent read. And very good value for money!
Read more
One person found this helpful
Report abuse

N. Stuth
5.0 out of 5 stars Great
Reviewed in the United States on 11 December 2014
Verified Purchase
Bony mysteries are the best! Great description of 1020's - 1950's Australian life and environments. My late Range Scientist husband loved them and the recordings do not disappoint, a great way to revisit an old friend, Inspector Bonaparte.
Read more
One person found this helpful
Report abuse

Jill Gardiner
5.0 out of 5 stars Love all the Bony Detective books
Reviewed in the United States on 16 May 2014
Verified Purchase
This is another Bony detective story that keeps you guessing all thru the book. LOVE the Bony books. I hope some day they make a TV series on these books.
Read more
One person found this helpful
Report abuse
See all reviews
Back to top
Get to Know Us
Make Money with Us
Let Us Help You
And don't forget:
© 1996-2021, Amazon.com, Inc. or its affiliates