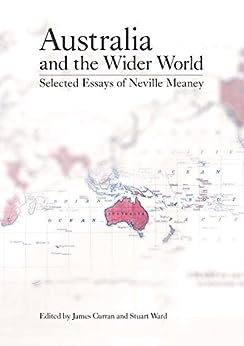 Since the 1960s Neville Meaney has been asking probing questions about social change and the rise of nationalism, especially as found in the making of Australia's self-image and its engagement with the world. His efforts to unravel what he once called 'the riddle of Australian nationalism' have raised important, and often unsettling, challenges for Australians. Bringing together the cultural, intellectual, political and diplomatic dimensions of the national experience, Meaney's work has been dominated by two overarching and interconnected questions: how Australians should resolve the tension between the ‘community of culture’ and the ‘community of interest’ and how they should reconcile their British heritage with their Asian moorings?

A number of topics standout out in the essays – racial discrimination and immigration, the evolution of Australia's Pacific policy, the coming of the Cold War, doubts about the American alliance, the Communist threat and relations with Asia, notably Japan. His treatment of all of them shows how Australia was involved with the wider world and how politicians and policymakers responded to these momentous issues.

If, as Neville Meaney once wrote, the purpose of studying the past is ‘to clarify the argument, mediate the passion and enlighten the judgment’ then these essays, when considered singly or together, will undoubtedly have an enduring value.

Neville Meaney is an honorary associate professor of history at the University of Sydney.

James Curran is an associate professor at the University of Sydney and Keith Cameron Professor of Australian History at University College, Dublin.

Stuart Ward is a professor in the Centre for Australian Studies at the University of Copenhagen.