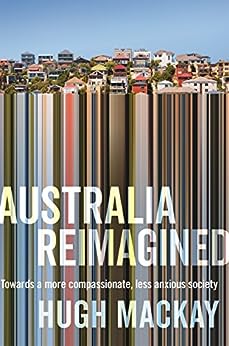 A courageous and passionately argued treatise on how we harness the power of the new era to create a stronger, fairer society. --This text refers to the paperback edition.

Argued with intelligence and passion, this book is essential listening for everyone who loves Australia enough to want to make it a better place for us all. --This text refers to the audioCD edition.

Hugh Mackay is a social researcher and bestselling author of 19 books, including <i>The Good Life, The Art of Belonging</i> and his latest, <i>Australia Reimagined.</i> He has had a 60-year career in social research, and was also a weekly newspaper columnist for over 25 years. Among many honorary appointments, he has been deputy chairman of the Australia Council for the Arts, chairman of trustees of Sydney Grammar School, the inaugural chairman of the ACT government's Community Inclusion Board and an honorary professor at Macquarie, Wollongong and Charles Sturt universities. He is currently a patron of the Asylum Seekers Centre. In recognition of his pioneering work in social research, Hugh has been elected a Fellow of the Australian Psychological Society and awarded honorary doctorates by Charles Sturt, Macquarie, NSW, Western Sydney and Wollongong universities. He was appointed an Officer of the Order of Australia in 2015. --This text refers to the paperback edition.

Hugh Mackay is a social researcher and bestselling author of 19 books, including The Good Life, The Art of Belonging and his latest, Australia Reimagined. He has had a 60-year career in social research. He is currently a patron of the Asylum Seekers Centre. In recognition of his pioneering work in social research, Hugh has been elected a Fellow of the Australian Psychological Society and awarded honorary doctorates by Charles Sturt, Macquarie, NSW, Western Sydney and Wollongong universities. He was appointed an Officer of the Order of Australia in 2015. --This text refers to the audioCD edition.
Read more

Darren Cronshaw
5.0 out of 5 stars Diagnosis and proactive suggestions for solutions to Australian social issues
Reviewed in Australia on 11 November 2018
Hugh Mackay is Australia’s best known social researcher and author 25 years ago of Reinventing Australia. In Australia Reimagined he shows he continues to have his finger on the pulse of a range of pressing social issues and points in some bold and radical directions for change.

Mackay’s portrayal of what is going wrong is especially concerning for me as I look towards the future of Australia through the eyes of my children. He identifies challenges of relationship breakdown, fragmented neighbourhoods, economic inequality, housing affordability, underemployment, neglect of First peoples, rampant gambling, 100,000 homeless Australians and 65,000 attempted suicides annually. He describes our heartless treatment of asylum seekers (despite a majority of Australians advocating a more welcoming approach), excessive reliance on digital technology, degrading school system and increasingly commercialized university system, and distrust of institutions including parliament, churches and banks,. As a reader I was aware of many of these issues, but Mackay’s analysis gave me stark insights into their extent and implications. Moreover, he opened my eyes to realities I was unaware. For example, lagging behind the pressing social issues our nation faces is a lack of philanthropy; e.g., almost 40% of Australians earning over a million dollars do not claim a single dollar of tax-deductable charity donations! And people report concerning levels of distrust in their neighbours – not because neighbours are universally untrustworthy, but because we do not know our neighbours enough. The biggest challenge Mackay identifies, however, is the heightened and widespread anxiety epidemic. We are an overbusy, hyperconnected, financially overstretched, overweight, overmedicated and overanxious society.

Thankfully Mackay does not simply identify problems but points in alternative directions. Often these are bold and radical suggestions, especially in the four ‘fault lines’ of gender, religion, politics and education. Mackay suggests the gender revolution has stalled and urges a new level of partnership between women and men. As a necessary kickstart he appeals for quotas of women on boards and in leadership positions. Regarding religion, Mackay observes that despite the decline of church attendance there is an increasingly pervasive understanding of God being with and in us and increase of those who self-identify as ‘spiritual but not religious’. If anxiety is the most pressing social issue in Australia, then compassion and mutual respect that religion or any spirituality at its best can foster is the biggest need and solution. The main problem with politics, Mackay suggests, is our adversarial system and so he suggests parliamentary reform, perhaps even nominating representatives by ballot or at least directly recruiting experts as ministers. In the meantime, he urges expecting better service from our parliamentarians (and not calling them politicians). Finally, he challenges the rhetoric of ‘choice’ in education and urges phasing out public money for private schools in the interests of a more egalitarian system offering quality education for all.

One area I would like to read more from Mackay is about more compassionate relationships with Indigenous peoples. Mackay notes Australia’s moral blindness led to one of the worst records of treatment of her First Peoples: ‘For too long, the heart of our nation has been hardened towards its First Peoples, partly because moral and emotional disengagement is an effective way of avoiding the burden of our national shame.’ (p.85) He bemoans how we continue as a nation to fail to act in constructive directions. For example, in 2017 we debated whether to include reference to Aborigines in the constitution’s preamble. The Aboriginal and Torres Strait Islander Constitutional Convention of May 2017 issued the ‘Uluru Statement’ that appealed instead for a more serious constitutionally enshrined voice to Parliament, with an Indigenous body outside the Parliamentary structure that advises on issues and legislation related to Indigenous people. Outrageously, it was dismissed and not even discussed by Malcolm Turnbull and his cabinet. Reconciliation with indigenous peoples and closing the gap of inequality of healthcare, education and political representation desperately needs more reimagining and compassionate action along the lines of Mackay’s social vision.

Mackay’s writing suggests many implications for mission and leadership of our churches and agencies. We need a spirituality for our times and I appreciate Mackay’s comments on the power of faith and faith community. We need to model alternatives to materialistic consumerism and develop new ethics in the context of the digital revolution. Locally we need to proactively foster neighbourly connections; among my favourite stories Mackay narrated were the neighbourhood Facebook groups and associated street parties that connected neighbours. Given the declining trust in institutions, we need to reclaim (and re-earn) trust as leaders including the church. Ultimately, we need to join together in thinking innovatively about our most pressing social issues. Mackay celebrates the Aussie innovativeness and resourcefulness that he inspired me to draw on in my research and leadership: “Our capacity for hard thinking, tempered by compassion – the powerful combination former NSW Premier Nick Greiner described as ‘tough minds, tender hearts’ – is what has always prevented us from descending into chaos, and it can keep preventing us” (p.2).

Australia Reimagined is an antidote for complacency and a manifesto for compassion that calls for courage, wisdom and imagination towards a less anxious society. It is essential reading for community leaders and anyone interested in understanding our pressing social issues and proposing alternative solutions.

Ian Murray
4.0 out of 5 stars Classic Hugh MacKay, insightful, challenging, depressing at times.
Reviewed in the United States on 9 November 2018
Verified Purchase
Classic Hugh MacKay, certainly tells it as it is, insightful and challenges you to focus on the reality not just the hyperbole which can be a bit depressing.
Read more
Report abuse
See all reviews
Back to top
Get to Know Us
Make Money with Us
Let Us Help You
And don't forget:
© 1996-2021, Amazon.com, Inc. or its affiliates