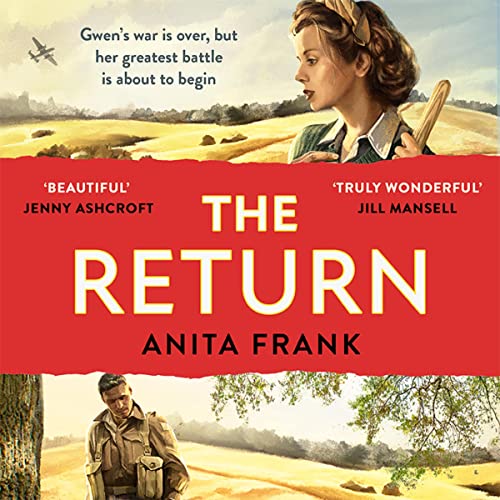 Jack’s war is over, but his greatest battle is about to begin.

From the author of The Lost Ones, shortlisted for the Goldsboro Books Glass Bell Award and Historical Writers’ Association Debut Crown Award....

Jack Ellison’s war is over, but the battle for his family has just begun.

When Jack left for the war, he made a parting pledge to his pregnant bride, Gwen, that he would never return. It was, after all, best for everyone that he didn’t.

Now, as celebrations erupt for Victory in Europe, Gwen is terrified that Jack will renege on his promise, threatening the life she has built for herself and their son on the family farm.

But war has changed Jack, and he is coming home, determined to claim a place in Gwen’s life—and her heart.

As events of the past come back to haunt them, Jack and Gwen find themselves facing their greatest battle—and it is a fight neither of them can afford to lose.

In this sweeping historical story with huge heart, Anita Frank weaves a glorious tale of love and loss, secrets and promises.

Switch between reading the Kindle book & listening to the Audible narration with Whispersync for Voice.
Get the Audible audiobook for the reduced price of $12.49 after you buy the Kindle book.
Learn more about membership
By completing your purchase, you agree to Audible’s Conditions Of Use and Privacy Notice.
Sold and delivered by Audible, an Amazon company

4.4 out of 5 stars
4.4 out of 5
16 global ratings
How are ratings calculated?
To calculate the overall star rating and percentage breakdown by star, we don’t use a simple average. Instead, our system considers things like how recent a review is and if the reviewer bought the item on Amazon. It also analyses reviews to verify trustworthiness.

Kai_63
5.0 out of 5 stars Stunning writing and intriguing premise!
Reviewed in the United Kingdom on 3 January 2022
Verified Purchase
I loved Anita Frank's debut The Lost One and am pleased to say the same for The Return!

Set between 1939 and 1945, the premise of the book - a pledge made by husband Jack not to return to his pregnant bride should he make it to the end of the war - is full of intrigue. The author beautifully reveals what led to this unusual pledge, flipping back and forth through the timelines.

The writing is stunning. There are entire scenes that took my breath away for their restraint and evocativeness. In particular, the points in the novel where the author reveals a tentative and fragile new attraction between two characters is so emotionally wrought my own heart could barely take it.

This is a wonderful novel, skillfully covering the themes of love, redemption and loss.

CAOB
5.0 out of 5 stars Beautiful
Reviewed in the United Kingdom on 22 January 2022
Verified Purchase
A wonderfully immersive read, The Return offers an unusual dual timeline, showing us life in a beautifully drawn farming community, both immediately before and after the Second World War. A deftly woven plot gradually grows into a gorgeous love story with an enigmatic hero at its heart; I couldn't help but root for Jack despite the suggestion of his very dark past. Richly authentic, Frank excels in her vivid portrait of a flawed hero, a wartime farm and the beauty of the English countryside.
Read more
Report abuse

Amazon Customer
5.0 out of 5 stars A beautifully written love story
Reviewed in the United Kingdom on 8 March 2022
Verified Purchase
I tend not to read historical romantic novels but as I was so taken by The Lost Ones, I was intrigued to read Anita Frank’s second novel The Return and I am glad I did.
The Return is beautifully written. The story set between 1939 and 1945 is so evocative of that time and I was quickly caught up in the love story. Gwen and Jack felt very real to me. The lovely descriptions of the land, nature and the daily work of the farm really added to the book’s authenticity. On finishing the book I felt a hankering to a more simple yet enriched way of life.
Read more
Report abuse

Love writing
5.0 out of 5 stars Upmarket wartime romance
Reviewed in the United Kingdom on 14 January 2022
Verified Purchase
Great story and very competently told. This is a romance set against the backdrop of rural England in the Second World War. The author draws on her own family experience to paint an immersive portrait of rural change stimulated by conflict, a change mirrored in the development of farmer Gwen herself.
Read more
Report abuse

PCA LARSIMONT
5.0 out of 5 stars Rural love story during WW2
Reviewed in the United Kingdom on 22 April 2022
Verified Purchase
I enjoyed this book immensely. I had expected more war and less agriculture, but in the end, that was OK. Is charming, poignant, and keeps up a good pace. The denouement is satisfying and well handled.
Read more
Report abuse
See all reviews