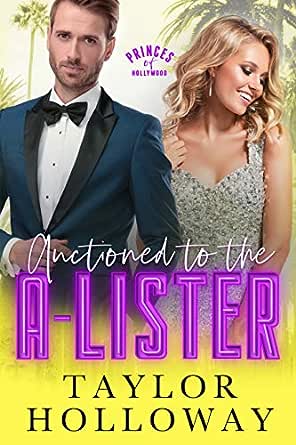 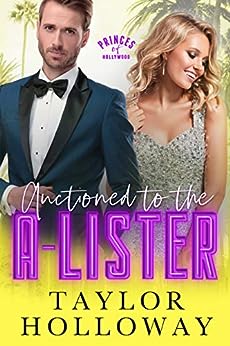 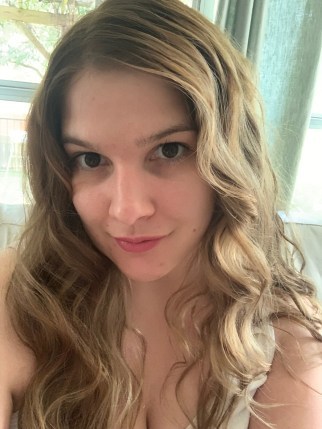 Auctioned to the A-Lister: A Sweet and Sexy Retelling of Cinderella Kindle Edition

I snuck into a charity ball and accidentally got myself auctioned off to Hollywood’s sexiest, most eligible bachelor.
This is going to be VERY hard to explain to my evil stepmother.

I escaped my monotonous life for one enchanted evening.
I even danced with a prince. Tommy Prince, America’s most lusted-after movie star.
He must have liked me because he decided to cut a one-hundred thousand dollar check to the Humpback Whale Conservation Fund to take me out on a date.
But it’s only a matter of time before this fantasy shatters.

I’m not the typical Hollywood arm-candy.
I’m an awkward, nerdy virgin working a dead-end job, while he’s the hottest actor in the world.
His rugged good looks, alpha attitude, and dogged pursuit of me is making him impossible to resist.

But my fame-hungry stepmother has her own plans for Tommy, namely my shallow, beauty queen stepsisters.
When I’m safe in his strong arms I can imagine a happily ever after for us, but my life has been no fairy tale so far.
I might have to give Tommy up to keep my crazy step-family from destroying us both…

‘Auctioned to the A-Lister’ is a sweet and sexy romcom featuring a brilliant, alpha Hollywood hero and a nerdy, plucky girl next door on a crazy road to happily ever after. It stands alone with no cheating, cliffhangers, or nonsense.

Avid reader
2.0 out of 5 stars Maybe it gets better but I couldn’t force myself to finish this book
15 February 2020 - Published on Amazon.com
I read part of this book through kindle unlimited and I gotta be honest I couldn’t finish it. I read 35% of this book but after I realized that every other page I was thinking “why am I wasting my time on this”, I finally gave up. I was really looking forward to this book. I had previously read the other books in the Prince family series and really enjoyed those romances. But this was just so bad. This was just such a lame plot retelling of Cinderella, but honestly maybe even the Disney version is easier to swallow. The heroine is a virgin (of course) and she loses her virginity in the back seat of a van to a Hollywood A list actor who she hardly has spent more than a couple of hours with over a two day period and the conversations that were written as taking place were so shallow, mundane and so limited in nature I couldn’t feel any real spark or connection. I mean they know next to nothing about each other. How realistic is it ( or romantic for that matter) that this 33 year old Hollywood royalty type chose to “make love “ in a van that 1) smells of chemicals and that 2) the heroine has been sleeping in. Why didn’t this rich wonderful “prince” stop and take the heroine somewhere (anywhere really ) nicer than a smelly old van. He lets her lose her virginity that she has been hanging on to for 23 years on a public street in a smelly van. Then after this scene they directly go off to a nice hotel and are asking get to know you questions but I still didn’t feel that these characters had any connection to each other and I certainly had no connection to either of them individually or as a couple. The whole thing felt so sordid and disconnected and definitely NOT romantic. I personally read to escape but this was unsatisfactory, inane and not romantic so I had enough. Maybe it gets better, but I couldn’t force myself to keep reading. I would recommend the others in this series, but not this one.
Read more
6 people found this helpful

Daisy Sauceda
5.0 out of 5 stars CIndy and Tommy
14 February 2020 - Published on Amazon.com
This book had me hooked. So it doesn't slowly build but doesn't jump right into the story. So I knew it was a Cinderella re-telling and let me say it was good. I sure did not see some of the twist and turns coming. I felt so bad for Cindy and her step family definitely not. So naturally you are always rooting for the underdog. Then you have Tommy Prince, he was different. This story has him following orders or sticking to his life plans. Both Cindy and Tommy are two completely different people who have a chemistry that could either destroy what could bloom them or just explode in love. Can Cindy take control of her life or continue to let her step mother control her. Will Tommy continue on his career path or will he sees a different path. My emotions were all over the place with a love/hate for a few characters. Other than that it is a wonderful book to read.

**ON A SIDE NOTE, DO NOT READ WHEN YOU HAVE TO WORK CAUSE HAVING TO BOOKMARK TO GO BACK TO WORK ONLY TO WISH YOU COULD FINISH THE BOOK. IT WAS A LONG WAIT BUT I COULD NOT HELP THE FACT THAT I WAS HOOKED.**

Nancy NC
5.0 out of 5 stars A Tale of Love and Wishes That Do Come True for Cindy and Her Prince
15 February 2020 - Published on Amazon.com
Cindy Brown has never known a mother’s love. Before she walked out on Cindy and her dad, Cindy’s biological mother shared with her young daughter that she had never wanted to have a child. When her dad remarried again to a woman with two daughters, Cindy quickly learned that she would be the stepchild in her own home. Her new “family” had very little use or room for Cindy in their world. And for thirteen years, Cindy has been tolerated only because she was her father’s beneficiary and upon his unexpected death, those benefits went to her. And if she continued to be in the “family,” those funds could be managed by her stepmother, Marigold, assuring that the monies were “properly used”. And she did “properly use” them to provide her daughters with dance lessons and pageant attire as she promoted their dreams of being discovered by a talent scout. To further promote the dreams of Quincey and Greenlee becoming Hollywood’s newest starlets, Marigold redirected Cindy’s college fund to finance the family’s relocation from Altoona, Wisconsin to LA and to finance the purchase of a dry cleaning business in West Hollywood where Cindy is expected to work diligently, but Marigold, Quincey and Greenlee merely float though to check on things and to see if any of the cleaners’ clients might be useful in furthering the Hollywood dreams of Marigold and her girls.

Unknown to Marigold a contact has been made by Cindy that could open the doors of Hollywood. Isabelle Schmidt Prince, member of a powerful Hollywood family and the set designer specializing in practical effects and props for Nightstalker, a recent release from the Prince studio, was a client of the cleaner. And, in gratitude for the rushed, but quality cleaning performed by Cindy when Isabelle discovered that the werewolf suits had been “borrowed” and used in some sort of furry orgy, she wanted to personally thank Cindy, offering her a ticket to a Hollywood gala where the elite of Hollywood be present.

Borrowing a dress that she had recently cleaned, the LA Cinderella beautifully decked out for the gala, is mistaken for one of the elite LA society. And, as a beautiful woman in attendance at such and elite event, she is invited to participate in the date auction, the tool being utilized for fundraising on behalf of humpbacked whales, the purpose of the event. However, before the auction, when Tommy Prince, A-List actor and member of the Hollywood Prince family, bumps into her, almost spilling his glass of red wine onto Cindy in her borrowed blue silk gown, he is delighted by her humorous and witty response, and asks her to dance. So, when the auction commences and Tommy sees that Cindy is one of the beauties being auctioned, he bids and wins a date with Cindy in her borrowed blue dress. But, nothing is ever straightforward or simple, especially not love in a fairy tale or in life. And when the ever grasping step-family discovers Cindy’s connection with Tommy Prince, even the magic of love has to struggle to survive.

As Taylor Holloway weaves the unanticipated encounter of the strangers into lovers, she teases the reader with a re-telling of a modern-day Cinderella tale. With humor and style, Holloway effectively captures the magic of love when at odds with the injustices of life in the childhood tale of wishes that do come true when the heart is pure.

I received a free ARC copy of this book and am voluntarily leaving a review, but I enjoyed the reading experience so much that I will use my Kindle Unlimited to enjoy this series in my "read-again" titles.


Read more
3 people found this helpful
Go to Amazon.com to see all 56 reviews 4.3 out of 5 stars
Get FREE delivery with Amazon Prime
Prime members enjoy FREE Delivery and exclusive access to movies, TV shows, music, Kindle e-books, Twitch Prime, and more.
> Get Started
Back to top
Get to Know Us
Make Money with Us
Let Us Help You
And don't forget:
© 1996-2020, Amazon.com, Inc. or its affiliates