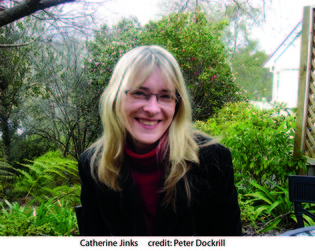 by Catherine Jinks (Author)
4.0 out of 5 stars 3 ratings
See all formats and editions
Sorry, there was a problem loading this page. Try again.

Catherine Jinks' books for adults, young adults and children have been published in a dozen countries and have won numerous awards, including a Victorian Premier's Literary Award and the CBCA Book of the Year Award (four times). She lives in the Blue Mountains.
Start reading The Attack on your Kindle in under a minute.

Robyn Ayres is a young primary school teacher in a small country town when she first encounters Aaron Rooney and his mad family. The six year old Aaron is a feral child that is largely uncontrollable in the classroom or playground. His grandmother, Joyce, is never far away. She signs up for reading with the children but is so disruptive she is banned from the classroom. Aaron’s father, Scott, is a police sergeant and a wife beater. His wife, estranged, is a timid and delicate little thing who now lives with her father who is rumoured to be ‘eccentric’. The child, Aaron, is tossed around in this toxic brew. Soon circumstances and the Rooney family cause Robyn to leave teaching altogether.

Ten years later she is the caretaker of Fish Island, a former leper colony off the coast of Queensland. It is basic but comfortable accomodation and various groups use it for various purposes. One group in particular, Vetnet, use it for boot camp style ‘tough love’ retreats for wayward teenage boys. The former soldiers have a good success rate with their methods. On one such camp Robyn is shocked to see that she recognises one if the boys. Only now Aaron is called Darren. This particular camp is a disaster with many of the boys acting up and causing fear, discord and injury.

Despite her fears of Darren, Robyn realises that he is not to blame for most of the pranks that this groups of boys have pulled. But when the ferry arrives with family members to come and watch the passing out parade of the boys Robyn is horrified to see the evil Joyce and Scott. What else can possibly go wrong? Quite a lot as it turns out, but there are some pleasant surprises in store for Robyn as well. Despite not hitting a lot of high notes, this book was entertaining enough and kept me engaged throughout. The story itself, or something similar, is probably being played out across the world right now and it is sad to think how many children must end up as pawns in their parents toxic fights. Thanks to Netgalley and Text Publishing for the much appreciated ARC which I reviewed voluntarily and honestly.

Jennifer
TOP 10 REVIEWER
4.0 out of 5 stars ‘I recognised him at once.’
Reviewed in Australia on 31 August 2021
It is 2019 and Robyn Ayres is the caretaker of Finch Island, a national park in Queensland’s Morton Bay. Finch Island was once used as a leprosy quarantine station and now is used for camping and holidaymakers. Robyn looks after maintenance of the buildings and provides catering for the groups that book the site. It is usually a quiet and isolated life, but Robyn does not mind. But Robyn’s relative tranquillity is about to be shattered.

The current group on the island is a week-long bootcamp run for young offenders and boys at risk. The group is run by a group of ex-army veterans: they have been here before. But the group they have this time is particularly challenging. While most of their pranks are annoying, some are dangerous. And Robyn is sure that she recognises one of the boys: he is called Darren now, but she knew him as Aaron.

In 2009, Robyn was a primary school teacher. Aaron was one of the boys in her class and he was at the centre of a custody battle between his parents. The odds were stacked against Aaron’s mother: his paternal grandmother was a particularly manipulative and nasty piece of work who nobody was prepared to cross. And Aaron, caught in the middle was disruptive and violent in school.

The story shifts between 2009 and 2019 and the tension builds. Robyn may have questions about the past, but in 2019 she and others are at risk. Her past, and Aaron’s, both become part of a dangerous present.

How will it end? You will need to read it to find out. I enjoyed this novel and found the ending satisfying.

Shelleyrae
5.0 out of 5 stars An absorbing thriller
Reviewed in Australia on 3 September 2021
I really enjoyed The Attack for its original premise, interesting setting (inspired by Queensland’s Peel Island) and characterisation. This is a well written, absorbing and satisfying thriller.
Read more
Helpful
Report abuse
See all reviews
Back to top
Get to Know Us
Make Money with Us
Let Us Help You
And don't forget:
© 1996-2021, Amazon.com, Inc. or its affiliates