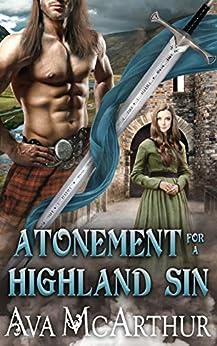 by Ava McArthur (Author) Format: Kindle Edition
See all formats and editions
Sorry, there was a problem loading this page. Try again.

Their marriage was supposed to end a feud, not cause a war.

Maura Calbraith's brother has committed an unforgivable mistake. While trying to defend their home from bandits, he accidentally killed the son of the neighboring Laird McGrory. Now, the Calbraiths must either let Maura's brother, the Laird's only son, die or go at war with the powerful McGrory clan. However, Maura has a different plan in mind.The brave lass proposes a marriage between herself and one of the McGrorys as a solution. This way, the two clans will have an alliance, and a substantial dowry will partially compensate for the death of the beloved son. Unfortunately, this is like sacrificing herself for the sake of her brother, so Maura's Father rejects the idea. Yet, Kevan McGrory, the cousin of the murdered man and future Laird of the McGrorys, will have the last say. Kevan is a man of logic and wants to avoid war at all costs. But at the same time, he can not let the death of his cousin go unpunished. Thus, marrying Maura to end the feud sounds like the perfect solution. Finally, the clans agree, and Maura finds herself in a foreign castle, with a man who detests her and no friends or allies by her side…Maura was hoping that she and Kevan would come close in time, but Kevan sees her as an enemy. To make things worse, he has a mistress and refuses to bed with his new wife! Maura is not the kind of person who would endure such treatment, and she makes it clear that if Kevan does not act like a husband is supposed to, the marriage will end.Gradually, as Kevan discovers the kind of a woman she is, he changes his attitude towards her. However, as the two begin to bond, Kevan is seen as a traitor by his clan. And if the one ally Maura had in this place is in danger, then so is she…Ava McArthur’s “Atonement for a Highland Sin” will take you on an exciting journey on the magical Scottish Highlands. Feel the surprise, agony, joy, and enthusiasm along with the heroes! Get your copy TODAY for FREE With Kindle Unlimited!
Enjoy!

4.3 out of 5 stars
4.3 out of 5
71 global ratings
How are ratings calculated?
To calculate the overall star rating and percentage breakdown by star, we don’t use a simple average. Instead, our system considers things like how recent a review is and if the reviewer bought the item on Amazon. It also analyses reviews to verify trustworthiness.

Brigid
5.0 out of 5 stars Review
Reviewed in Australia on 24 February 2021
A great story. Lots of twists and turns, along with action, adventure, betrayal, romance and love. Enjoyed the extended epilogue too
Read more
Helpful
Report abuse
See all reviews

Dbld
2.0 out of 5 stars Highlander Drama
Reviewed in the United States on 7 January 2022
Verified Purchase
I really had trouble reading this book. A brother was killed and the heroine offered herself in marriage so that they could avoid a war. Eventually the hero agreed and they were married. He slept on the floor and she the bed and she was confused as to why he wouldn't consummate the marriage. He had a mistress is why. There are no scenes between them, and you never know her name either, but he was with her for half of the book before the heroine told him that she would not tolerate it anymore. He said he loved the mistress before he was forced to marry. He did give her up and he consummated the marriage. Of course it was wonderful. They started respecting each other. Then his clan wouldn't accept her and she expected him to back her up but he didn't. She sees him in the courtyard with another woman but supposedly he is just telling her he was finishing it with her. Then he is betrayed by his own clan. And I just got bored with the story. I will read her again but I hope that it has a more solid plot. There is an HEA
Read more
Report abuse

Crystal L.Butler
5.0 out of 5 stars War between clans
Reviewed in the United States on 2 September 2021
Verified Purchase
Niall Laird of Calbraiths was having problems with bandits killing and ravishing his people. His son Ruairi takes it upon his self to take men out in the night to catch them coming home so proud that he killed one of them only to find out it was the heir to clan Mcgory. Maura Niall’s daughter and twin to Ruairi offers her self to marriage to Kevan from clan Mcgory who was made Laird after the heir was killed. Exceptional story.
Read more
Report abuse

dragonheart
5.0 out of 5 stars Great book
Reviewed in the United States on 26 April 2021
Verified Purchase
Awesome adventure. The characters were wonderful and intriguing! I loved how Maura input her opinions and suggestions! Also how Maura took charge to try to keep everyone safe. Thank you for sharing your adventures with me!
Read more
Report abuse

Victoria
5.0 out of 5 stars Very very good
Reviewed in the United States on 25 July 2021
Verified Purchase
I loved this novel as I love this author. It was an entertaining story of war, fighting, power, greed, family and love
Read more
Report abuse

Georgeen G.
5.0 out of 5 stars Excellent Read!
Reviewed in the United States on 28 February 2021
Verified Purchase
Absolutely loved this story. The characters were so real, and the storyline so uplifting, it was impossible to stop reading.
Read more
Report abuse
See all reviews
Back to top
Get to Know Us
Make Money with Us
Let Us Help You
And don't forget:
© 1996-2022, Amazon.com, Inc. or its affiliates