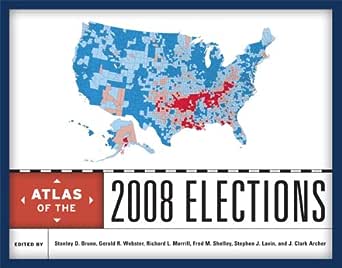 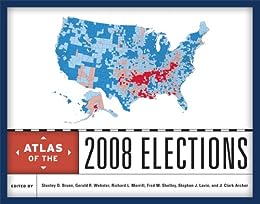 Atlas of the 2008 Elections Kindle Edition

A superb and richly illustrated explanation of the spatial and temporal differences in the U.S. electorate. The maps help to disentangle characteristics of the population from settlement patterns in the United States, which helps answer the perennial question of why the map of state-level election results is so red but the election is so close. It should be read by geographers, geography students, political scientists, the electorate, and the campaign staff of both major political parties.--Geographical Review

Brunn (Cities of the World) and coeditors Gerald R. Webster, Richard L. Morrill, Fred M. Shelley, Stephen J. Lavin, and J. Clark Archer--all professors of geography at institutions across the United States--here present ten chapters of geographical and political perspectives on the 2008 U.S. presidential election, with nods to views from other disciplines such as history, economics, and sociology. Also examined from those standpoints are six other races, including important senatorial and gubernatorial quests; eight statewide referenda; four votes of the 111th U.S. House of Representatives; and topics such as primaries, campaigns, general elections, and regional patterns. Each chapter's accessible narrative is accompanied by several well-rendered maps (for a total of more than 200)--the combination serves to clarify issues of interest in the 2008 election in a way that is unmatched by other works. The editors close with ten scenarios that could positively influence national elections, e.g., public financing of presidential elections and abolishing the electoral college. BOTTOM LINE This title succeeds at making political geography accessible and demonstrates the power of the discipline in relation to questions of social science. It is an excellent addition to most higher education and large public library collections because of its clear, attractive visual style and easily understood information.-- (09/15/2011)

Much effort and care has been put into determining what should be mapped, and how, and providing a substantial textual commentary involving fifty-one different authors. The result is a handsome product.--AAG Review of Books

Political geographers use three contexts to study elections and political behavior: demographic (men vs. women, young vs. old), where people live (urban vs. rural), and proximity (people tend to make voting decisions similar to those nearby). The 200 maps here describe an election that was historic in that it was the first election of a Presidential candidate of African American descent and was marked by an unprecedented interest and high turnout of voters and widespread use of social media. Each of these ten chapters contains maps and narrative primarily depicting voting patterns at the national level from the primaries to the final returns. There's even a suggestion that changing Election Day to two days in September would raise turnout.--Library Journal (Reference)

This atlas presents 200-plus visually engaging and deeply analytical maps and narratives about the 2008 elections. Contents include an introduction and nine chapters with national/state maps, and essays that explore major issues or describe the maps. Chapter 2 focuses on the nomination process with maps that depict primary selection processes and voting patterns. Chapter 3 contains maps that show key features of the campaign itself, e.g., campaign stops made by McCain and Obama leading up to the election (a fascinating way to visualize candidates' frantic travel patterns). Chapter 4, the most substantive, features a large number of maps and essays about the results of the presidential election. Maps are included for other party candidates as well. Chapter 5 breaks down regional voting patterns by comparing 2004 and 2008 election results. Chapter 6 analyzes key demographic, occupational, and socioeconomic indicators, emphasizing highest- and lowest-ranking data that reflect broader social, economic, and cultural trends nationwide. Chapter 7 looks at various statewide elections for governor and for state legislatures; it assists the process of comparing and contrasting national election results with state election results. Chapter 8 shows the results of key referenda on issues such as stem cell research and same-sex marriage. Chapter 9 focuses on voting patterns for key issues in the 111th House of Representatives in 2009 and the rating of House members by special interest groups. Chapter 10 outlines ten scenarios for the 2012 elections. The quality of the contents and analysis in this affordable, well-referenced work should inspire new research. Summing Up: Highly recommended. Lower-level undergraduates and above; general readers.--CHOICE

This beautifully executed work uses maps, charts, and text to effectively analyze and communicate the interplay of political forces and geography in the 2008 elections. The atlas is divided into 10 chapters, each with maps and commentary. Chapters 2 through 6 focus on the presidential election, describing the outcomes of the primaries and caucuses that led to the nominations of Senators Obama and McCain, their election campaigns, media coverage, and endorsements. Election results are analyzed at the state and county levels, then by region, with an emphasis on swing states. Comparisons with the 2004 election are provided. Socioeconomic indicators are examined by focusing on the extremes--the 200 counties with the highest and lowest rankings on selected variables. The resulting maps and narratives effectively portray the effect of variables such as military presence, education, in- and out-migration, employment by economic sector, creative class employment, race, ethnicity, and income on the election outcome. Chapter 7 examines selected campaigns for Senate seats and governorships, while chapter 8 discusses the geography of voting on several state referenda involving controversial issues, including same-sex marriage, abortion, and physician-assisted suicide. Chapter 9 focuses on election results at the congressional-district level and analysis of several important 2009 House votes. Finally, chapter 10 offers 10 brief scenarios about the American electoral landscape. The 200-plus maps are the heart of this work, of course, and they do not disappoint, effectively using a wide range of colors, clear captions, and a variety of mapping styles. The atlas ends with a sampling of bumper stickers and commemorative stamps that evoke nostalgia just three years after the election. The index covers, and effectively differentiates, graphs, maps, tables, and text. Much more than a reference work, this atlas will engage the casual reader as well as the political junkie. Recommended for all public, academic, and middle- and high-school libraries--many libraries will want to add a copy to their circulating collections as well.--Booklist, Starred Review

An outstanding set of analyses of voting in the 2008 election and related subjects. With beautiful, provocative maps and concise, readable, and historically informed interpretations by experts, this book will be the recognized authority on the subject.--James Allen, California State University, Northridge

Scholars and practitioners have long understood the interplay of political forces and geography. This dynamic was on vivid display in the 2008 presidential election, and much of it has been captured in this important new volume. Primaries and caucuses, referenda and ballot initiatives, Electoral College forces and much else, this new atlas provides those truly interested in 21st-century presidential elections a treasure trove of information. And my goodness, what maps!--Daniel M. Shea, Allegheny College --This text refers to the hardcover edition.

S Miller
5.0 out of 5 stars Great Atlas
Reviewed in the United States on 25 May 2014
Verified Purchase
This book is filled with maps of varying states and counties that help you digest the election data of 2008 better.

The publisher's website states that the 2012 atlas will be published in August 2014.
Read more
Report abuse
See all reviews
Get FREE delivery with Amazon Prime
Prime members enjoy FREE Delivery and exclusive access to movies, TV shows, music, Kindle e-books, Twitch Prime, and more.
> Get Started
Back to top
Get to Know Us
Make Money with Us
Let Us Help You
And don't forget:
© 1996-2020, Amazon.com, Inc. or its affiliates